Addis Abeba, August 16, 2019 – As Ethiopia is preparing for parliamentary elections come next year, a striking feature of the political landscape is the total absence of a clear leftist alternative. All the parties currently active in Ethiopia are anchored in different forms of identity politics, (most of them either aligned with a distinct ethno-nationalist or pan-Ethiopianist ideologies) or the new and yet to be tested alternative of ‘citizenship politics.’

This is all the more surprising given how a recent spike in identity-based political violence have led to a national soul-searching. Unsurprisingly though, the impulsive response by many to the division and violence is either advocating for constitutional change or the pursuit of some form of unity or (to some extent) the continuity of the status quo.

But instead of taking a rigid, dogmatic and binary approach to questions of unity and ethno-nationalism, we should critically try to separate the chaff from the wheat in regards to both. The politics of ethno-nationalism has morphed into competing and short-sighted ethno-hegemonic projects, while its supposed antidote, pan-Ethiopianism, has either lost touch with today’s Ethiopia or lacks progressive articulation, therefore unlikely to serve as an alternative.

Neither of the two predominant and polarized narratives are feasible while many consider the new political phrase in town, ‘citizenship politics’, as a mere polished version of the old, hegemonic pan-Ethiopianism.

The solution lies in choosing and prioritizing the more constructive form of political cleavage that is class politics.

Ethno-Nationalist Political Organization: A Costly and Ineffective Path to Justice and Equality

After half a century of experimenting with ethno-national political mobilization, it is now time to reflect on the costs and benefits of this form of organization. It is necessary to first of all distinguish the institution of ethno-national federalism and the objective of its equality from the strategy of political mobilization it pursued in the last half a century.

Most of the demands made by ethno-nationalist activists – apart from territorial claims – could be framed in cross-ethnic and principled or abstract terms such as minority rights, land rights and the right for linguistic justice, among others, rather than exclusively from the vantage-point of particular groups. Unless mobilizing along ethnic lines is an end in itself, we have to ask how many distinct Oromo, Amhara, Tigrayan, or Somali political questions and demands are there in today’s Ethiopia. The protests sparked by the Addis Abeba master plan expansion project could, for example, have been framed as one of farmers’ land rights – given that displacement for development is common across all of Ethiopia – instead they became framed as the “Oromo Protests.”

The protests managed to trigger tectonic changes in Ethiopian politics, so one might be inclined to question the rationale of fiddling with something that is not broken. The Oromo Protests are in fact a good example of the costliness of ethnic mobilization. The EPRDF’s land management policies and practices have created dissatisfaction amongst urban residents in Addis Abeba, as much as amongst farmers in Oromia and other parts of the country. These practices have moreover generated sympathy amongst a great number of Ethiopians for the victims of these policies. Sadly, the grievances of Oromo farmers was framed and understood as an Oromo issue, and instead of nation-wide protests and pressure, most of the country – including Addis Abeba’s population – remained passive onlookers as Oromia’s youth paid a heavy human price for three consecutive years.

Another tragic example is the displacement of people on identity grounds. When Ethiopians of different identity backgrounds were being evicted from various places, activists and politicians – who were perfectly informed of the state-wide nature of this problem – portrayed their cases as a unique conspiracy against their own group rather than a national problem. Despite all the rhetoric and bravado, the ethno-nationalist politicians achieved very little in regards to ensuring the safety and rights of their ethnic peers. Instead of doing the challenging work of formulating strategies for managing the violence, displacements, and land rights they chose the easy route of agitating emotions, fueling inter-communal tensions and externalizing the problems.

The one strategic measure that ethno-nationalists have been able to come up with are short-sighted and banal ethnic-alliances. These alliances are never based on principles, but rather on convenient and short-term calculations. Unsurprisingly when the common ‘enemy’ is defeated the alliances collapse, and the activists then scramble to come up with a new alliances.

Beyond inefficiency, this mode of political organization and mobilization has implications for our security if not our very survival as a community. The morality of only sympathizing with humans who speak your mother tongue at the expense of total indifference to the suffering of others is a signature function of ethno-nationalism.

Given the high human cost of this politics we need to ask the following questions: How much justice, security and equality has been achieved through this form of mobilization over the past decades? And what is the end-game? Is there a goalpost when we concede that this form of politics is redundant? Or do we envision a permanent condition of competition for status, material and political resources along ethnic lines?

The Futility of the Pan-Ethiopianist Alternative

The alternative competing form of organization has been unitary nationalism or pan-Ethiopianist organizations. Its disciples like to think that it is a civic form of nationalism. They perceive themselves as civilized, rational and above and beyond identity politics, which they contrast with the tribalist, emotional and narrow-minded ethnic nationalism.

If there is anything in between, it is yet to articulate itself and its purposes. But insofar, unitary nationalism is the mother of all identity politics in Ethiopia. As many have pointed out before, far from being culturally or ethnically neutral, it idolizes a particular form of cultural identity and history – namely, the Abyssinian Orthodox identity. It is in reaction to this assimilationist and hegemonic nation-building enterprise that the ethnic nationalist alternatives were borne. And to this day it is the reckless, aggressive and tone-deaf nature of this nationalism that continues to fuel ethno-nationalism throughout Ethiopia. Ironically, it is a great danger to the very unity it seeks to promote.

The traditional unitary nationalist model has proven itself ill-equipped for constructing community. Instead of thinking realistically and strategically about how to construct a community of the willing, it takes the existence of a community for granted, and resorts to criticizing those that refuse to join of failing to understand ‘history’ (as if history is a science instead of a deeply political interpretative exercise).

But what this camp fails to appreciate is that few Ethiopians are against unity per se; what we differ on are the terms and nature of this unity. Particularly, whose history, whose language and whose culture becomes ‘the national’ or collective identity.

The Ethiopianists are also strategically disadvantaged – while ethno-nationalists only have to convince members of their own group to be ‘successful’, the Ethiopianists have to convince members from all ethnic groups. Tactically, instead of trying to listen, empathize and persuade the followers of ethno-nationalism they try to force them into submission by belittling and chastising them.

Unity can assume many forms, and what the Ethiopianists have to ask themselves is if they are willing to tone down their Abyssinian hegemonic nationalist discourse for the sake of community with other Ethiopians.

Class Cleavage as a constructive form of political conflict

Second to unitary nationalism, the absence of class politics is probably the most enabling factor for ethno-politics to flourish. In other words, the ethnic politics proliferation process is as much caused by supply side factors as the popular demand for its mobilization. If political and intellectual elites are unwilling or unable to draw attention to other ideological divides, then ethnicity or the unitary-federalist polarization will remain the only available agenda

We need to move away from the historical ethnic and unitary nationalist dichotomy. Ethiopian, Tigrayan, Oromo, Somali and other nationalisms are – despite their claim to timelessness – all modern constructs. Instead of placing ourselves in one camp and take part in the trench-warfare of identity politics, we should think creatively about alternative forms of political organization

On the surface, EZEMA’s idea of a politics based on ‘citizenship’ is a laudable attempt at overcoming the identity politics cleavages. However, it too suffers from the same delusion as the Ethiopianists of being the anti-thesis to ethnic politics. No one in Ethiopia is opposed to citizenship rights, and it is most certainly compatible – if not integral – to ethno-nationalist politics.

Perhaps the problem has been the pursuit of unity. Instead of pursuing the castle in the sky – which is coming to an agreement on what the Ethiopian nation has been, is and ought to be – maybe we should focus on prioritizing a different political cleavage that can make ethnicity a secondary concern.

When pursuing ‘unity’ we should think about how it relates to the concept of the political. According to the German political theorist Carl Schmitt the essence of the political is the friend-enemy distinction. Based on this notion (and without embracing the broader claims in his philosophy) the very idea of a politics based on unity is an oxymoron. Politics is about (non-violent) conflict, ideational differences and competition for resources. We can compete for resources and power based on many cleavages. Each individual has multiple interests – ethnicity is just one of many. Socio-economic class interest is one such category, which we have conveniently ignored.

As inequality increases the need for political representation based on socio-economic differences is becoming paramount. Indications of this is the increasing number of protests led by professional associations. The different public reactions to the Ethiopian government’s decision to privatize state-owned enterprises and move away from the developmental state economic model did furthermore illustrate that economic ideology is a political cleavage that has the potential to take center stage in the political landscape – if we choose to prioritize it.

Ethiopia’s shades of identity politics deliberately obscures and conceals conflicting material interests within different groups. Identifying and highlighting these differences and conflicting interests does not only serve the instrumental purpose of creating cross-ethnic political agenda and move the excessive attention away from ‘emotional’ politics of recognition and violence inducing toxic discourses, but is a moral imperative in its own right.

Inequality is likely to continue to increase, together with a transition to political liberalism, Ethiopia faces dangerous prospects. It is imperative that the political parties and activists highlight and make these class cleavages the basis of the party mobilization and the center of our politics. AS

Editor’s Note: Goitom Gebreluel is a PhD candidate at the University of Cambridge, where he studies the international relations and comparative politics of the Horn of Africa. His publications have appeared in the Washington Quarterly, the Yale Journal of International Affairs and Foreign Affairs. 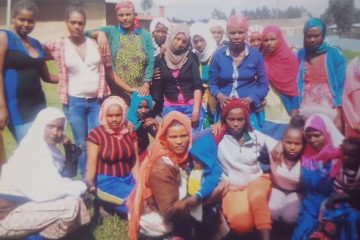