Mahlet Fasil
The Ethiopian federal high court fourth criminal bench today sentenced eighteen Ethiopian Muslims including four members of Ethiopian Muslim arbitration committee members, one journalist and thirteen others to a lengthy jail term between seven and 22 years. The eighteen Muslims were charged on counts that include attempted terrorism, conspiracy to establish an Islamic state, and public incitement.

The court passed a guilty verdict on all of the on July 6th and adjourned the sentencing until Aug. 3rd. Accordingly the first defendants, Abubakar Ahmed, Ahmedin Jebel, Yasin Nuru and Kemal Shmsu were sentenced to 22 years each. Accordingly, defendants Bedru Hussien, Sabir Yirgu, Mohammed Abate, Abubeker Alemu and Munir Hussien were each jailed for 18 years. The court also sentenced Sheik Mekete Muhe, Ahmed Mustefa Sheik Seid Ali, Mubarak Adem and Khalid Ibrahim were jailed for 15 years each; while while defendatns Murad Shikur, Nuru Turki, Sheik Bahiru Omar and Yusuf Gentachew were jailed for less terms of seven years each.

Photo caption: Muslim protestors in solidarity with the accused carrying a placard that reads: “standing up for  justice is not radicalism”

The Obama on a third business date with Africa

Exclusive: “I told [your Prime Minister] that a real leadership doesn’t depend on repression” Gianni Pittella 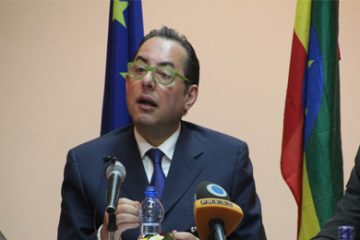