Security Plan scheduled to be signed this morning at the AU summit was not rejected, according to Ambassador Boubacar Diarra, special Representative of AU to the Great Lakes Region. However, Mr.Diarra said there was a need for more time to review the pan.

The security plan proposed by the UN to end conflicts in DRC, where rebel groups captured the key city of Goma in November 2012 and still have control of significant territories, was expected to be signed this morning in the presence of UN Secretary General Ban Ki Moon and eight heads of state: DR Congo, Rwanda, Angola, Burundi, Uganda, Republic of Congo, Tanzania and South Africa from southern Africa.

He also rejected rumours that a few heads of state had contested ambiguous points in the plan: “They understand the need for the UN to come and help both in political and military sides,” stated Diarra.

Expectations were high for the leaders from African Great Lakes region to sign the agreement that was hoped to bring to an end one of Africa’s long standing conflicts that has recently engulfed eastern Democratic Republic of Congo, where the rebel group, M23, has made significant gains.

Last year, a document by the UN has accused the government of Rwanda of arming M23 rebels.

UN chief Ban ki Moon indicated that talks are still continuing as the issue in DRC is very complex but haven’t given any details regarding the security plan itself.

According to Mr.Diarra, representatives of M23 expressed their concerns that the decision passed after the peace talks in Uganda has not been implemented.

“In the course of our discussions, some member states expressed some desire [that] they needed some more time. I don’t think it will take long time. They [the leaders] are all very much committed,” he said. He however expressed his concerns about what he calls “perception issues” about the UN mission in DRC.  There are some “incorrect perceptions about the mandate [and] function of the UN mission.”

According to reports the South African government wants its own peace proposal in light of what it calls an elaborated mandate by the UN in one of its old peace keeping missions in the region.

South Africa also expressed its concern that it has not been consulted on the peace plan. Speaking to journalists, its foreign affairs minister said her government was given the documents only delegates led by its president Jacob Zuma arrived to participate in the on-going AU summit.

“When we arrived, to our surprise, we received a letter that states that South Africa will be one of the signatory to some framework that supposedly is seeking a solution to DRC. It was a surprise as that wasn’t a document that has been negotiated,” said South Africa’s foreign Affairs minister Maite Nkoana-Mashabane.  However, Ms. Nkoana-Mashabane admitted “there may not be a problem with the documents but the way it was communicated would have a serious problem amongst ourselves as member states of both SADC and ICTLR. ”

However, sources close to the matter told Addis Standard that South Africa has disputed the framework of the peace plan itself saying it gives an unprecedented and elaborated mandate to the UN Mission in DRC, MONUSCO. 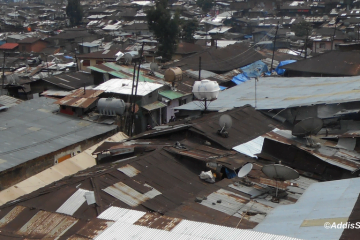