Addis Abeba, February 25/2020 – The government said it has discontinued criminal charges against 63 individuals who were arrested and charged with various criminal charges in the wake of a crack down launched by the administration of Prime Minister Abiy Ahmed.

Speaking to the national TV, EBC, last night, Nigussu Tilahun, Press Secretariat at the office PM Abiy, said the charges were terminated against the individuals in order to broaden national understanding.

Among lists Addis Standard confirmed include are business mogul Erimias Amelga, who was accused of selling Imperial Hotel an an inflated price to METEC. On January 15/2019, he told the presiding judges that Access real Estate S.C had bought the hotel for 60 million birr and explained that his share of the hotel was a mere 5% in what was owned by more than 6, 000 shareholders. He also insisted he has cooperated with the police to provide all the necessary information regarding the transaction. “I drove myself to the police but they arrested me.” Ermias also expressed his reservations that the police office who took his witness testimony was the same police officer “who detained me for 128 days without evidence of a crime.” However, he remained in prison until now.

The other high level profile detainee to be released is Biniyam Tewelde who was one the few high level officials to have been detained soon after PM Abiy Ahmed came to office. He was subsequently charged with corruption in which prosecutors accused him of conducting a 72 m birr worth contract with Avorniga Technologies Limited, an Israeli company, and withdrawing 32.4 m birr by conspiring with the company for training services that didn’t happen. He is also accused of illegal wealth accumulation.

Christian Tadelle, former PR officer of National Movement of Amhara (NaMA), who was charged with crimes against the constitution & constitutional order. He was one of the 13 individuals suspected of involvement in the June 22 high-level officials assassinations.

Businessman Alem Fitsum, owner of Alemgenet steel factory and Four Points by Sheraton, a hotel under construction around Meskel square in in Addis Abeba,is among those to be released. He was arrested in Nov. 2018 and was subsequently charged on suspicion of corruption.

Others include Zemzem Hassan, who was the 43rd defendant in Abdy Illey’s file from #Somali region as well as Assistant Professor Tessema Elias, Samuel Belayneh & Addis Kamisa from regional state, who were detained in connection with Sidam zone crisis.

Please click here to get the full list of the 63 individuals as was released by the Attorney General’s office. AS

Op-Ed: Why Ethiopia's decision to skip the ever complicating GERD talks in Washington is right 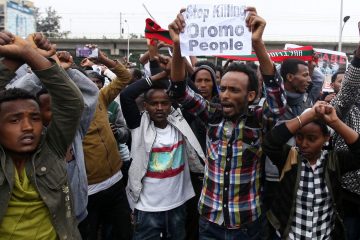