Addis Abeba, August 28/2018 – Schools. Factories. Courthouses. These are just a few of the buildings that now act as shelters for displaced families in southern Ethiopia after a wave of inter-communal clashes along the border areas of Gedeo and West Guji zones drove nearly one million people from their homes.

“We came here because we were attacked,” said Tigist, who fled her home in Hanchabie village. “We left our village empty-handed to save our lives. We travelled and spent three days in the bush to get here.”

People often lack food and clean water and are sleeping on the floor with no blankets or mats. Kochere district in Gedeo zone has seen its population nearly double from 130,000 people to more than 230,000.

“We have seen an awful lot of people…having to move in the face of violence in a very short space of time,” said James Reynolds, ICRC’s Head of Delegation in Ethiopia. “They have moved to public buildings—schools, training centers as well as being hosted by families in the areas to which they’ve moved—so obviously, when something like that happens, the conditions in which those people are living are really very, very difficult.”

The influx of displaced people has also put a heavy strain on host communities, many of whom were already struggling with food insecurity. Hospitals and clinics have also been overwhelmed by the sharp increase in patients.

“We have seen health centers in the area faced with an enormous problem,” said Reynolds. “They were working ok, but suddenly, they’ve got more than double the population coming in and many, many of those people who are coming in are sick already.”

The dismal living conditions faced by many of the displaced put them at-risk of malnutrition and potentially deadly diseases.

“My husband got sick here and I could not help him,” said Tigist. “Since I left empty-handed, it was not possible for me to take him to the hospital for treatment…I intended to go out and beg, but I felt shy…[H]is health deteriorated further, and finally he died.”

The International Committee of the Red Cross (ICRC), together with the Ethiopia Red Cross Society, is working to improve basic living conditions and protect the health of the displaced in Kochere district, Gedeo zone by distributing blankets, sleeping mats and other household items, improving access to safe drinking water, and providing health centers with medicines and medical supplies.

“We have been providing them with additional basic medicines to enable them to treat as well as they can those who are sick,” said Reynolds. “We have done some upgrades on the water supply in the main areas where you’ve got concentration of IDPs, of displaced persons, just to enable a supply of clean water to be accessible to people. And for about—the majority those have been delivered—12,000 people, about 70 or 80,000 people all together, we’ve been giving out shelter kits.”

While aid has increased in recent weeks, it is still insufficient to meet the needs of the displaced. With schools being used as shelters and so many children still displaced, it could also be difficult for students to return to school when the new academic year starts in September. At the same time, some people do not feel safe to return home, while others lost their homes in the clashes, giving them little go back to.

“I want to go back to my village but I am afraid because I am alone now,” said Tigist. “There are also others who lost their husbands like me. It’s frightening to go back.” ICRC 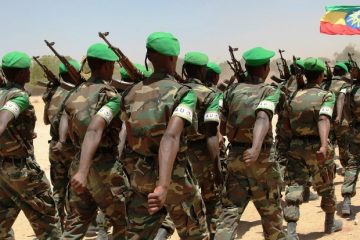