In the 1860s,an English discoverer named C.T. Beke proposed to construct a 225-mile railroad to open up trade with the southernmost territories ruled by the Pasha of Egypt who nominally reported to the Ottoman Empire. His motivation was to provide ready access to source from the cotton fields of Ethiopia, connecting the coast of the Red Sea with the Upper Nile Valley. Nearly 150 years later, the Ethiopian Government, through its Growth and Transformation Plan (GTP) that seeks to raise GDP by 11-15 percent per year in the 2010-2015 period, is engaging in massive industrial and infrastructure projects; a 1,500 mile-long standard gauge rail network that will help overcome the landlocked country’s infrastructure limitations and render a national trade logistics strategy viable being among them.

The textile and garment industry has strategic potential for Ethiopia

The textile and garment industry is among the sectors especially incentivised by the government (i.e., with tax holidays and capital goods imported free of duty)and it plays a central role in its strategy (i.e., other sectors include agro-processing, chemicals, cement, metals and mining, and pharmaceuticals). The first textile and garment factories in the country were established back in 1939.

Today, Ethiopia’s government is keen to see the apparel industry reach exports of USD 1 billion by 2016, and isactively inviting other countries and major industry players to invest. The industry has the ability to absorb relatively low-skilled labour into formal-sector jobs, which is attractive in any developing country where the bulk of the economy is still informal. With textile and apparel exports valued at USD 84 million during the first nine months of the 2013-14 fiscal year, growth may take longer, but high ambition and the underlying potential are observable now. Due to its very significant cotton production potential in higher altitudes (between 1000 and 1400 metres)—provided that irrigation compensates for lack of sufficient rainfall—Ethiopia has the ability to establish a complete textile and garment supplychain, which is unlike some other major sourcing hubs that need to import most of the inputs.

The country’s proximity to European markets provides a major locational advantage; provided Ethiopia can develop more efficient logistics, and possibly additional trade corridors, to reduce reliance on the port of Djibouti to handle exports. Ethiopia will also need to boost its negotiation capability with neighbours, as well as the ability to use alternative transit corridors.

Ethiopia’s building out of its textile and garment industry is occurring as the industry itself is under major pressure to rethink its supply chain practices in the aftermath of the Rana Plaza factory collapse in Bangladesh last year, where over 1,100 workers tragically died. This tension has implications for the development of a national cluster.To begin sorting through the magnitude and complexity of the opportunities and challenges facing the industry—factors that it had thus far insufficiently diagnosed and addressed with similar inadequacy—as well as map a more effective way forward, Impact Economy released last December a report titled “Creating Sustainable Apparel Value Chains” (available in multiple languages). The report provides a close-up examination of the USD 3 trillion (and counting) global textile and garment industry. The industry has been a source of economic progress since it kicked off the industrial revolution in the United Kingdom more than 250 years ago—but is has also been tarnished by poor labour conditions and a heavy environmental footprint.

Off shoring, fast fashion, and rising social & environmental performance standards are changing the rules of the game

Over the past two decades alone, the industry has undergone deep change driven by: a movement from slow to fast fashion. Today’s fashion products need to move very quickly from the catwalk to high street stores in order to quickly and cheaply cash in on current fashion trends; The offshoring of production from advanced to emerging economies. This development is increasingly moving away from the European Union, United States, and Japan, and toward the Association of Southeast Asian Nations (ASEAN)—absorbing millions of unskilled workers into formal employment and stimulating entire economies in the process; and a move to greater transparency about the industry’s social and environmental impacts. Advocacy groups, greater consumer consciousness, environmental compliance requirements, and corporate responsibility initiatives as well as the role model effect of more ambitious social and environmental performance goals at companies such as Patagonia, are collectively prompting changes here.

Foreign companies are entering Ethiopia. For example, Turkey-based Akberis constructing the country’s largest textile plant (i.e., worth USD 175 million), the India-based ShriVallabh Pittie (SVP) Group is setting up a USD 550 million spinning mill, and the Chinese textile company Zhejiang Jinda Flax Llc aims to develop an entire textile industrial zone. All of these developments are taking place against the background of an overall industry that is actually less sustainable today than it has ever been.

As is highlighted in the report, four levers in particular can enable industry transformation and thereby rewrite the rules of competition and impact, namely:

Any next generation strategy for the industry will need to consider the entire supply chain in order to foster total resource productivity and transparency; Impact investing, the topic of a previous article in this series, can critically drive needed upgrades to industry infrastructure around the world, and help Ethiopia avoid the mistakes made elsewhere and that now need to be remedied at great cost; Improving working conditions, with a particular emphasis on the gender dimension, while striving for a new level of ambition is a critical component for achieving a textile and garment industry that performs competitively and meaningfully in terms social and environmental impact; and Finally, replicating the best practices of leading players, or otherwise getting involved in pilots or partnerships, can provide a meaningful way to keep costs low while also turbo-charging efforts.

For the rising textile and garment cluster in Ethiopia, unlocking a win-win of raising productivity and competitiveness, as well as social and environmental performance, is especially exciting because doing so can multiply the development dividends.

As major retailers set up sourcing offices and producers build the industry infrastructure, the procedures and infrastructure being put in place now should be commensurate with global best practices. These standards will dominate for years to come so they should also be consistent with the overall direction of the industry.

The 225-mile railroad between the Red Sea and the Upper Nile envisioned 150 years ago would have connected Ethiopia’s cotton fields with the Egypt of Ismail Pasha. Today, Ethiopia has an equally significant opportunity to make the kind of large step forward that only comes along once in a generation. A modern textile and garment industry that applies global best practices can be one of Ethiopia’s finest assets as the country builds its middle-income future. The key now, though, is to get it right.

Ethiopia is part of the “EMICs” (Ethiopia, Myanmar, Iran, and Colombia), a new set of high-opportunity countries with exceptional potential for modernization. Successful modernization of Ethiopia could have far-reaching positive geostrategic implications and further synergistic effects with development efforts occurring in the Horn of Africa. Building world-class industries is key to achieving such a preferred future. In this exclusive Addis Standard series, Impact Economy’s Dr Maximilian Martin covers content discussed at the 4th Impact Economy Symposium & Retreat held two weeks ago in Switzerland, where Ethiopia was one of the focus countries. The event annually convenes key influencers, thought leaders, and practitioners from the worlds of investment, business, government, and philanthropy in order to surface the most effective solutions, innovations, and opportunities that have surfaced in the promotion of impact. The strategy for achieving a sustainable textile and garment industry was one of the core topics explored.

Maximilian Martin, Ph.D., is the founder and global managing director of Impact Economy, an impact investment and strategy firm based in Lausanne, Switzerland, and the author of the report Creating Sustainable Apparel Value Chains.

Exclusive: I told them I can move a mountain if I wanted to - Mulu Solomon 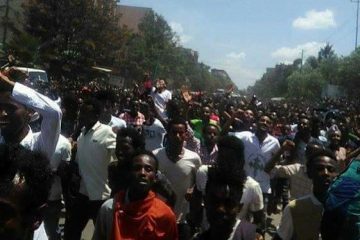