Addis Abeba, December 29/2017 – The Federal High court 19th criminal bench has today rejected the request by Dr. Merera Gudina’s defense team to declare as invalid the latest addition of audio,video and photo evidence by the prosecutors team against the defendant.

On December 25 prosecutors have submitted to the court ten more CDs claiming they contained additional audio/video and photo evidence against Dr. Merera Gudina, Chairman of the opposition Oromo Federalist Congress (OFC). Dr. Merera is facing trials after having been accused of multiple criminal charges including charges of  attempt to overthrow the constitutional order by violence.

“I am charged for inciting public protests to which senior government officials took the responsibility and apologized for saying the protests were caused by maladministration. Local elders, Priests and Imams have all been trying to mediate and pacify the protesting youth. So why am I staying in jail for that?” Dr. Merera asked the court up on the verdict.

On October 16, Dr. Merera Gudina has entered a not guilty plea against all charges brought by the federal prosecutors. The court then decided to begin the hearing for prosecutor’s witnesses as of Nov. 03/2017.

It is to be remembered that after having being denied access to the list of prosecutors witnesses, on July 07 Dr. Merera’s defense team had requested the court to get the full list. The court then refereed the request to the council of the house of federation for constitutional interpretations, which dragged the case by months. The council of the House of Federation ruled that witness protection was not in violation of the constitution and that the court can proceed the hearing while protecting the identities of prosecutor’s witnesses.

The court began witnesses hearing without having to avail the full list of witnesses to Dr. Merera Gudina’s defense team.

Dr. Merera Gudina is in jail since December Nov. 30/2016 when he was detained by security forces upon arriving at Bole International Airport after touring Europe for more than three weeks during which he delivered a speech to members of the European Union Parliament. He appeared at the EU parliament to testify on the political crisis and human rights violations in Ethiopia. Dr. Merera was joined by two other prominent invitees: Dr. Berhanu Nega, leader of the opposition Patriotic Ginbot 7 (G7), which is designated by Ethiopia’s ruling party dominated parliament as a “terrorist organization” and is now actively fighting the regime from the northern part of the country, and athlete Feyisa Lilessa, Olympic silver medalist who gave a significant impetus to a year-long Oromo protest that gripped Ethiopia when he crossed his arms in an X sign at the finishing line.

The judges have adjourned the next hearing for January 01/2018 to give a verdict on whether or not Dr. Merera’s defense team would be allowed to get access to the new set of evidence. AS

Ethiopia’s Constitution: Can it stand the test of time? 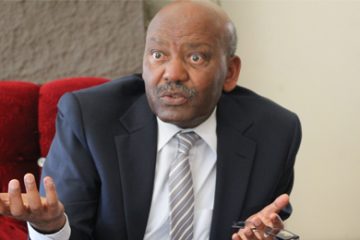