According to the charges in the file name of Miftah Sheikh Surur, and was given to the 76 suspects this morning at the Federal High Court 19th Criminal Bench, the accused, who the charges allege were members of the “Eritrean based rebel group Patriotic G7,” have participated and/or attempted to participate in several acts of terrorism in western Tigray zone of northern Ethiopia in places including, but not limited to, Metama, and Quwara; as well as in Woredas such as Wolkayit, Tsegede, & upper & lower Armachiho.

The charge, which was given to all the accused this morning, also states that the 76 were apprehended in Kafta Humara Woreda of western Tigray zone along with arms including 37 machine guns and hundreds of ammunitions, bombs and various types of military equipment. It further accuses the suspects of killing two security forces; attempt to violently overthrow the constitution; attempt to disrupt the import of oil from neighboring Sudan; attempt to establish a military base in Quwara woreda of western Tigray; and inciting civil servants to participate in recent anti-government protests in northern Ethiopia.

Protests in Amhara regional state in northern Ethiopia began in July 2016 when a confrontation between members of the “Wolkayit committee” and the police flared up as the later attempted to arrest leaders of the committee.

In what several members of the ‘Wolkayit community’ in north western Ethiopia say was a forced decision by the federal government, the Wolkayit people were made to join the Humera administrative zone in Tigray regional state following the ethnic based federal arrangements of the early 1990s. However, community members continued protesting saying the decision was not only an administrative decision but also one that affects their question of identity.

The incident turned into subsequent deadly protests in several parts of major cities in the Amhara regional state including Gonder and Bahir Dar, a popular tourist destination and the region’s capital respectively, which in turn led to sustained armed movements that are still ongoing in various parts of the region.

In January 2017 prosecutors have brought terrorism charges against activist Nigist Yirga, who was seen wearing a T-shirt reading “the People of Amhara are not terrorists,” during the protests. Nigist is charged with five others and is appearing at the Federal

The Federal High Court 19th Criminal Bench adjourned the next hearing for Miftah Sheikh Surur et.al on March 08, during which the court will read the charges to the accused. The court also ordered the police to hand over the accused to the federal prison administration. AS

Photo- Protesters in Gonder city in the last week of August 2016. 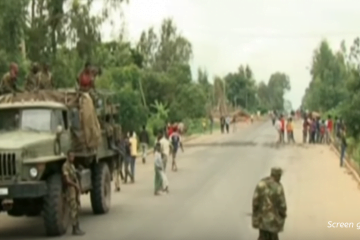