Addis Abeba, January 26/2018 – This week has seen a return to the killings of civilians by Ethiopia’s security forces following protests in east and northern parts of the country; a massive anti-government protest was also held in southern Ethiopia.

On Monday, one civilian was killed and three more wounded in Moyale town, in Guji zone in southern Ethiopia, when security forces opened fire at a group of youngsters returning from a local football match, according to  VOA Amharic, which quoted Hussein Guyu, the local administrator. The federal security forces were involved when a skirmish erupted following the football match.

And on Tuesday January 23,  at least three people were killed in Dugda Bora (Alem Tena) Woreda in east shewa zone of the Oromia regional state. According to Boran Hunde, a resident in the nearby Mojo town who spoke to Addis Standard , protesters took to the streets on Tuesday to “demand for justice” for the “continued displacement of our people and the killings of civilians in southern and eastern parts of the country in Ethiopia Somali and Oromia regional states.” But, according to Boran, federal security forces have began telling the protesters to disperse and “have quickly started shooting at protesters.” He says he fears there could be more causalities among the many wounded who were rushed to Meki and Adama hospitals.

On the same day on Tuesday a massive anti-government protest took place in Welkite city, the administrative city of the Gurage Zone in southern regional state. Thousands came out to the streets protesting against the city administration’s failure to deliver a promised hospital. On October 3/ 2010, Ethiopia’s then Minister of health Dr. Tewodros Adhanom, laid a corner stone to launch the construction a 90 million birr hospital intended to provide service within 60 kilometers of radius of the town of Welkite. Eight years later, residents say the project has been diverted and the city remains without a hospital. These two incidents on Monday and Tuesday followed another killings by security forces in Weldiya, some 510 km north of the capital Addis Ababa, in Amhara regional state, on Saturday January 20.  Officials of the regional state said seven people, including one police officer, were killed; but activists and residents of the city who spoke to the media say the number is higher than seven. Among the victims were  Gebremeskel Getachew, who his brother described as having been killed “riddled with five bullets,” and Yosef Eshetu, a nine year old boy who was pictured riding on a pickup car along with others shortly before he was killed.

The killings in Weldiya have set in motion further protests in Kobo town, about 50 km north of Weldiya;  anti-government protests including the destruction of state owned and private properties were happening starting from Tuesday (some residents say it began already on Monday.) According to Yemiru Yifrashwa, a businessman who runs spare parts shop, the protests began peacefully on Tuesday when “thousands of the city’s residents took to the street to protest against the killings in Weldiya.” According to Yemiru, who spoke to Addis Standard by phone, the “harsh response from security forces triggered anger among many young people in the city.” He said there were arbitrary arrests on Tuesday and Wednesday nights “when members of the federal army began searching for young people by going door-to-door; they have detained many of the city’s young people and took them God knows where.” On Thursday, according to Yemiru,  “many people have come out to the streets in anger and started burning and destroying properties belonging to party affiliated companies.” So far, Yemiru said about “eight people are killed, three of them on Wednesday.”  However, Commander Amare Goshu, chief of the north Wello zone police department said only three people were killed and nine more were wounded in Kobo.And among the properties that have been damaged so far are Zeleke mechanized farm, which is one of the many businesses under Tiret Corporate, a conglomerate owned by the regional state. However, properties belonging to ethnic Tigray business were also targeted in the protest, as was reported by the VOA Amharic  after speaking to Gezay Gebreyesus, a Tigrayan businessman who left the town and who lived in the town for 21 years.

In a televised message through the Amhara region TV station, Gedu Andargachew, president of the region also admitted the death of civilians and property damages both in Weldiya and Kobo. The president blamed it on the regional state’s failure to deliver on its mandates, which led to “piles of grievances.” “This is ANDM’s problem,” he said referring to the party governing the region. “The result of this conflict is loss of lives, property damages and hindrance on civilians from pursuing a peaceful life.”  He promised that the party will work closely with religious leaders, elders and rank and file administrative members if the region to “restore peace.” AS 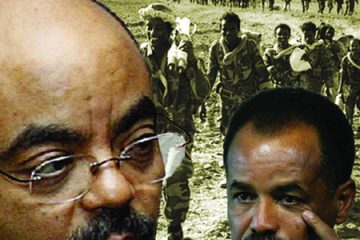