The Ethiopian federal arrangement along ethnic lines together with guarantees of self-determination including the right to secession is but a sign for further disarray than piecing together. And following the introduction of this ethnic federalism, keeping an even keel in Ethiopia’s inter-communal relations is becoming increasingly difficult. That appears why some writers lamented on learning to live with conflicts as a viable solution. However, there are matters that call for immediate attention, and if attended to would guarantee a better future, if not free from conflict, that entrench the art of tolerance, compromise and co-existence. Though reversing the ethnically molded regional groupings is unlikely, working on bridging the rift that has emerged as a divide among the various ethnic communities is doable and indispensable. No matter how the people ended up being bonded together, whether by sheer assimilationist and expansionist state policy or because of geopolitical proximity that destined them together, both in good and worst moments of military successes against external invasion or cyclic famines of biblical proportion, a common identity is in place. That identity is by no means a vice, rather a tremendous virtue that has to be nurtured without, at the same time, being disloyal to each other’s culture, language, religion, beliefs and many more value systems.

In what can be called the ‘consolidation’ stage of our federalism project, we are observing more pronounced claims for statehood, the oldest one being the quest for Sidama regional state, which seem to have reached a significant milestone. The Keffa, Wolayita and Gurage people demand for statehood are new ones that have emerged since the last few weeks. So far, all of these demands for statehood are coming from the Southern Nations, Nationalities and People’s Region (SNNPR). In a manner that is reminiscent of Nigeria’s past, Ethiopia too appears on course towards expanding the constituent units of its federation. Nigeria’s 12 states back in 1963 have expanded to 36 just within a period of three decades. If one has to look at it from purely administrative convenience point of view this must not appear too alarming, rather an opportunity to bring government closer to the governed, or at best addressing ethno-nationalist demands of the people claiming recognition to their distinct identities. Quoting David Hume, Matt Ridley describes the virtues of ‘fragmented government’ as follows: ‘Political fragmentation is often the friend, not the enemy, of economic advance, because of the stop it gives ‘both to power and authority.’’

The history of state craft in SNNPRS is evinces that moments of these type were envisaged, if not desired, at the time of drafting the 1994 Constitution. Back in the early stages of the drafting process and after the name was coined as SNNPRS, some 45 various ethnic groups were listed as footnote to Art 47(1)(7) which had triggered extensive debate first on whether or not to include such annexures at all and second due to various requests coming from groups aggrieved by their exclusion from the list. Stronger claims were made from the Siltie people, although many others also had expressed their grievances for not being included on the big list. Below is a quote of one member of the Assembly, Said Redwan Mehdi, which I had paraphrased in Amharic so that the meaning is not lost in translation:

Which roughly translates as: ‘From the times of our grandparents and parents, the people of Siltie had endured so much oppression and problems and its being regarded as minority is wrong considering the over 3 million population it has. He further explained that the people of Siltie reside both in Hadiya and Guragie Zones and deserve the full right of self-administration including the right to secede as enshrined under Art 39. And he brings the message from his constituency that asked the inclusion of Siltie as 46th in the list of those 45 referred to as members of the SNNPR.’ (Minutes of the Constitutional Assembly 3rd Series p.93)

Similar requests were made for instance by Qebena, Kistani and Seb’at Bet, which collectively meant to seek inclusion within the 45 groups already footnoted under Art 47(1)(7). Following an extensive deliberation, it was indicated in the minutes by Mulugeta Gebrehiwot, the Secretary of the Committee on the rights of Nations and Nationalities that a decision was made to drop the annexures in its entirety to avoid any present and future controversy on inclusion/exclusion and leave the decision for the region’s future Constitution and the institutions that it establishes to deal with similar issues as they emerge.

The merger of the groups into one single region was done with the belief that there were some commonalities that enable experimentation of togetherness with due emphasis on the prevailing distinctions. This form of unification, as indicated by the Chairman of the Committee on the rights of Nations and Nationalities, the late Dr Abdulmejid Hussein, is something not only to be encouraged but also expected in the future of Ethiopia so long as it is done willfully. When Sidama and Gurage Zones went ahead with their statehood requests, we should presume that the experiment has not succeeded and it should not come as a huge surprise or be regarded as opening the Pandora’s box for other founded or unfounded claims of statehood. With sobriety and caution, the government and the people should embrace the moment and better still, prepare for other claims that may come in similar fashion.

More could be better

Kenya, half of the size of Ethiopia, has 46 Provinces/Counties excluding Nairobi with 46 Governors/Commissioners and a central President. Prior to the recently adopted Constitution, it only had eight provinces and it was a decision made during an extended period of ‘constitutional moment’ that was culminated by the highly contested 2007 election that had led to widespread unrest in the East African country. This was made with a view, as mentioned earlier, to bring government closer to the governed. What makes Kenya’s approach different from that of Ethiopia is, however, the basis on which they had created the 46+Nairobi Counties. Implicit in Art 188 that frames the grounds for altering boundaries of Counties are the bases on which Counties are formed from the beginning, which are: ‘Population density and demographic trends; physical and human infrastructure; historical and cultural ties; the cost of administration; the views of the communities affected; the objects of devolution of government; and geographical features.’ This contrasts with Ethiopia’s Constitution Art 46 that declares ‘States shall be delimited on the basis of the settlement patterns, language, identity and consent of the peoples concerned.’ This has narrowly framed boundaries on the basis of group identity instead of the broader frame that combines administrative convenience with some level of cultural, economic and social ties.

The drawing of boundaries along ethnic lines remains to be the most contested political topic in Ethiopia’s federalism project. John Cohen described this predicament quoting Huntington back in 1994 where he wrote as follows: ‘drawing of regional boundaries on ethnic lines supplements what is unavoidable with what is undesirable…the combination of ethnic territorial units and ethnic parties’ cumulative cleavages can have a disastrous effect on national unity and political stability’ (Cohen, ‘Transition toward democracy and governance’ 1994, p 14). It is important to note that the federal set-up as a compact by which the constituent units strike a balance between their needs for coming together and that of maintaining their diversity would be undermined where regions are carved out in line with ethno-linguistic identities.

Group identities are important to the extent that they enable self-expression, serve as sources of pride and ease mutual exchange of ideas, commerce and more broadly facilitate economic relations. At the same time, where there are diverse identities and interests, there is always a desire to guard them with passion and no other alternative exists particularly in this era of identity politics than recognizing those diversities. It however comes with the risk of making governing a bit expensive, but not too expensive compared to the alternative, which is to try to hold it together by force and bear the costs of unabated instability as the suppressed responds to force by force.

That said, wishes for Ethiopian identity and ethno-nationalist identity can co-exist without being mutually exclusive only where tolerance for both views reigns. Only a Sidama whose nationalist demands have been respected may feel the Ethiopian identity as her/his own. No other path than this may keep Ethiopia as a ‘sane, united and democratic’ (and if we work harder, prosperous) nation. Governing from the center must, however, move away from politicizing and/or ethnicizing the bureaucracy, a role that should only be assumed by those carrying merit badges and not necessarily ethnic identities. In other words, equitable formula should be designed for resource sharing (particularly tax revenues) among member states and not for distribution of ministerial positions.

This requires depoliticizing ethnicity, for instance by outlawing establishment of political parties on ethnic lines. This is an idea that has for long been advocated by many and a path that is followed by other countries desirous of shifting from ethnicization of politics. EPRDF should, in this case, take a historic step and lead by example through the merger of its four ‘giants’. Though this appears a simplistic prescription and naivety of some sort, it remains to be a potent option to quickly shift away from ethnic politics and enable the central government strengthen those traits that hold the federation together. AS

Editor’s Note: Belachew Mekuria (PhD), was former commissioner of the Ethiopian Investment Commission. He can be reached at belachewmekuria@gmail.com

Ghana’s late president – A mixed legacy but a stable nation 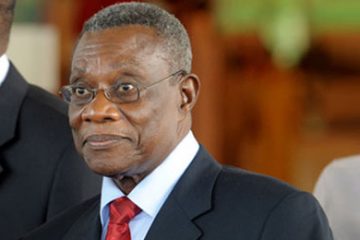