Tsion B.,  for Addis Standard


Addis Abeba, April 12/ 2018 – Six weeks after the resignation Prime Minister Hailemariam Desalegn, the ruling party, Ethiopian People’s Revolutionary Democratic Front’s (EPRDF), Council has elected its chairperson in what was is seen as a competitive and contentious election in the history of the party’s rule.

The protracted protest that rocked the country for sour years had negatively impacted the country’s political and economic landscape. According to reports from local and international sources, since 2015 over 1,000 people have been killed and tens of thousands detained. In 2017 only, more than one million people were internally displaced leading to serious humanitarian concerns. The country’s economy, touted as one of the fastest growing economy in the developing world, has also suffered a great deal amid widespread unrest, with skyrocketing  inflation as high as 15.6pc, dwindling export as well as a debilitating shortage of foreign currency forcing the government to devalue the Birr by 15%.

These protests, which were initially started by the Oromos, Ethiopia’s largest ethnic group, against a controversial city plan which sought  to expand Addis Abeba’s boundary into the surrounding Oromia Regional State, eventually spread to Amhara and part of the Southern Nations, Nationalities and Peoples Regional State(SNNP) with much more intensity and greater demand including regime change. This resulted in the declaration of two State of Emergencies in less than two years, which resukted in the death of dozens and brought thousands of people under arrest by authorities.

This unprecedented and persistent protest from the Oromo and Amhara ethnic groups – who together make up two-thirds of the population – compelled the ruling party to forfeit and pledge to undertake reforms to widen the political space and foster national consensus. It was as part of this reform that the then Prime Minster resigned from office.

After a lengthy deliberation, EPRDF has elected Dr. Abiy Ahmed, Chairman of the Oromo People’s Democratic Organization (OPDO), one of the front’s four members which represent the region that was the epicenter of the protest movement. Monday, April 2, 2018, marks the day the EPRDF dominated Ethiopian national parliament officially sworn in Dr. Abiy as the next Prime Minister of FDRE.

This has brought a lot of hope and optimism in the eyes and hearts of Ethiopians who are eager to see change, especially among the youth who were leading the protest. Dr. Abiy faces a high public expectation. So many people have already put forward a tall order of immediate task that he needs to execute once he assumes office – starting from lifting of the current controversial State of Emergency and the release of those arrested under it, to implementation of the reform agenda promised by the ruling party which includes widening the political space and fostering national consensus, but also reforming the security sector, easing ethnic tension, addressing the rampant corruption and soaring economic inequality as well as reforming repressive legislation such as the Anti-Terrorism and Societies and Charities laws .

In his maiden speech, Dr. Abiy has made a lot of promises including respecting and maintaining the rule of law, fighting corruption, improving the quality of education and restoring peace and stability in Ethiopia as well as the Horn of Africa, to name few. He also committed to create amicable space for opposition parties domicile in the country but also in exile. Revision of relevant policies and strategies is also another area Dr. Abiy indicated will be the priority of his new leadership.

This is indeed a historic moment for Ethiopians and a real chance for EPRDF to, through the new leadership, shift gears.  Broadly speaking, Abiy’s election may satisfy the persistent quest of the Oromo people for a political power and thereby ease the political tension in the country. But one would agree that his election – in and of itself – will not guarantee the much needed democratic reform. So the far-reaching question will be “will Dr. Abiy live up to the expectations of the people, be the mover and shaker and help the Ethiopian people see the light at the end of the tunnel or is he just a painkiller that will help EPRDF buy some more time to regroup and consolidate power?”

One can argue for both sides. The 42-year-old Dr. Abiy has the required expertise and experience for the position. He has good academic credentials and very good understanding of the country’s military and intelligence complex. He also has widespread support of the two most populous regions – Oromia and the Amhara – especially from the youth who have been active in the violent protests. Moreover, over the past few years, Dr. Abiy has demonstrated his reformist credential to the mass. Together with his OPDO colleagues, primarily Lemma Megerssa (the Regional President), he has been able to drive important reforms at the regional level and thereby position the party as a proponent of political and economic reforms. Banking on his strong popular base and support, Dr. Abiy could replicate some of these good practices from the region to the federal state. His landslide win against all odds is a testament that the power dynamic within the EPRDF has changed and that may potentially enable him to push forward the reform agenda required by Ethiopians.

However, it would be remiss of one not to think that Dr. Abiy is handed over power at a highly complex and uncertain time as he will have to deal with the existing divisions within the ruling coalition as well as discontent among the wider public at the same time. Bearing in mind the current political landscape and the party’s “group think” philosophy, he will undoubtedly face immense resistance from the party’s old guards, particularly Tigray People’s Liberation Front (TPLF) members that stand to gain from maintaining the status quo. He must, therefore, start the reform process by transforming the infamous “democratic centralism” philosophy – the deep entrenched organizational policy the party has employed for long to shackle and control party members by dictating policies and protecting the economic and political hegemony of certain groups. This is mainly because maintaining the present state of affairs will prolong the concentration of power in the hands of few and barricade the reform process.

Accomplishing this crucial task, however, will require Dr. Abiy to set up a team of capable, competitive and inclusive cabinet and advisors who will help him see through his reform vision. As some would fear, if he trades off key positions such as the military and security out of fear of destabilizing the status quo and angering the old guards, he can be paralyzed and relegated to play a “place holder” role like the previous Prime Minister. And this will jeopardize his leadership and brings back the long yearned quest of the people of Ethiopia back to square one.

True, some are justified to see his election with high suspicion; after all his position as prime minister is not the product of himself alone or even to the most part; it is the product of the existing political structure which is blamed for giving birth to the havoc the country is experiencing as of late,  not to mention that he was a part of the military and instrumental in establishing the infamous Information Network Security Agency (INSA) – a cyber-security agency that expanded mass surveillance of ordinary Ethiopians, including dissidents in Europe and North America.

But questions linger. Is being in possession of insiders knowledge about the inner workings of the old guard a blessing or a curse for PM Abiy? Will that make him be feared or respected? Will that help him become an equal partner in power negotiations to wrestle some of it back to the position he is holding today or will that make him become a rival to the establishment? The answers to these questions are what would determine on whether PM Abiy Ahmed is the antidote to cure Ethiopia’s chronic pain or just a painkiller. Only time will tell. AS

ED’s Note: Tsion B. is a political researcher/analyst based in Addis Abeba and can reached at ammelnew@gmail.com 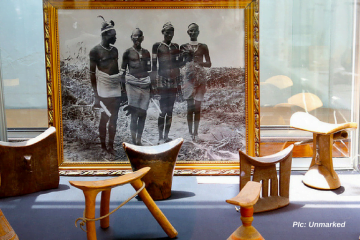