The current situation in Oromiya and wider Ethiopia is blusterous. In the words of an anonymous commentator on the ground, “Oromiya is a war zone; we are under effective military control.” From this characterization, I gather that the government security forces’ merciless firing of live ammunition at peaceful protestors has turned the situation into a popular civil rebellion in all of Oromiya. As a matter of fact, protest actions have taken place in more than 170 Oromo cities, towns and villages. As of this writing, Oromo activists have verified and documented the killing of over 100 Oromo persons, the majority of whom are students and farmers. The Associated Press reports that 80 Oromo protestors were killed. Oromo mothers and female students are being kidnapped and transported to unknown locations.

Effective December 15, the Oromo nation has fallen under the administrative jurisdiction of a “Command Post”, an entity chaired by the Prime Minister Hailemariam Desalegn. “Counter-Terrorism Task Force”, which is assembled for this particular purpose is also deployed. It remains a major legal question whether the “military administration” constitutes the same effect as declaration of emergency situation-executive decree which should have followed a procedure of its own as under article 93 of the constitution.

However, as of now, what we know is that the inception of the “command post” already has obliterated any semblance of legality because it unconstitutionally suspended the bodies that administer (i.e., the State Parliament and the Executive) of the State of Oromiya and the nominal political party in charge there.

On December 16, the federal government released something very close to a national decree. It was read on a national TV during prime time broadcast service. A joint venture of the “Command Post” and “Anti-Terrorism Special Task Force”, the decree’s content was considered by many as amounting to a declaration of war against the Oromo in general. The following day, the communication minister, Getachew Reda, followed up the decree with a presser, in which he described Oromo protesters as “devils”, “demons”, “satanic”, “witches” and “terrorists”, who need special military operation “to be put back in their place”. In his cantankerous statements, Getachew cleared up what many observers already suspected: the deep-seated and systematized dehumanization project of the Oromo by the regime and beyond. Again, PM Hailemariam Dessalegn, in an exclusive interview with the national TV, menacingly vowed for a “merciless” national response against the Oromo protesters if they don’t stop protesting. Now, we are observing synchronized, condescending and patronizing melodrama being translated into collective punishment against the Oromo. Getachew’s sordidly loaded press communication in fact reminded me of Seif-Al Islam Gaddafi’s last taunting moment in one of the notorious TV broadcast in which he called the Libyan protestors “rats” who had to be annihilated. The current military control in Oromiya exactly resembles the famous Nazi Law known as The Third Reich of 1933 that Nazified all German law in order to grant arbitrary power to Hitler to detain and convict Jews. In a similar way, ours is also a regime that has unequivocally and arrogantly displayed that it is not only the enemy of the people, but also of itself.

Why the plan is the reincarnation of perennial Oromo question?
The protest, now turned into an unarmed popular uprising or movement, is a renewed call from Oromo people to object to and demand the unconditional and permanent termination of the implementation of the Addis Abeba Master Plan, which is designed to incorporate surrounding Oromo lands into the capital against the will of owner-operators. The complete absence, on the part of the government, to solicit public consultation or participation since the start of the plan’s preparation in 2009 did not only make it a surreptitious political scheme, but also flagged major questions as to the substantive intent and content of the plan itself. In fact, the plan was viewed among the Oromo as an existential threat to the people and their land. The Oromo see the plan as a danger to their identity, language, culture, environment, and most importantly, their right to property/land security and the right to a sustainable development.
The government’s initial attempt to foist the plan in 2014 faced a stiff resistance from Ambo University students and all corners of Oromiya, triggering a massive crackdown by the government that killed unknown number of Oromo students in April and May of the same year. No judicial investigation or commission of inquiry was established, nor did anyone government official was hold accountable.

Completely disrespecting the peoples’ persistent objection against the plan, as of November 2015, the government came back with an imperious determination to implement the infamous master plan. At this juncture, the Oromo people, indisputably, were convinced of the federal government’s long-term scheme to end the meager economic and political presence, of the Oromo in central Addis Abeba and its surroundings.

The Master Plan, which the regional government said was scarped all together, is an epitome of the major political and economic injustices that have lingered on unresolved for far too long. Political subordination and denial of self-governance, rising poverty and increasing unemployment rate among Oromo households because of the policy of land eviction and language discrimination, are some of the fundamental questions. The ongoing movement is an expression of demand for an international scrutiny towards the Ethiopian regime’s system of wealth distribution and economic regulation in the ethnically structured federal system of the country.

Over the last quarter of century, the Oromo people have been ruthlessly targeted for their identity, falling prey to one of the authoritarian regimes in the continent. For example, various reports indicate that about 90% of the political prisoners in Ethiopian prison are exclusively made up of the Oromo. Not only did this create a deep-seated grievance among the Oromo, but also displayed the inept political leadership of the incumbent, potentially risking long-term stability of the region. The condensed account of political and economic discrimination based on identity, language and culture, the widespread and systematic violation of fundamental rights to property, crumbling land security, complete non-existence of freedom of assembly and of the press are some of the rudiments that are heating up the recent Oromo civil movement. These questions are as old as the coming into power of the current regime itself, or well beyond. The surreptitiously designed Addis Master Plan is the latest iteration of the long-standing policy of dispossessing the Oromo from their property, this time under the shibboleth of “urbanization” and “development.”

Humanitarian Crises: regime’s breach of common Article 3 of Geneva Convention
With the civilian protestors facing a regime that has no hesitation to use the national military force, a humanitarian crises has unfolded at an alarming rate. In some cases the government has deployed military helicopters to transport military personnel to the protest sites. We have witnessed that the regime’s military response doesn’t have moral boundary. I suspect the regime is oblivious to the fact that the whole world is watching.

Material breach-by the regime’s military force-of humanitarian obligation also continues to take place in several other forms. For example, in Wallaga, reports indicate that medical professionals are being beaten and arrested for treating wounded protesters. In Najjo town, Ambo and Burayu, security forces have occupied hospital compounds and other medical facilities in order to detain, deny and refuse admittance of the fatally injured protesters. In fact, the same type of cruelty has been witnessed during the 2014 Oromo protest. Of course, this kind of material breach of international humanitarian duty could also be considered as a constitutive element of war crimes and crimes against humanity.

Furthermore, the regime’s moral revulsion against the protestors is well indicated in the pervasive and horrifying acts of group rapes allegedly committed by members of the military  in a number of villages and university campuses. Some reports also reveal a disturbing account of a wife who was raped at night in front of her husband. It is clear that rape has always been used as a tool of committing crimes against humanity and war crimes in different countries at different times. That is why International Tribunal for Former Yugoslavia (ICTY) developed a legal theory under which an act of rape could give rise to a joint criminal conviction for crimes against humanity and war crimes.

Any viable solution?
The movement is an expressed demand for sustainable peace, justice, democracy, equality and true development that had been lacking in the country over the last 25 years. Apparently, the existing model of governance couldn’t extend to the greater public beyond the elites and a few members of a group who are affiliated with the regime. In fact, that is why Ethiopia is on the brink of famine with over 20 million Ethiopian people in need of urgent food, the majority of the affected being the Oromo. The number of Ethiopian youths that very frequently perish in the Mediterranean Sea while running away from home should put the lie to the government’s claim of the double digit growth. The stories thousands of our sisters living in an almost slavery-like situation in the Middle East should be a sufficient indication of how the travesty of the assertion Ethiopia’s fast economic growth.

The recent movement filled with ultimate self-sacrifice is the latest episode in Oromo’s quest for a better future and legitimate self-governance. The movement understands that unchecked state power in Ethiopia has been the problem and not the solution to economic development. The movement is an ultimate negation of the regime’s grandiloquent declaration of the recent 100% parliamentary win. It is the movement that is guarding and protecting the constitution from the government that was supposed to defend it. At the end of the day, the movement is a demand for reconfiguration and restructuring of the politics of the country. Of all, the movement is a plea for the permanent removal of the metastasized political cancer that that has diminished the lives and existence of the Oromo.

So, it is possible that the movement will soon culminate in being a sole driving force for the emergence of a new Ethiopia that all can call home. Oromo children’s blood gushing like a river on every street of Oromo city is a timely proof for a well-deserved moral leadership in the country. Over the last two months, the incumbent regime has conveyed a message to the Oromo and all other Ethiopians that it cannot lead the country; that its moral integrity is already corrupted, busted and politically bankrupt. The regime didn’t cash in on the benefit of the doubt it was granted 25 years ago. Now, it is a prime time for the people to step up their games by owning and showing the right leadership. That is the only way out.

Ed’s Note: Henok Gabisa is Visiting International Law Fellow based at Washington and Lee University School of Law in Lexington, Virginia. He can be reached at GabisaH@wlu.edu. The opinions expressed in this article are that of the writer and do not necessarily reflect Addis Standard’s editorial guideline. 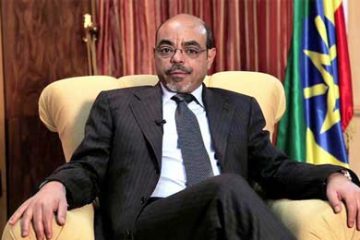