A quick look at the just ended Ethiopia’s local and city administrations election will discern, among others, two outstanding developments: a conspicuous absence of the major opposition parties, and the rather unimpressive election platforms espoused by the ruling Ethiopian Peoples’ Revolutionary Democratic Party (EPRDF) with the leading ones being “to bring the ongoing infrastructural construction projects to completion”, and ‘in order to materialize Meles’s vision’’.

With the absence of any seriously contending party, a “landslide victory” by   the ruling party will never come as a surprise no matter what its election platforms are. Nevertheless, a closer examination of these election platforms and other related political issues helps us gauge the level of maturity in the political-culture of the nation in general and the current political trends of the party in particular. And this is more so with EPRDF as a party that decidedly embarked on reconfiguring the political landscape of the country and took up the lion’s share in instituting the current hegemonic political and economic order.

To begin with, the elections campaign motto –‘to bring the ongoing infrastructural construction projects to completion’–is undoubtedly an issue which largely concerns administrative and bureaucratic matters. As a matter of fact, in fairly functional state during an event of election what is often presumed to leave its position is only the losing party. As such, the administrative and bureaucratic machineries of the state are in principle presumed to proceed with their ongoing administrative and project activities; unless, of course, it is the case with an authoritarian regime which systematically blends its party functionaries with bureaucratic apparatus of the state. Thus, the aforementioned election platform could barely stand as a fairly appealing cause for reasonably rational electorates.

For that matter, had the issue of ‘completion of projects’ been a valid cause, it would have been nearly impossible to see alteration of power from one party to another for it would easily lend itself as a mere excuse for the incumbent to cling to power for an ever-ending term.

With respect to the campaign motto –‘in order to materialize Meles’s vision’–one, first and foremost, needs to consider the questions: what does it really mean? Most importantly, why has it been picked up as election platform by the ruling party in the present election?

Many of us recall the late Prime Minister Meles Zenawi passionately expressing on several occasions his close affinity with his party, so much so that he would hardly distinguish his political or even personal life from that of the party he fashioned. Certainly, he was nowhere sighted championing his own personal idea and vision as distinct from the grand political and economic agenda of EPRDF. Thus, the notion of “Meles’s vision” is quite unclear to many whether it refers to all purportedly EPRDF’s policies and programs or Meles’s own personal vision.

Nevertheless, a more systematic look into the mantra of “Meles’s vision” will reveal that apparently it’s an ideological construction basically meant to serve as a stabilizing force to maintain the status quo and a rhetoric which emotionally appeals, given the relatively higher popularity of the late premier, to potential supporters as well as voters – sadly enough, now it appears to be rapidly evolving into some sort of “theocratic faith”.

As a matter of fact, in otherwise reasonably challenging election contest what contestant parties vying for power ought to offer to their potential electorates is not their “faith” in the leader’s vision, least a deceased one,  but rather a newly crafted and well-articulated rational idea that promises for the people fairly better living circumstances from their present conditions. To a degree, this signifies that current Ethiopian politics is inadvertently on the course of a downward spiral – quickly degenerating from reason to faith.

Thus, the relatively low-spirit evident around many of the poll stations may reflect either voters’ low appraisal of the election or their dissatisfaction with the current political situation in the country at large.

All said, one may rightly ask: is there any scientific wisdom to comprehend in general at times of such political stalemates quite evident in this election and beyond? In this regard, I found German’s historical sociologist Max Weber’s theory of ‘charismatic authority’ to be quite a useful perspective to look through and make sense of the situation.

Weber defines ‘charismatic authority’ as authority legitimized on the ground of followers’ devotion “to the exceptional sanctity, exemplary character, heroism, or special powers (for example the ability to work miracles) of leaders, as well as on the normative order sanctioned by him.” In an extreme case, followers may view the leader “as if endowed with supernatural, superhuman, or at least exceptional power or qualities that are not accessible to the ordinary persons.”  The recent strange phenomenon in Venezuela where its late president Hugo Chavez has been elevated supposedly to the “sacred” status of “Sainthood” along with a temple dedicated to worship him by his devout follower could be an illustrative instance of this thesis.

According to Weber, what sets charismatic authority apart from the democratic legal-rational authority is primarily the absence or poorly enforced universal formal laws, rules and regulations. In addition, in charismatic authority structure, there exists no clearly established hierarchical relationship between offices and administrative organs.  The staffs of charismatic authority are chosen primarily on their personal loyalty to the leader and thus lack the necessary qualification and competence – the very conditions which allowed the charismatic leader to freely intervene in the affairs of the organization.

What interested Weber in charismatic authority structure was the question of what would happen to it when the leader dies? He argues, a charismatic system is “inherently fragile” and it would seem to be able to survive only as long as the charismatic leader lives. Subsequently, the continuity of the organization is of “greatest consequences” to his followers because “if the organization ceases to exist, they are out of work.” Thus, the challenge for the followers is the creation of a situation in which “charisma in some adulterated form persists even after the leader’s death.”

One way to address this challenge is to search out a new charismatic leader which is unlikely to get one with the same aura as his predecessors. From his vast historical data Weber concludes that a situation like this would often put charismatic organizations on the cross-road: either descend to an archaic dynastic rule or courageously embrace the modern democratic system which strictly upholds the supremacy of the rule of law.

But, it should be noted that whereas Weber’s prediction was for a socio-political system that prevailed almost a century ago, in the socio-political context of the present-world there appears to be many possible political pathways following the end of a charismatic authoritarian rule. The basic ones being: a “truly democratic multi-party system”, “autocratic factional regime”, “semblance of dynastic rule”, “rule by a military junta” or in the worst case scenario an utterly “failed-state”.

In the Ethiopian case, all the political moves of the government after the death of Prime Minister Meles somewhat bear a mark of transition from “visible-hand” politics operated mainly by well-recognized charismatic leader to an “invisible-hand” politics probably operated by some fairly obscure political actors off the stage as evidenced in the recent extra-constitutional appointment of three vice-Prime Ministers. Even then, what has changed is simply the playing-field on which the same familiar political-game is being played. Thus, the current political state in Ethiopia indicates a return towards autocratic factional regime which in the first place had produced the charismatic authoritarian regime.

Taye Negussie (PhD) is an Assistant Professor of Sociology at Addis Ababa University. He can be reached at: tayesosa@yahoo.com 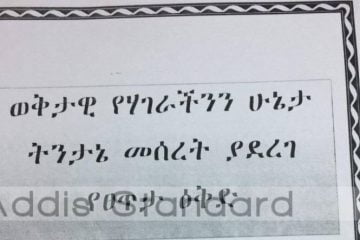