The migrants were found in areas between the districts of Mocha and Dubab, according to Anees Al-Shamiri, the manager of the security office in Mocha district. He said the group, 27 of whom were women, have been transferred to Taiz Central Prison pending deportation.

On March 10 a task force from the 35th Armored Brigade detained 53 Ethiopian nationals in the governorate. They are also currently being held in Taiz Central Prison.

According to the prison’s director, Colonel Mohammed Naef, there are now 224 immigrants being held in the prison.

New arrivals are screened by the UN Refugee Agency (UNHCR) and its partners when being incarcerated. “Asylum seekers are identified and released by the authorities in the spirit of Yemen’s international obligations to refugees and asylum seekers,” explained Mogib Abdullah, senior communications and public information assistant for the UNHCR.

Abdullah added that the 59 Ethiopians detained on Monday have already been identified by the agency as economic migrants. He said his agency does not coordinate or involve itself in any way with the return of migrants who do not fall under its mandate.

Pending confirmation from the Taiz Security Administration and the Immigration, Passport and Naturalization Authority (IPNA) in Sana’a, Naef expects the new arrivals to be deported within a month.

However, the likelihood they will be deported within this time frame is uncertain, as only 60 percent of illegal immigrants detained in 2014 have been deported, according to a source within the IPNA.

An estimated 91,592 immigrants arrived on Yemen’s coastlines in 2014. Two hundred and forty-six people died making the journey last year, more than the previous four years combined, according to the UNHCR. 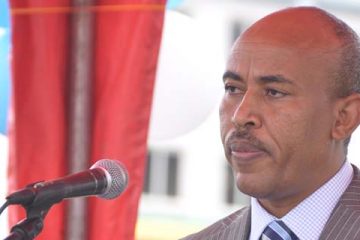