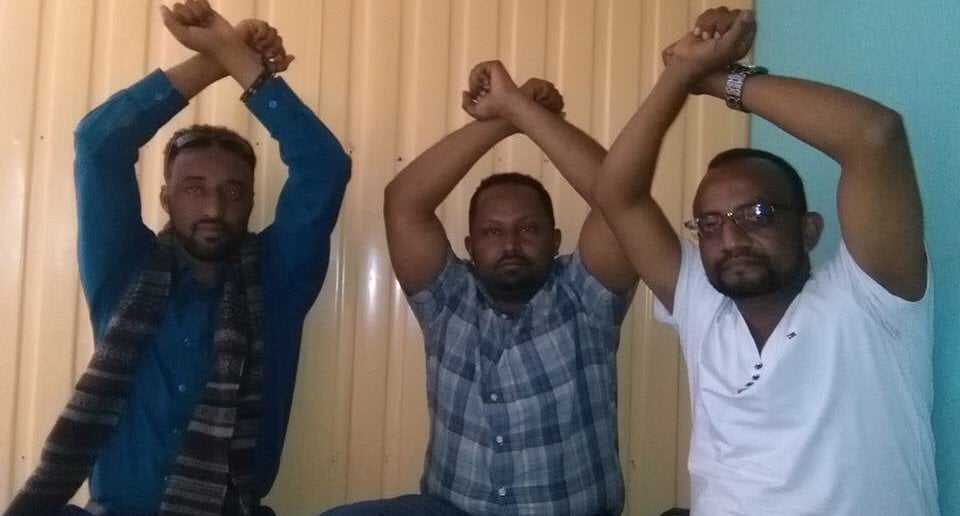 Addis Abeba, Feb. 02/2017 – Deprived of their day in a court of law, journalists Elias Gebru and Anania Sori have written a letter to the UN’s chief, António Guterres (wrongly mentioned by his predecessor’s name Ban Ki –moon) and the international community detailing their ordeals since they were placed under police custody following Ethiopia’s declaration of the current state of Emergency.

Rattled by yearlong widespread public protests, the ruling party in Ethiopia, EPRDF, declared a six-month state of emergency on Oct. 08, 2016. Since then, according to the government’s own account, more than 27,000 Ethiopians were detained in several military camps throughout the country. Of these, some 9,800 were released on Dec. 21, 2016. A further 11, 000 are expected to be released today, according to the state-affiliated media, FanaBC.

The government insists that the detainees, who it said have participated in recent protests, are undergoing a necessary training in “Ethiopia’s constitution, constitutional order, national development agendas” among others.  The first round “graduates” were seen wearing a white t-shirt with a text “Never Again.” However, accounts by detainees who are released tell of disturbing rights violations including torture. Detainees include opposition party members, university students, activists, and civil servants.

However, unlike the other detainees, journalists Elias Gebru and Anania Sori were neither admitted to these camps nor were they taken to a court of law to face trials. They are at a prison ward in the capital Addis Abeba, often deprived of “family visits, books and newspapers, and proper sanitation,” the letter said. They also said that although they have been accused of attempting to undermine the constitution and corresponding with Patriotic G7 and the Oromo Liberation Front (OLF), two political parties branded as “terrorist organizations” by Ethiopia’s ruling party-controlled parliament, no formal charges were brought against them.

“Our rights were violated on the day we were detained; and in the two prisons that we have been kept since then, our rights are violated including being kept separately in a dark room for three days during which we were deprived of meeting with our family members” they wrote, “we are kept with more than 50 inmates, including with mentally ill prisoners, in a small room.”

Journalist Elias Gebru was the editor of a now defunct Amharic weekly “Addis Gets”, where Anania was writing as a columnist. But both are also known for their social media activism. They were arrested on Nov. 18, 2016, along with Daniel Shibeshi, former opposition party leader who has been in and out of prison himself.

The three were detained shortly after they have posted on social media their picture (See story picture), with crossed arms above their head, made famous as a symbol of the yearlong protest in Oromia regional state, which was followed nine months later in Amhara regional state, the largest and second largest regional states according to Ethiopia’s federal arrangement.

A sign of the regime’s deepening insecurity, a section in the decree of the state of emergency details displaying the gesture as a criminal act.

Elias and Anania have further said that in their duty as journalists while working at the magazine, which once featured a long interview with Ethiopia’s ex-communication minister Getachew Reda, they have kept their professional integrity and impartiality. They expressed their concerns at the deteriorating press freedom as well as pervasive corruption in Ethiopia.  AS