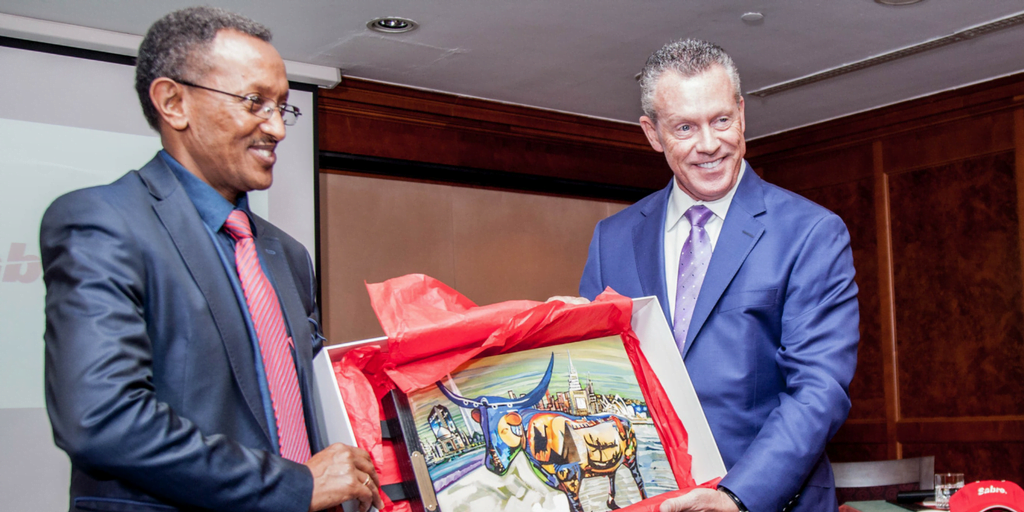 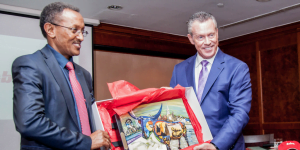 Addis Abeba, August 31/2017 – Ethiopian Airlines and Sabre Corporation, an airline technology solution company, have signed the third renewal of a previous agreement for additional seven years, senior executives from both companies announced on Wednesday 30 August at a press event held at the Sheraton Addis.

Sabre has been working with Ethiopian by providing technology solutions after the two had signed their first agreement in 2005. “We do a number of things but the core items are customer reservation system and solutions on network planning and scheduling,” Dino Gelmetti, Vice President, Sabre EMEA, told Addis Standard when asked his company’s roles were.

Esayas Woldemariam, MD, Ethiopian Airlines International Services, on his part told a group of journalists that the national carrier has been the biggest customer of Sabre in Africa and the inking of the latest agreement is seen as a “vote of confidence” for Sabre. Dino Gelmetti told Addis Standard that they also have other main customers in Africa, among others, Kulula, South African Airlines, Kenyan Airways, Air Mauritius, Royal Air Maruc and Egyptair.

Both did not want to disclose the amount of money involved in the agreement, with Dino Gelmetti telling Addis Standard it was “confidential” between the two parties. “I’m not [going] to disclose any information.”

Esayas said that Ethiopian has so far invested more than US$30 million in different technology facilities. According to him, the national carrier is very keen in acquiring new technologies including a mobile application service it will soon implement to enable its passengers to easily buy tickets and check-in from their mobile phones.

The International Air Transport Association, IATA, is planning to have airlines around the globe to develop their own mobile application services by the end of 2018. Esayas hopes Ethiopian will start the service sooner than 2018.

In another news, Ethiopian Airlines is inching closer to taking over the management of the troubled Nigerian private Airlines, Arik Air. According to Esayas, Ethiopian was requested to takeover Arik Air by the Nigerian government, which took over Arik Air’s management in February this year after the private airline experienced a near collapse. The Nigerian government agency, Asset Management Corporation of Nigeria, said at the time that it took the decision to “instill sanity in the country’s aviation sector and to prevent a major catastrophe.”

“Arik Air was a private airline but after it went bankrupt, the [Nigerian] government took over the company considering the unpaid government loans. The Nigerian Aviation Ministry then requested Ethiopian if we were willing to manage it. We then submitted our terms and conditions. We are now waiting for their response,” Esayas told journalists, adding Ethiopian is capable and desires to “conduct that business.”

Industry analysts say the takeover will provide Ethiopian with a strong foothold in the industry’s market in West Africa and beyond. According to a research conducted by Sabre Corp., 60 – 70% of travelers from the US and the UK prefer flying with an African airline to travel to the continent, but today 80% of the flights in Africa are operated by international carriers.

Regarding industry profits, the research indicates that all African airlines combined have made a profit of US$100 million in 2016, which is the lowest share from the global market; but only Ethiopian “makes a significant profit” among all of them.

Currently Ethiopian is flying to more than 90 destinations worldwide, with 55 of them in Africa, which puts the national carrier on top of all other airlines in the world to operate at large number of flights within the continent. AS