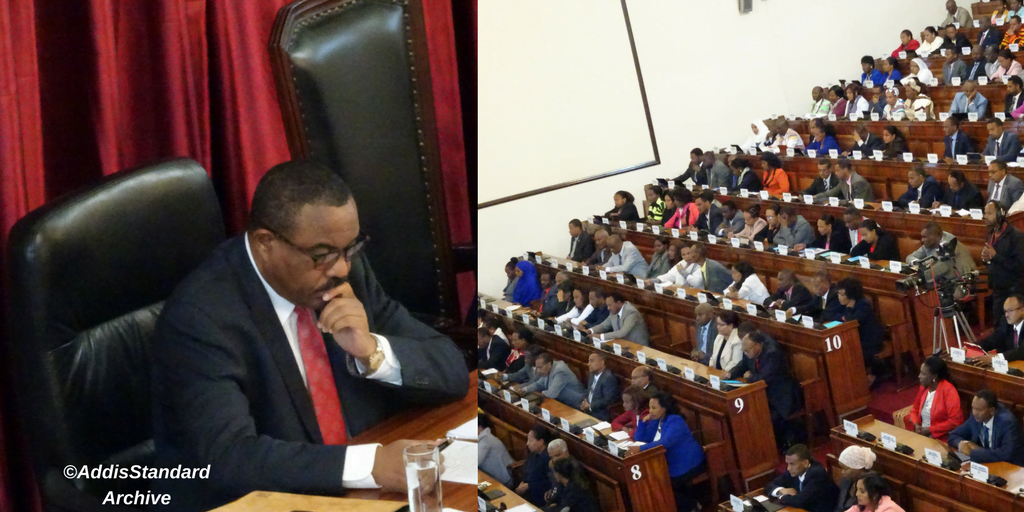 Addis Abeba, December 26/2017 – Ethiopia’s Prime Minister Hailemariam Desalegn has put the ongoing executive committee meeting  of the ruling party EPRDF on hold and appeared in the parliament yesterday. The Prime Minister’s unusual appearance follows the request from the law makers who boycotted the parliament until he has done so. 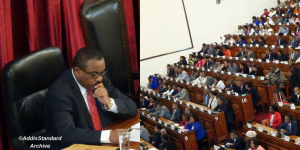 PM Haimeariam’s during his appearance in the parliament on Oct. 26

Last week, the members of the parliament, which is entirely controlled by the ruling EPRDF, have said they would like to have the Prime Minister appear in the chamber to answer to their questions regarding the recent violent incidents which left the country in the brink of a major security crisis.   The requests were advanced mostly by members of the parliament representing the two parties within the EPRDF: the OPDO and the ANDM, governing Oromia, the largest, and Amhara, the second largest, regional states in the current federal dispensation. It follows recent political developments in which the leadership in the two regional states are showing signs of alliance against what is widely accepted as dominance by the TPLF.

However, neither the members of the parliament nor the prime minister’s office, nor for that matter the government’s communication affairs office have said a word about the actual content of the discussions, which lasted for more than three hours, according to sources.

The silence following the meeting has prompted frustrations among many, including supporters of the OPDO. “How is the public going to know about the meeting? Through the members of Parliament or through other means? Or are we not going to hear anything about it? Isn’t asking questions in public and getting the answers through the back door a disrespect to the public?” asked Dereje Gerefa Tulu, one of the leading supporters of the OPDO, in his Facebook post.

Addis Standard’s attempts to get information from few members of parliamentarian were to no avail.

PM Hailemariam’s last appearance in the parliament was on Oct. 26 during which he admitted that “black market in forex” and “contraband” as well as “Khat trading” in eastern Ethiopia have fueled the continued violence that displaced hundreds of thousands of civilians, giving the conflict ethnic and national dimensions. But he defended the federal army and the Somali region’s controversial “Liyu Police” force in the conflict with the exception of few “rogue members implicated in the violence”.  Since then, however,  members of the federal army have committed another crime against civilians in Chelenko, east Hararghe zone of the Oromia regional state.

In an unexpected address to the nation following the killings in Chelenko and yet another one in Hawi Gudina woreda of west Hararghe Zone, in which dozens of Ethiopian Somalis were killed, Prime Minister Hailemariam gave a rare televised message and  expressed his condolences to the families of the victims. But in what can only be seen as code red, the Prime Minister also said these latest incidents were posing serious danger to the peace and stability of the country. The MPs request came to the attention of the media after the PM’s unexpected appearance in the national television. AS