In conflict prone contexts, foreign investors, especially whose actions while entering a given country were not subject to checks and balances, may undermine political stability and fuel social unrest.Depending on the level of accountability in the recipient country, foreign direct investment (FDI) could be a blessing or a curse.

In this piece, I will attempt to highlight Ethiopia’s political economy and the setting for the operations of foreign investors.

Notwithstanding the announcement of a 100% electoral victory by the ruling EPRDF, the fact remains that Ethiopia has never had a fully representative government. This rather unique situation means it is naïve to discuss Ethiopia’s current affairs by applying standard rhetoric.Doing so fails to capture the peculiarity of the situation on the ground. For instance, familiar phrases such as“dictatorial regime” or “totalitarian government” do not fully capture the essence of the current political system in Ethiopia.

The key to understand the strange nature of the ERPDF government, a coalition of four parties, is to recognize it as a system of “internal colonial rule” led by one powerful party, the Tigrean People’s Liberation Front (TPLF).It is a conspicuous knowledge held by many that EPRDF essentially means TPLF.

The loyalty towards TPLF of Ethiopia’s military and security apparatus has remained the only source of EPRDF’s strength and tight grip on power. Without further ado it is suffice to mention that the country’s army generals and high ranking officers hail from Tigray, the geographic location home to TPLF. In turn the army’s brutal efficiency in military and security command system has earned the TPLF an extraordinary reputation and near complete political upper hand in the eyes of the other three parties within the coalition.

Technically that leaves Ethiopia with a reverse political system: the world is familiar with majority-rule and minority-rights, Ethiopia’s, on the other hand,is a political system without even some majority-rights. Today’s TPLF dominated EPRDF needed to be certain that the majority would not have the bare minimum of rights, because, if allowed, this might eventually lead to the emergence of democracy.

The political and military power disparity favoring a single party has also caused divergences in economic and domestic private investment opportunities. This resulted in the emergence of domestic crony capitalism of the ugliest type. Endowment Fund for Rehabilitation of Tigray (EFFORT), the acronym that has more than 50 companies under its control, owns its presence and dominance to the growing trend of domestic crony capitalism.

In the last 25 years EFFORT has emerged as the most powerful domestic business conglomerate controlling the commanding heights of the Ethiopian economy. Its monopoly on the Ethiopian economy ranges from heavy engineering, construction, import and exports (of key capital and raw materials including fertilizers on which all Ethiopian farmers rely) to freight and passenger transport, wholesale and retail distributions. And yet, there is little information about EFFORT that is available for the general public.

It is a misnomer to describe EFFORT as a business group “affiliated to the government”. But Ethiopians know that the same groups of people who occupy government positions are also owners of the companies under EFFORT.

And as of late another unlikely business monopoly has emerged in the form of the military establishment, the same military whose top leadership is either loyal to or under the indirect control of TPLF. METeC, a company run by the national army, is having an elaborate business interest from production of computers and flat screen TVs to heavy metals, car assembly and hotels. Once again, there is no or little information available to the public on the exact nature of METeC’s business empire.

It is within this political reality that one needs to look into the economic aspects, including the manner by which the EPRDF led government is regulating the flow of FDI. It is a public knowledge that cronyism has, by and large, emerged as the trade mark of EPRDF’s economic governance over the past two decades, including its deals with foreign companies operating in the country.

As of this writing, news is coming that protesters in Guji zone of southern Ethiopia and Dembi Delo of western Ethiopia are targeting the two gold mines in the area owned by the MIDROC Ethiopia Investment Group. To understand this boiling public frustration, it is important to acknowledge that the people of Ethiopia have no knowledge about how these two gold mines were sold to MEDROC in the first place, and to evaluate whether the people in the areas where the natural resources are being ferociously extracted have stood to benefit from it in any way. It is also important to know that the name MIDROC stands for Mohammed International Development Research and Organization Companies, a name that implies nothing about the nature of the vast business functioning under its umbrella. For Many Ethiopians, therefore,MIDROC is the dark horse that appeared on the scene from nowhere but spread itself in all sectors of the Ethiopian economy at alarming pace.

For much of the first decade under EPRDF’s rule, Ethiopia suffered a serious setback in attracting foreign investment. Foreign investors were cautious (rightly), observing the unhealthy governance system as a risk not worth taking. However, during those days, MIDROC Ethiopia was often presented as a cover up to entice other foreign investors, giving the impression that the EPRDF regime was trustworthy and foreign investment was safe to flow in. That, and its sworn allegiance to the ruling party in power, gave MIDROC the opportunity to enjoy unparalleled access to Ethiopia’s natural resources. This was done primarily because the EPRDF could count on MIDROC as a foreign investor. The United Nations Conference on Trade and Development once reported that about 60 per cent of the overall foreign direct investment approved in Ethiopia was related to MIDROC.

MEDROC’s expansions began with acquisitions of many previous public enterprises – manufacturing branches, state farms, gold mines, and other mineral resources mostly outside of public scrutiny. MIDROC is most commonly associated with land grabs in many parts of Oromiya, at the heart of Addis Abeba and Gambella, causing havocs through evictions of millions of households from their ancestral lands.

The other murky deals

The contradictions in Ethiopia’s business environment are rather perplexing. On the one hand the TPLF dominated regime in Addis Abeba has a very hostile attitude to private domestic investors. Ethiopia has remained at the bottom of World Bank’s country ranks in ease of doing business, ranking 146th out of 189 countries in 2015. But EFFORT, METeC and MDROC business empires and their affiliates are exempt from such restrictions and the little private businesses in the country have to survive the three to make a meaningful economic gain.

On the other hand Ethiopia is known for making extraordinary concessions to attract foreign investors, particularly during the last decade. Here is the question – why such officious treatmentfor foreign investors when private business are forced to eat dirt? The answer lies in the assumption that the government often acts in the interest of domestic cronies – foreign investors are needed to camouflage EFFORT’s aggressive expansions. The deals to couple EFFORT with foreign businesses are surrounded by dark secrets; details are unavailable to the general public. Foreign investors have often been lured into joint ventures with party owned or affiliated local companies. The recent US$30 million worth deal between a local pharmaceutical company owned by EFFORT and a foreign company symbolizes that assertion. The overlap between the operations of domestic oligopolistic companies and their foreign counterparts is so much that it is difficult to know where one ends and the other begins.

The recent fall out between the government in Ethiopia and the Karuturi Global Ltd has revealed the murky nature of foreign investment deals in Ethiopia that prompted many to summarize “in Ethiopia, foreign investment is a fancy word for stealing land”. In 2010, Karuturi Global Ltd was given a concession to develop 300, 000 hectares of agricultural land in Gambella. However, in Dec. 2015, the deal collapsed when the Agricultural Ministry’s land investment agency “cancelled the concession on the grounds that by 2012 Karuturi had developed only 1,200 hectares of land within the initial two year period of the contract.” There is a lot more into this fall out than meet the eye, least the fate of the hundreds of thousands of indigenous people who were forced to give up their lands to give way to a deal they know nothing about.

But one of the most unsettling details to emerge out of this fiasco was the claim by Karuturi Global Ltd management that the land was forced upon them by the local authorities despite their insistence otherwise. At first glance this may sound awkward, as if the foreign investor and the Ethiopian authorities switched sides in the process of bargaining. However, for someone who is familiar with the shrewd operations of doing business in Ethiopia it is easy to know why Ethiopian officials were forcing the foreign investor to take 30 times more than it said it could handle. One plausible explanation held by many is that since enough land grabbing had already been done by the cronies during the previous decades, authorities found it prudent to frame a foreign investor as a vehicle to continue land expropriation.

In the wake of a possible persistence of protests by Ethiopians, protesters’ targeted attacks against foreign companies operating in Ethiopia may come as sheer anarchic for outsiders. But as long as the people of Ethiopia are kept in the dark as to the nature of the real deals between foreign companies and a government flawed by asymmetrical party coalition (deals that symbolize a life deprived of its means and style),incidents of targeted public outrage against selected foreign companies should not come as a shock.

The same explanation holds true for the land expropriations for flower farms and industrial parks in Oromiya, particularly in the vicinity of Addis Abeba. It is for such reasons that the infamous Addis Abeba Master Plan was formulated, eyeing 20 times more land that would be transformed into wasteful industrial parks all in the name of attracting foreign investment the nature of it is kept secret from the very people it greatly affects.

ED’s Note: J. Bonsa is an economist by training. He can be reached at dinade0612@gmail.com. The opinions expressed in this article are that of the author and do not necessarily reflect the editorial principles of Addis Standard. 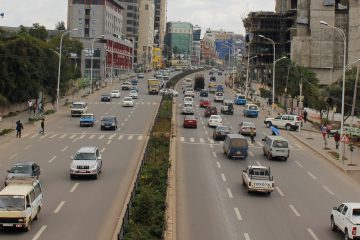