Addis Abeba, January 30/2018 – As of late, it doesn’t take to be a doomsayer to see (and say) that the politics in Ethiopia is at a brink of an unprecedented crisis that keep dragging its people to violence and chaos. Mentioning a few recent examples will suffice to show how miserably the federal government has failed to ensure the safety and security of Ethiopians. It is not able to protect when, for example, a military violence has recently displaced one million people from the Somali Regional State. In the process, in what many of the victims say was a crime perpetrated by members of the Somali Region Special Police –a para military force usually referred to as ‘Liyu Police’ – hundreds of civilians, including pregnant women and children as young as 3 months, were killed. The Federal Defense Forces are accused of failing to protect civilians under the pretext of not interfering in regional matters. Ironically however, that did not hinder them from pulling their triggers in recent weeks and days, killing civilian protesters and non-protesters from Ambo to Chelenko, Shashemene, Hamaresa, Moyale, and as of last week, Weldiya and Kobo, among other places. As always, the federal government did little to investigate and prosecute security forces responsible for these killings.

The dominant elites controlling Ethiopia’s ruling party, EPRDF, do not appear to appreciate the perilous turn this situation is taking the country to. Despite repeated promises of reform, so far no significant measure has materialized.

In the absence of that genuine commitment for reform among the political elites, it may still be relevant to look at the constitutionally mandated institutions – mainly the House of Peoples’ Representatives (HPR) – as the last and desperate resort to stop army orchestrated killings and to prevent the country from falling in to the imminent abyss .

Yes, it is regrettable that save for one so-called independent MP, all the 547 seats in the parliament is controlled by MPs from EPRDF’s four coalition parties constituting the center and their five sister parties from the peripheries; yes, instead of exercising their constitutional powers, our parliamentarians have been nothing but a collective voice of 547 yes men and women; and yes, the endless excuse that paralyzed the people’s voice within the parliament is the extension of  ‘democratic centralism’, EPRDF’s political dogma that has effectively reduced the role of the HPR to nothing but a rubber-stamp of the powerful group within EPRDF – a group which has been steering the country toward crisis for years.

But against all odds in this 100 per cent ruling party controlled Parliament, something unusual has been happening as of the end of the last summer recess in Oct. 2017. As a reflection of the inter-party crisis that gripped the EPRDF as a coalition, including the sudden resignation of the speaker of the house, Aba Dulla Gemeda, who later on rescinded his resignation, members of the parliament – especially the ones from the Oromia and Amhara regional states – hence sheer majority – are showing sings of resistance – a resistance that included demanding the Prime Minister to appear before them and explain the Somali-Oromia violence; a resistance that manifested itself through boycotting parliamentary sessions, something that was never seen before.

While some Ethiopians hailed the MPs for this unprecedented bravado, others have seen enough timidity in it – not without a reason. For starters, Ethiopian MPs are known for brandishing the prefix ‘honorable’ without the proper use of the privileges and responsibilities that come with it, not to mention that it is the same parliament that presided over last year’s ten month state of emergency declared by the council of ministers. The parliament’s spectacular failure to invoke the constitution to safeguard the safety and security of Ethiopians, as the army went on a wanton abuse of rights through the state of emergency, is a recent scare left in every beating heart of the people of Ethiopia.

Be that as it may, if the recent somehow promising wind of change within the parliament is anything to go by, it may not be far fetched to look at and hope for the current parliamentarians to invoke at least some of their own constitutional power in order to immediately contain the most pressing crisis the country is facing today, i.e, the excesses of members of the federal armed forces that are roaming cities, towns and villages and killing innocent civilians.

To do that, they only need a reminder on the political significance of the seats they are occupying. They are members of a Federal Parliament, which signifies the supremacy of the people of Ethiopia. The parliament should ideally be the overseer of the executive, not the other way round. Strike is a tool employees use to leverage on their employer. Like the event few weeks ago, MPs should not only beg for a briefing from the executive – including the prime minister; they should order.

So far, shackled by party loyalty, MPs have been refraining from exercising their constitutional powers the current state of affairs dictate. It is time that our MPs knew they would share the blame if the situation spirals out of control due to their own failure to intervene. That is why we should all pressure our MPs to make use of the Constitution, especially paragraphs 55(7) (17) (18) and 60. The HPR has the power ensure the accountability of the national defense, police, and security in case their actions violate human rights, which it is. In extreme circumstances, the parties constituting the EPRDF and controlling all the seats in the HPR can form a new coalition government. If the MPs embrace the well-being of the people and the country, now is not the time to capitulate to an archaic dogma that enfeebled the formal democratic institutions to justify authoritarianism. It is time to use all the peaceful and legal means available to contain the excesses of the armed forces since the alternative is a fast approaching full-blown crisis. AS

Opinion: Demystifying the bold-move by the Oromia Regional State leadership vis a vis Ethiopia's quest for a better tomorrow 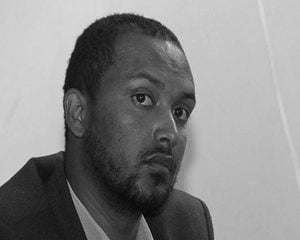