Addis Abeba Dec. 19/2016 – On Saturday Dec. 17, Siraj Fegessa, Ethiopia’s minister of defense and the secretariat of the command post tasked to implement the country’s sweeping six-month state of emergency (SOE), had news that should have come as a relief to tens of thousands of Ethiopians.  Minister Siraj, a civilian, told journalists mostly drawn from state-controlled and state-affiliated media houses that some 9, 800 individuals who were detained under the SoE will be released by Wednesday Dec. 21 while 2, 449 others “will be brought to justice.”

But the mood among Ethiopians following the announcement is not that of a celebration; for many, the damage their loved ones have sustained while held at one of the half dozen detention facilities (referred to by many as ‘concentration camps’) is too deep to have been undone by the announcement of their release, and rightly so.

By the government’s account, a total of 24,799 individuals were arrested in two rounds under the SoE since October this year. However, this figure doesn’t mention whether those who were detained prior to the decreeing of the SoE on October 9 are accounted for. And, informed by previous brutalities of the security apparatus, Ethiopians are under no illusion that this figure is much higher than what’s being admitted by the government.

Even one is to take the government’s figures to account, it simply means that thousands of university students have missed this academic year’s attendance; thousands others who were the breadwinners of their families and extended family members have failed to deliver on their promises; and thousands have lost their jobs.

But for some, the cost is too personal to recover from. One such Ethiopian is Alemayehu Merga, (name changed upon request), a former clerk at a private Bank in Awash town some 91 km south east of the capital Addis Abeba.

In a letter sent to Addis Standard a few weeks ago, Alemayehu says when he was arrested from his hotel room (name of the hotel withheld) in Merkato, an open market hailed as the largest in Africa, he was preparing for his wedding scheduled to take place on Sunday September 16 in Adama, 100k south east of Addis Abeba.

The intense crackdown by the police that led to Alemayehu’s arrest followed a massive anti-government protest on August 06, 2016. The weekend protest was called by online activists of the #OromoProtest and was dubbed “Grand Oromo Rally”.  It ended when regional and federal police have brutally suppressed the protesters, killing hundreds and detaining thousands. But instead of receding, thousands more of protesters raged through the Special Zone of the Oromia Regional State, eight neighboring towns mostly located within 25k radius from the capital Addis Abeba.

The protests in these two regional states have quickly escalated into a large scale anti-government protest that posed the ultimate challenge to the hitherto unchallenged quarter century reign of the ruling TPLF-dominated EPRDF regime in Ethiopia.

Almayehu’s arrest happened at a time when, reeling from uncontrollable protest flare ups in most parts of the country, the federal and city police began conducting random stop and search and have arrested unknown numbers of individuals from the city. Low-cost hotels throughout Addis Abeba have also received letters from their respective Kebele administrations ordering them to declare the identities of their guests who come from the countryside.

“I came to Addis Abeba from Awash to buy some household materials and pick my wedding suit which was ready at a tailor’s shop in Piassa. But I was arrested on September 10,” his letter narrates.

Alemayehu was then held at a police station commonly known in Addis Abeba as “Sidistegna” Police station located in the heart of the city. He was kept there incommunicado for about a month. No one from his family knew what happened to him. And he missed his wedding.

“I kept telling the police officers that I was only in town to prepare for my wedding, but they kept telling me I was in town to organize young people to protest. I had a few invitation cards that I was planning to give out to my friends and relatives living in the city. I never managed to give them as I was arrested the very next day after I arrived in the city. And even if I kept showing my wedding invitation cards to the police officers, no one wanted to believe me.”

Alemayehu joined hundreds of others detained under similar circumstances. Most of them are young Ethiopians and all of them were held incommunicado at several police stations in the city.

On October 02, the unthinkable happened when police fired shots at a gathering of millions of Oromo who came to celebrate the annual Ireechaa festival in Bishoftu town, 40 km south of the capital.

For many, the death by stamped of yet unverified numbers of Ethiopians at this sacred, otherwise peaceful festival was the turning point of the almost year-long anti-government protests that gripped the nation. A ‘five-day rage’ was called by online activists of the Oromo protests following what was quickly hashtaged as “IreechaaMassacre. It resulted in protesters attacking foreign owned businesses in several parts of the country. It also led to the near collapse of the country’s tourism industry, forced the government to declare the current SoE and to reshuffle the Prime Minister’s cabinet only a year after it was sworn in to the office.

But for Alemayehu and thousands of others detained pre and post the SoE, the ordeal has just began.

Three days after the decreeing on Oct. 9 of the sweeping SoE, which practically suspended most parts of the constitution, Alemayehu and “roughly 2000 others” held in police stations in Addis Abeba were transported to Awash Abra Military camp, not far away from Alemayehu’s birth place in Awash.

The military camp is one of the dozen camps throughout the country where tens of thousands of Ethiopians detained under the SoE are currently held.

The 2013 country report by the US Bureau of Democracy, Human Rights, and Labor describes these camps as “unofficial detention centers throughout the country, including in Dedessa, Bir Sheleko, Tolay, Hormat, Blate, Tatek, Jijiga, Holeta, and Senkele. Most were located at military camps.”

“None of my family members, including my bride-to-be, knew I was there,” Alemayehu’s 3-pages letter recounts. All of them were told they were arrested by the “orders of the command post”, after they were transported to the camp. By now, the government announced that the command post was led by defense minister Siraj and was comprised of other unnamed senior officials.

“Once inside the military camp, we were told we would undergo an ideological training on the current federal arrangement and we will be taught about the illegalities of the protests.”

According to Alemayehu’s letter, in the beginning, there were about 3,000 detains who came from the Oromia regional state. “But after a week, and the weeks that followed our numbers grew, in my estimate, to about 6000. We were told we would only be there for two weeks’ training and be released afterwards.”

Describing the situation inside the military camp, Alemayehu wrote: “It was the moment I experienced how hell breaks loose.”

“The heat is unbearable during day time, and at night the temperature drops to a freezing cold. There was only one meal a day (often bread) and the temporary corrugated iron shacks we were held inside had no running water, no toilets no sleeping places. Sometime in mid-October what looked like a cholera outbreak spread. We have seen many dead bodies being transferred out of the camp at night times.”

“I never wanted to see tomorrow”

The said training didn’t begin during the first week, Alemayehu’s letter further said, “but every night dozens of us would be called for investigations. I was lucky to not have been called for the night time investigations, but many of those who did often come back limping after being tortured beyond words.”

When the training began, it involved hours-long lectures given mostly by military officials on the legacy the late Prime Minister Meles Zenawi, the history of the party he co-founded, TPLF, and the 17 years sacrifices its members had paid to overthrow the military Derg in 1991. It also included the ruling party’s economic ideology of building a developmental state, the concept of federalism and multi-party democracy, according to the letter.

“But most of the time, we would just sit there in the blazing sun, hungry and thirsty, waiting for the officials to arrive. Sometimes, nobody shows up and we would be told to return to the barracks and come back tomorrow morning. But I never wanted to see tomorrow. All I wanted was to die and end my misery.”

Two weeks into his ordeal at the military camp, Almayehu was released after a “police officer who knew who I was and what I did for living in Awash spotted me there.”  “After what I think was this police officer’s attempt to help me, I was called one morning and told to pack up and be ready. There will be a car ready to transport me to Adama. That was it; no one to ask for justice; no one to ask for a letter to my employees, nothing.”

Alemayehu is back in Awash, from where he e-mailed us his letter. He is unemployed after the bank he was working for refused to take him back on “administrative grounds. I am now looking for a job.”

And he has since learned the devastating news of the disappearance of his fiancé. “Like me, no one knows where she is at now. I was told that after my mysterious disappearance she was struggling to face the possibilities that I may have simply deserted her. The last time she was seen in the town, where she was living with family members, was on Oct. 13, after that she has simply vanished; it is like she never existed.”

Alemayehu’s story of families torn apart and the hopelessness that follows resonates with hundreds and thousands of others who have been detained and still remain in one of the seven temporary detention facilities throughout the country.

By all accounts, it is a story of the human cost in a country under a sweeping State of Emergency; a country where the news of the release of thousands would come too little too late to restore the hopes that were dashed, for some, forever. AS

Cover photo: pictures compiled by activists (who are not yet arrested), of those who are currently detained both pre & post the SoE 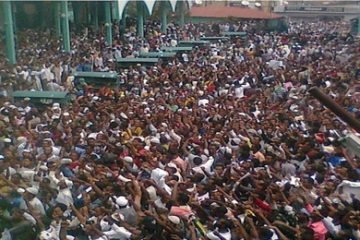