The revised presumptive tax system concerns category ‘C’ tax payers, which consists small businesses with an annual turnover of up to 100,000 Birr. It was conducted by ECRA in collaboration with the Ministry of Finance and Economic Cooperation (MoFEC) and has come into effect as of the end of the fiscal year on July 07, 2017.

However, the latest presumptive tax system saw disproportional tax amounts levied on small businesses. It was introduced after hundreds of tax assessors visited these businesses and came up with their tax estimates. Businesses in Kolfe, Axena Tera here in the capital Addis Abeba spent July 20 by shutting their doors in protest

Letters sent from ERCA to small businesses in Addis Abeba, as well as those in Oromia state show that traders of small businesses such as street side coffee vendors, barbers, internet cafes and small kiosks were asked to pay annual taxes as high as 50, 000 birr and in some instances more.

Kebede Chane of ERCA told the Amharic biweekly The Reporter that micro business owners including barbers/hair dressers, tailors, laborers, and street coffee vendors will be encouraged to pay “what they agree to pay”. He further said that authorities were reviewing complaints submitted by these businesses in order to consider scarping the taxes. The government would be happy if those sections of the society were simply self-reliant, the paper paraphrased the head of ERCA. A deserted street in Woliso city on July 17. Photo: Seyoum Teshome from Woliso

The new presumptive tax assessment was met with fury as small business owners in several cities and towns in Oromia regional state, which applied the same technique, and in parts of Addis Abeba, closed their businesses in protest. While majority of these business owners protested the move by simply shutting their shops, a few instances, such as the one in Ambo city, 120 kms west of the capital Addis Abeba, have seen protesters damage two state owned vehicles on Thursday July 13.

Kebede’s statement stands in sharp contrast to that of Nestanet Abera, ERCA deputy director for Addis Abeba tax division, who, on July 05, told journalists that the confusion was rather due to lack of understanding than the amounts levied. “We have not imposed such taxes. The confusion is due to lack of understanding and the tendency of considering daily incomes as taxes,” Netsanet said, “our assessments were based on fairness and are appropriate.” AS 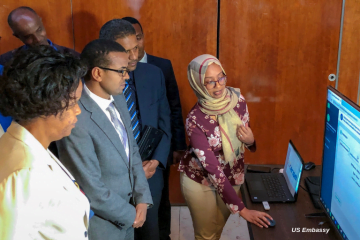