Addis Abeba, August 24/2017 – In an exclusive interview with Addis Standard, a group of elders who traveled from East Hararghe Zone, Gursum Woreda of the Oromia Regional State to the capital Addis Abeba have called for an end to the “Liyu police anarchy” in areas bordering the Oromia and Somali regional states.

The elders have traveled to the capital this week to submit a letter of complaint to the House of Federation (HoF). In the letter, viewed exclusively by Addis Standard, the elders have mentioned the death in recent months of 55 civilians in eight different villages who were killed by members of the Liyu police, a special police force established in April 2007 following an attack by the Ogaden National Liberation Front (ONLF) rebel group on a Chinese oil exploration that killed 74 Ethiopians and nine Chinese workers. However, since its establishment the Liyu police is repeatedly accused of committing atrocious crimes against civilians with pure impunity.

“The situation in the region is very bad”, said Usman Omar, one of the group of eight elders, “we have been under the Oromia Regional state since the 2004 border referendum [because] we [chose] to but we are forced to pay a heavy sacrifice for that.”

“The Liyu police Special Forces are all over the area and [our people] are being forced to give money for no reason; lives are lost and our girls are being raped,” said Abdi Yuya, another elder, adding “the Oromia Region police forces, who are supposed to be protecting us, are wondering around doing nothing; they are also confiscating our rifles so that we can’t protect ourselves.” Abdi Yuya further said that the Liyu police have first taken over two of the eight villages then recently added six more “by force and started to make crimes against us. [We want] the federal government to help us solve these problem.” According to the elders, the situation has been worsening in recent months. In March 2017, Addis Standard reported that border incursions by the Liyu police into these areas, including West Hararghe,  and are administratively under the Oromia regional state have resulted in the death of more than 30 civilians.

The group of elders who are now in Addis Abeba say they “came here [to the capital] to address our complaints but we couldn’t find anyone to hear us.” Desperate to get answers, on Monday they have traveled to Bishoftu, 40 km south of Addis Abeba to meet with members of the Aba Gadda council.  “The Aba Gaddas have promised to help us to meet with Abadula Gamada, the Speaker of the House of People’s Representatives, but an official from the Oromia Regional state security affairs bureau told us to go back,” said Abdi Yuya, “He also told us that they only knew of two villages that were occupied by the Liyu police but [we know] that eight villages are currently controlled by the Liyu police.” He also said that recently, the Liyu police have broken in to a health center in Qore city and replaced the Oromia Region’s flag by the Somali Region flag “chasing all the health workers away”.

Addis Standard’s repeated phone call attempt to reach out to Addisu Arega Kitessa has not been successful as of the publishing of this article. But he confirmed in his Facebook post written in Afaan Oromo that two people were killed on Monday, August 21, by armed men who crossed from the Somali regional state into the town of Gumbi Bordede; he also said a similar incident left three people wounded in Chinakson town of Gursum woreda, in east Hararghe.

The news of renewed border clashes in the last weeks was one of the three reasons taken up by online Oromo activists to call for a region wide five-day stay-at-home protests, which began yesterday. According to information collected by Addis Standard since yesterday, the strikes have affected several areas throughout the region, mainly areas in east and west Hararghe, including the busiest cities of Awoday and Haremaya;  cities in west Arsi especially Shashemene (Kebele 01 in the center of the city), as well as the cities of Kofelle, Adaba and Assasa; cities in west Showa, west of Addis Abeba – Ambo and Ginchi; in western Ethiopia Neqemte, Gimbi, Nejo and Gute as well as towns in Oromia regional state Special Zone surrounding the capital Addis Abeba, especially the town of Burayyu.  Shops and banks were closed and transport activities disrupted.

In addition to protesting against the repeated border clashes, the stay-at-home strike in the region is also aimed at drawing attentions to imprisoned members of senior opposition party politicians such as Bekele Gerba and Dr. Merera Gudina, as well as countless others from the Oromo Federalist Congress (OFC), which is popular in the region, and the recent hike in presumptive tax introduced both by the federal revenue authority and the Oromia regional state revenue office. In a phone interview this morning, a senior security official in Shashemene city admitted that the city is “tense” since yesterday and said, “We are not out of the woods yet.” He said city police is considering to request regional police backup if “the situation remains as tense.”  Speaking on conditions of anonymity he also blamed the introduction of the presumptive tax increase as “ill-timed and inconsiderate.” “As it is we have not yet dealt with the effects of last year’s protests,” he said. A yearlong protest that began in Oromia and spread to cities in Amhara regional state has resulted in the declaration of a state of emergency, which ended in the first week of August after ten months.

Our source said although authorities at the city’s revenue office have almost suspended the full implementations of the tax hike following the first round of state-at-home protests, lower level officials have continued following the new rules,” he added, “that has created a lot of anger and frustrations.”  AS. 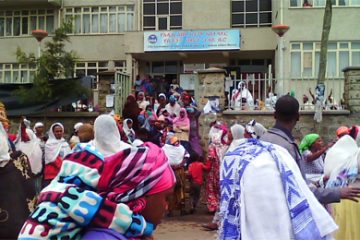