The British government has contributed $1 million for Humanitarian Response Fund (HRF) and Central Emergency Response Fund (CERP) of International Organization of Migration (IOM), set up to help Ethiopian migrant workers deported from the Kingdom of Saudi Arabia. Though UK is the biggest contributor so far, at just $3.7 million IOM is still far short of the required funding to rehabilitate returnees which is estimated at $15.6.

“Today I was able to witness first-hand the enormous challenge the Government of Ethiopia is undertaking to try and help the extraordinary numbers of people who have returned from Saudi Arabia over the past few weeks,” Ambassador Dorey said, adding, “I am full of praise for the work of the International Organisation for Migration and others in trying to deal with this massive problem.”

“We are extremely concerned about the welfare of the returnees, which is why the UK has contributed nearly $1million to the IOM through pooled humanitarian funds as part of the international support effort,” said Ambassador Dorey.

He also promised that his government will “be looking at other ways” in which the UK can help the Ethiopian government and the returnees. “We encourage other donors to do all they can to plug the funding gap which exists.” 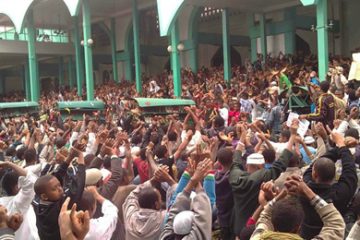