It was a dream of a few statesmen that helped the old Pan-Africanism born in the ‘60s. It’s now time, or even long overdue, for a fresh one to come

Dr. Paul G. Adogamh, Associate professor of Political Science at the University of Wisconsin-Whitewater, believes Pan-Africanism, the oldest vision of Africa, was and still remains the struggle for unity and empowerment of Africans against oppression and exploitation.

The first generation of pan-African movement leaders mainly Kwame Nkrumah, Julius Nyerere, Gamal Abdel Nasser, Haile Sellasie I, Jomo Kenyatta, and others have believed that a unified Africa was the only way to take the continent from A to B and that the border lines that were drawn by former colonialists were artificial demarcations between African people that needed to be abolished.

The only difference amongst these noble statesmen was the time and the how. The Casablanca group of countries, led by Nkrumah of Ghana, wanted an immediate unification. The Monrovia group, led by Nyerere of Tanzania, believed an immediate unification of Africa in 1960s was ideal but a gradual approach of unification with regional integration first followed by a continental unification was more practical.  Nkrumah wanted the United States of Africa ‘now, now’, whereas Nyerere was of the exact opposite. “Any number of African states uniting in any form – economically or politically, regionally or otherwise – was, for Nyerere, a step forward. Nkrumah believed, not unreasonably, that regional groupings and associations would make continental unity even more difficult” and fear that a “delay in political unity would expose individual African states to neocolonialist manipulations,” writes Issag Shivji, Professor of African studies in the University of Dar es Salaam.

As it turns out, Nyerere’s gradualist approach of African unification won the day when in 1963 the Organization of African Unity (OAU) was formed in Addis Ababa, Ethiopia. It was the first attempt to make real the vision of a united Africa. The OAU was disbanded in 2002 and was subsequently replaced by the African Union Commission (AUC). Today, including the newly declared independent state of South Sudan, Africa has 54 nations, but none of them (except for South Africa) are adequately represented in the international power distribution and the UN system. “If numbers were horses,” Nyerere once said, “Africa would be riding high!”

Yet 50 years later, Africa remains one of the weakest continents in the world with most of its political and economical affairs played by super powers than by itself. The recent case in Libya has just demonstrated that clearly. “Over half a century, despite receiving development aid, Africa is more indebted and economically disoriented. The majority of African countries are heavily dependent on aid, 34 being categorized as Least Developed Countries (LDC) in the world. Over 50% of Uganda’s and Tanzania’s national budgets are run by aid” says James Shikwati, Director, at Inter Region Economic Network and CEO of the African Executive.  “In such cases, the leadership has little incentive to listen to their electorate but donors.”  He is of the belief that in most instances aid is benefiting the ruling elite of Africa more than its people

The trouble with Africans dates back during the times of the Trans Atlantic slave trade that made “Africans fighting Africans”, as Nyerere fondly used to say.  It had a profound impact on how the continent shaped itself to the present day. And the new form of exploiting Africa, as Professor Shivji argues, comes in the form of what he calls “The Devil Three,” the International Monetary Fund, the World Bank, and the World Trade Organization policies and conditionality on aid, debt and trade. And to fend this modern way of exploitation of Africa “we need Pan-Africanism more than ever before.”

But unlike in the past today’s Pan-Africanism has new challenges and requires new strategies. The idea of a modern Pan-Africanism faces, first and foremost, the rise of regional hegemony and disparity among the 54 African states. “Nigeria’s 140 million populations are hundreds of times more than some small African countries. South Africa has the most developed economy with a capacity that is almost equal to that of [40] other sub-Saharan countries combined, or one-third of the African continent. South Africa, Nigeria, Egypt and Algeria account for half of the continent’s GDP and nearly a third of its total population. Gabon has a very small population but large oil deposits; Botswana has diamond mines and a multiparty democracy;” says Dr. Adogamh.  Today, South Africa, like the colonialist of the past, angers many others in the continent by supplying arms to neighboring African countries, penetrating markets of other countries with manipulative politics as a cover than fair trade (its role in the so-called peacemaking process in the Democratic Republic of Congo (DRC) has helped its corporate companies to take hold of mining riches in that country).

Be that the case, however, it is hard to find any other continent in the world whose people bear a strong affinity, “emotional bondage and political solidarity as do the people of Africa.” professor Shivji says.

Yet, there are three major points to consider at this junction. The first is, any prospects for integration must not only take into account the magnitude of social, political and economic similarities or disparities but have to evolve new strategies to deal with this development so that Pan-Africanism does not fall prey to the ambitions of stronger African states. Second, although the need for economic development in Africa outweighs any other urgency the continent may have, the movement for a new Pan-Africanism should not primarily be about development issues. It was primarily about a political ideology that nurtures Africans’ vision to come as one and must still be about that.

Third and most important, it has now become clear that the previous approach to integration of Africa hasn’t worked much. A new Pan-Africanism must have a clear divorce from its predecessor as the challenges for Pan-Africanism then have thinned and gave way to new challenges. Most of African leaders have been inept and greedy to implement the concept of Pan-Africanism and have made Africa a perpetual beggar of foreign aid, which became an important source of wealth and legitimacy for many of them. Time to call that off.

Orienting the average African from a village to continental focus will play a crucial role in addressing the negative effects of disparity between states has on the people of Africa.  It will also help make the new Pan-Africanism a bottom–up approach based on people’s ideology, and not that of its politicians.

No matter how big sacrifices are and no matter who pays what,  without a genuine democratic participation and dialogue by the African people to determine what shapes their own continent must have in the future, no price paid is worth the reward. 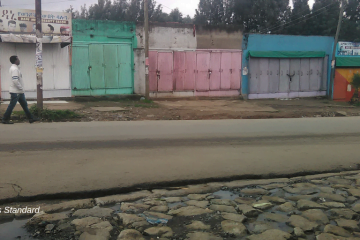