Addis Abeba, December 21/2018 – Over the last few days, there has been yet another communal violence in Ethiopia, an all-too familiar story. The Borana-Garri conflict in Moyale and its environs is historically old, yet it defied the test of time and efforts (albeit partisan) by successive governments and continued to claim the lives of innocent civilians, the displacement of those it spared and cause wanton destruction of property. The last ten days have seen the latest of this atrocious cycle of violence. But unlike other times, the silence from the federal government and the regional states of both Oromia and Somali regional states is near deafening.

Since the last week of September this year, the areas bordering Benishangu-Gumuz and Oromia regional state are nothing short of a war zone; not to mention the security crisis in western Oromia the dynamics of which is not understood fully.

There has been a 5% increase in inter-communal violence since Prime Minister Abiy’s swearing-in in April.   With over 1.4 million people displaced since the beginning of this year, Ethiopia now has more new conflict-driven Internally Displace People (IDPs) than any other country in the world.

The state is too focused on the long-term transformative measures and is showing a growing ineptitude towards the apparent lack of protection for citizens’ lives and property. The government must rearrange its priorities and first and foremost meet its prime duty of providing basic security to citizens.

The long run measures can wait

To be fair to Abiy’s nascent administration, ethnically motivated conflicts are not new to Ethiopia.  They have been the reality of our multicultural society primarily fueled by competition for resources, ethnic grievances, and exclusion from the existing power structure. Conflicts “have flared up with all the major upheavals and subsequent power vacuums of recent decades, such as the agrarian reforms of 1975 and the introduction of the federal system in 1992-1993”.


The two previous regimes before the Ethiopian People’s Revolutionary Front (EPRDF), attempted to forcefully suppress ethnic tensions. Their coerced assimilation policies backfired badly leading to the rise of ethnic nationalism and secessionist movements. The Tigray People’s Liberation Front (TPLF) dominated EPRDF devised an even worse policy: a superficial multinational federation when in reality the structure was not worth the paper it was written on.

Ethiopia has never had the opportunity to properly deal with its ethnic problems. Since the creation of modern Ethiopia, rulers at the helm of the state had always denied the country the chance to form a government through deliberation, practical compromise, and fair participation of all stakeholders.

Now everything is out in the open- a result of (perhaps also an unintended consequence of) true freedom.  A series of demands are being raised at both individual and collective levels.  At least five zonal councils in SNNPR have petitioned for statehood; competing claims and interests are being raised concerning the capital city; “unionist” and “federalist” groups have intensified a proposition of their differing visions on the federal versus unitary system – often resulting in toxic online confrontations; and most worryingly, the Amhara and Tigray regional states have escalated their territorial disputes.

In a way, it is a good thing that all of these issues are being raised so we can deal with them for once and forever – one may argue. It creates an opportunity to finalize our nation building and get a step closer to forming a more palatable union. Even though we see more communal tensions during Abiy’s era, we need to hang on to the hopes that this is practically the beginning of good times.

However, Abiy’s administration needs to understand that establishing good government from reflection and choice cannot be achieved overnight. As we are attempting to strengthen our house’s foundation, the house has caught fire, and we need to strategize. We do not have the luxury of waiting for the ultimate fix. We need a short-term plan to put out the fire, i.e. stop the internecine conflict cropping up all over the country. Then, and only then, we can return to the task of establishing a lasting democratic government and a society based on peaceful coexistence.

Possible causes for the surge in communal violence

Political scientists have identified at least four major causes of ethnic conflicts: ancient hatreds, manipulative leaders, economic rivalry, and spiral of insecurity created by the weakening of the central government. At least two of the listed causes may have significantly contributed to the recent surge in ethnically motivated conflicts in Ethiopia.

First, it is indisputable that the weakening of party-state security apparatus has created a security vacuum. Using hardline and violent security tactics, pre-reform EPRDF effectively kept a cap on any non-state sanctioned activities. Even though dismantling the oppressive security structure was part of the reform, the state needs to quickly come up with short-term plans to fill the power vacuum.

Second, it is also indisputable that there are “forces of darkness” who would like to see Abiy fail and the reform aborted. It is not just vitriolic activists and biased media who are resisting the reform led by the premier.  It comes as alarming that Tigray regional state president and party chair, Debretsion Gebremichael, is quoted by media as having expressed his belief that the recent arrest of former officials accused of corruption and human rights abuse is ethnically motivated to attack Tigrayans.

It is only natural for Tigrayan elites to feel bitter resentment since they lost their outsized grip on power with an unexpected pace and magnitude. Where things currently stand, it is impossible to say the state of Tigray is truly part of the federation – and judging from its social media activists – nor is it imaginable that it will abide by the supremacy of the federal law. However, the question is: Are there any groups taking actions to sabotage the reform?

A statement released by the Oromo Democratic Party (ODF) executive reveals that the security crisis in Benishangul-Gumuz – Oromia border area and western Oromia, among others, is the work of saboteurs.  Although it didn’t explicitly mention the role of a faction or two of the Oromo Liberation Front (OLF) rebel groups, the implication is written all over the statement.

Looking at all of these it is not unreasonable to assume that the once powerful and resource-rich security apparatus that stretched to every corner of the country had not folded up entirely within less than a year. By the same token, the free ride and the red carpet welcome provided to former rebel groups after the government has reached at some kind of agreement with all, an agreement the government is adamant to keep secrete, is not as shining as the barrage of news suggested.

Not surprisingly, communal violence causes both physical and moral destruction of a nation. The ubiquitous ethnic conflicts are inducing stress and anxiety at all levels of the society. It has become a household concern and discussion across Ethiopia. This is a problem requiring the most urgent solution.

Every country has its own problems of varying degree, and it is not uncommon for countries to come up with special measures to deal with their most pressing issues. Desperate times call for desperate measures. For example, Egypt has established a Rapid Deployment Force (RDF) in 2014 to tackle the increasing terrorist threat coming from chaotic Libya.  The force is an elite military unit mainly comprised of airborne troops with special training and equipment. Somewhat akin to the U.S. 82nd Airborne Division, it is presumed to have the capability of responding to domestic crises within hours, not days.

After months of carnage in Benishangul-Gumuz-Oromia border areas, the government has established a “Command Post” yesterday. It is one encouraging step, but form a uniquely poised Rapid Deployment Force to deal with the current surge of violence. The administration should consider establishing a well-equipped federal force capable of responding within hours to every corner of the country to stop the carnage. This unit must be supported by other proactive entities capable of providing early threat warnings and identifying problem areas.

It is understandable if PM Abiy has reservations relaying on security forces, given its past culture of unjustified violence and impunity. Its use of heavy-handed security tactics has been the main source of public grievances against the previous government. An interviewee noted that the public is accusing PM Abiy’s administration “of not doing enough to clamp down on ethnically-motivated killings and claim Abiy himself is turning a blind eye to the conflict in an attempt to avoid the hardline security tactics frequently deployed by the previous government”.


However, PM Abiy should not be discouraged in using the security sector because of its past illegitimate use of force and abandon government’s monopoly on violence. The problem was never having a strong and effective force, nor the use of it. Rather, it was the lack of accountability and predictable institutional behavior. If we make sure the security forces adhere to the rule of law and provide efficient and impartial safeguards and security, the public not only will trust them, but rally behind them.

If the state is unable to cater to and protect the lives and property of its citizens, people will seek alternative means of securing themselves. We have seen the rise of vigilante groups and ethnic militias in different parts of Africa where security gaps are left unattended by the state. At its worst, the current ethnic strife may create an opportunity for terrorist groups to inflict harm.

The September conflict in the outskirt of Addis Abeba exposed the utter unpreparedness and slow response of the government to mass killings, even at the doorsteps of the capital. Security forces were unable to timely intervene and stop the conflict that had lasted no less than three days and left many for dead and displacement.

So far Ethiopians have exhibited an impressive self-regulation. Despite the glaring insecurity problem for over six months, we have not seen the rise of an organized armed group, the likes of which neighboring states like Somalia has seen, to fill the security gap, at least not yet.

Even while being cognizant of the various limitations the state is under, the mere fact that the highly creative and reformist premier fails to treat the rampant pogrom as his highest priority defies belief. This may be easier said than done, and having a specialty unit of Rapid Deployment Force will not alone solve the problem. But at least its prompt response at the scene of conflict will stop further killings and boost the nation’s sense of security. Priorities please! AS

Entertainment: The 13th Ethiopian International Film Festival to kick off 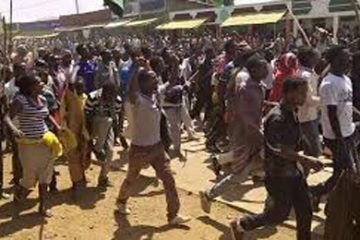