The struggle to bring in contemporary dance in Ethiopia

Save for a courageous struggle by one group, Ethiopia is one of the countries in Africa where contemporary dance remains unpopular 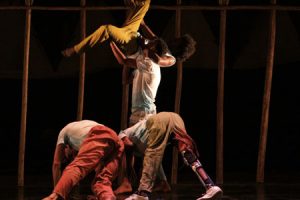 East Africa is a thriving place for experiencing contemporary dance. With the many popular dance forms that exist in the 21st Century; Kenya, Tanzania, Rwanda and Uganda all play host to annual dance festivals, inviting worldwide artists to share in the exchange of experiences for the development of African dance cultures. Many of these countries are home to a dazzling fusion of contemporary dance performances.

But that doesn’t necessarily mean Ethiopia has completely missed out on the art of the dance. In 1967, Menen, one of the pioneer magazines in Ethiopia, wrote the story of The Alvin Ailey Dance Theatre Company. “The profoundly moving talents of Choreographer Alvin Ailey displayed a full integration of dance & drama leaving a lasting impression on the audience at the Haile Selassie I Theatre”. Emperor Haile Selassie I invited The Alvin Ailey Dance Theatre Company who later became the most important black American choreographer in the history of modern dance.

Ethiopia was already exposed to the full intensity of modern dance ideas from the late 60’s and the idea has grown slowly since then.

In 1996 the Adugna Dance Theatre Company was formed under one of the programs run by The Ethiopian Gemini Trust. It became the first Contemporary Dance Company in Ethiopia. Gemini Trust which was founded in 1983 by an Anglo-American pediatrician, Dr. Carmela Green Abate, was set up as an NGO providing a comprehensive family approach to foster better livelihoods to some of Addis Ababa’s poorest people. What started out as an experimental project harnessing the creative talents of street children is now a vibrant, international success story.  Adugna Company is now a group of seven young professional dancers, some of whom come from Gemini families, and received training for a period of five years before launching their career as a professional dance company performing worldwide.

Addisu Demissie, artistic director of Adugna says the group “don’t have our own purpose built dance studio but we are very thankful to Gemini Trust for giving us the use of space to practice and rehearse continuously over the past fifteen years”.

Adugna dance company members all take part in teaching contemporary dance to local Ethiopians free of charge, three times a week, to pass down the skills that they themselves had gained from the various choreographers who came from abroad mostly on voluntary base to share the knowledge of Contemporary dance techniques practiced worldwide. A major part of Adugna’s development has been the exchange of skills between dancers around the world. They have also benefitted from touring the U.K, Burkina Faso, Madagascar, Kinshasa and Kenya which hosted famous dance festivals where they performed.

Equally important is Adugna’s work in the community.  Adugna works with all age groups, including the disabled and the elderly, using dance and theatre to educate and inspire a wide range of issues, including health, civil rights and discrimination.  In many ways Adugna symbolizes artistically what Ethiopian young people can achieve if given the chance, and their performances reach out to other Ethiopians that are in need of hope and inspiration.

Independent choreographer and dancer, Mintesinot Getachew was chosen by the German based choreographer Sasha Waltz, to lead a project called ‘Dance Move -Urban Space’ in February 2011. The initiative was supported by Goethe Institut. The aim was to enable the growing community of emerging dancers to work together in circus, martial arts, traditional or hip-hop dance, and receive a contemporary dance training that would culminate in a film which was eventually screened at the National Theatre. “It was a very intense process which took two months to search for talented dancers. We auditioned over 300 dancers and 25 of them were chosen for the project,’ Mintesinot told this magazine.

Much can be learnt from the neighboring East African countries hosting dance festivals annually in their home country. While Ethiopia’s government has not made a plan to subsidize this kind of initiative, Mr. Aweke, Public & International Relations Director at the Ministry of Culture & Tourism says “here are so many Ethiopian dancers who come to us for a letter of recommendation to go abroad to perform their work and we constantly give them this support technically.”

In July 2010 Rwanda played host to a week-long dance festival that attracted over 10 participating countries from all over the world. According to Mr John Gara, the Chief Executive of the Rwanda Development Board (RDB), the event attracted over 500 participants worldwide. “Among other things, RDB is mandated to promote tourism and this is one way of promoting tourism and attracting more cultural tourists into Rwanda. We are doing this in collaboration with the Ministry of Sports and Culture,” Mr Gara said.

Independent Ethiopian dancers are mainly subsidized by Cultural Institutes such as Alliance Ethio-Francaise and Goethe institut who recognize that the public will benefit from contemporary dance experiences. Making these small steps each year to include dance on their agenda becomes yet a significant stepping stone for professional Ethiopian dancers.