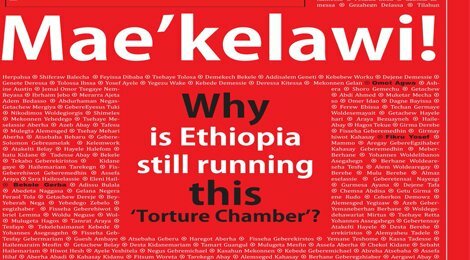 As you walk by the area, nothing looks out of ordinary. It is a bustling part of Piassa overcrowded with – as many parts of Piassa are – bars, shops, hotels and restaurants. Pedestrians go back and forth past it oblivious of its presence (or perhaps terrified of it.)

The Ethiopian Federal Police Force Central Bureau of Criminal Investigation, known in Amharic by its bone chilling name, Ma’ekelawi, is a time defying institution which has been around for more than half a century, and has been used (and abused) for the same purpose: to detain, without due legal process, people alleged to have committed grave crimes against the state, the people and the constitution.

But describing Ma’ekelawi simply as “a place of detention” is a gross parody of its fundamental purpose for existence. It isn’t just a place of detention; it is, by any definition, a state-run “Torture Chamber” built by an extinct repressive government but preserved and run by a government which proclaims itself ‘democratic’.

Why is it still around?

This is a question that directly points at the essential explanation for the very existence of Ma’ekelawi as a tool of repression: lack of political will by the incumbent to render the brutal practices inside Ma’ekelawi irrelevant as per the values, principles, and rules of the current constitution and that of international covenants Ethiopia is a signatory to.

Owing to that Ma’ekelawi remains to be the only constant throughout the eras of monarchy, socialist totalitarianism, and federalist devolution, which indicates that the nature of the Ethiopian State is, at its core, unchanged; that it is the same; that it is a state which drives its authority (and therefore legitimacy) from force.

This is not a conclusion this magazine is asserting based on allegations. Dissect the often too conspicuous correlation between political dissent and the people overpopulating Ma’ekelawi suspected of (and charged with) crimes against the state, the people and the constitution. It will give you an idea or two on why successive states chose to keep that institution intact even as it continued depriving, in most instances, due legal process to the people under its custody.

It is no hush-hush that the overwhelming prisoners in Ma’ekelawi are political prisoners brought from all over the country. That leads to the question of why is that so.

The existence of too many political prisoners in a given country points a finger at the function of a dysfunctional political system. And politics becomes dysfunctional when it is not governed by the rules prescribed for it in a given constitution. In other words when the politics is extra-constitutional (not to say unconstitutional) the only way a state presiding over such politics deals with dissent is force. In present day Ethiopia Ma’ekelawi has that force, perhaps in abundance.

Part of the reasons for that is because Ma’ekelawi is a legal black hole that was never made subject to public scrutiny; it remains beyond and above any form of accountability. The fact that the state kept it running until today with no reform to its function is symptomatic of the ailments of Ethiopia’s politics. But above all, it’s a symbol of a regime that acts contrary to the values, principles, and rules of the constitution it championed.

First, most of the officials in charge of Ma’ekelawi lack an understanding of the basic constitutionalism that the state they devotedly serve has put in place more than two decades ago. Detainees’ basic rights such as access to lawyers, family visits, and their rights not to be tortured, among others, are all protected by the constitution. But at Ma’ekelawi they are violated on everyday basis.

Third, there is a visible logistical problem. Ma’ekelawi lacks equipment such as forensic materials, machines with which to identify forgery, professional cameras, translation equipment (to help detainees who come from several parts of the countryside and who don’t speak Amharic to communicate with their investigators), and proper room set-ups where non-abusive investigations could take place.

The result is that, in the absence of constitutional discipline among the bureaucrats who run the institution, or of skills and technical equipment, brute force reigns supreme. And this force makes Ma’ekelawi what it is.

Apart from the symbolic demonstration of repression and of contempt to constitutionalism, there are two compelling reasons why this magazine would like to see the functions inside Ma’ekelawi dismantled.

First, more often than not, the institution’s conduct (that it holds detainees brought all over the country without – in most cases – the knowledge of their respective regional states) runs against the fundamental federal system the country has put in place 25 years ago today. (Please see story here.)

This leads to questions on the division of police powers between the Federal police and the State police. Questions such as which police arrests, and investigates the case of which offender? When is the State Police expected to hand over a detainee/suspect to the Federal Police? When is a State investigating police officer handing over a suspect to a federal investigating officer? And what is the modality of transferring a detainee from state detention facility to a federal detention facility?

These questions in tern require the rethinking of the rights of regional states to have their own power over some crimes which they should investigate on their own initiatives, in their own criminal investigation bureaux, under their own State constitutions. This approach in itself initiates the de-codification of the federal criminal code and a (re-)codification of its State equivalents at the State level, and a corresponding division of investigative powers accordingly. But that will bring in relief to those detainees who should not suffer to prove their innocence to an investigator who doesn’t speak their language and is unable to gather proper evidence against them due to distance. It will also stop the federal police’s intrusion against state sovereignties, its practice of snatching individuals without even the knowledge of the later, and detaining them inside Ma’ekelawi isolated from the outside world, a common practice in today’s Ethiopia.

Second, due to its history of the past Ma’ekelawi should be a place to remember the past and not to live the present. Countries that have, through costly struggles, overcome a repressive system and have instilled a democratic one in place (just like what today’s Ethiopia claims to have done 25 years ago) often start their transformation by dismantling the functions of repressive institutions and turning them into – among others – museums and monuments where the past can only be remembered and not lived. That’s what Kenya did with Nyayo Torture Chambers; South Africa with Robin Island; Senegal with Gore Island; and Poland with Auschwitz, among the few examples.

That is what Ethiopia should do with Ma’ekelawi too, because a new Ethiopia must have no business keeping old, repressive institutions.