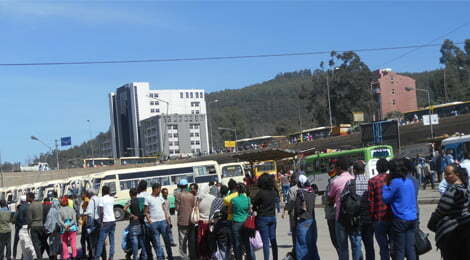 Taxi drivers in Addis Abeba and its surroundings are striking as of this morning against a new traffic regulation which started to be implemented as of Monday 22 February.

In 2009 the Addis Abeba City Council favorably voted to ratify the new traffic regulation, Road Transport and Traffic Control Regulation. Following the 2009 ratification of the amended regulation, the Addis Abeba Transport Bureau (AATB) claims to have had discussions with taxi and city mid-bus owners’ associations as well as the society at large before reaching at the recent decision to implement to regulation, seen by many as too strict and unpractical.

Up on the news that the new regulation was being implemented taxi drivers and city dwellers have taken to radio stations call-ins expressing their fears that the regulation ignores several circumstances, including shortages of proper taxi parking areas in the city, bad road conditions and the corruptible nature of traffic police officers. 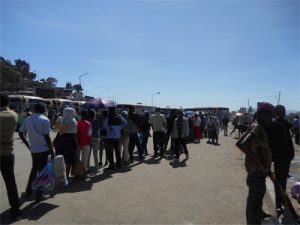 The new Traffic Control Regulation has six categories that begin from deducting two points for light traffic law offenses such as improper parking and commuting extra passengers beyond the carrying capacity of the taxis. The Regulation stipulates a six month suspension of driving licenses and additional driving lessons for drivers who lost 14 -16 points due to previous offenses. A driver who has 17 -19 points deducted from his/her records will get his/her driving license suspended for a year; and any driver who gets 20 and above points deducted will have his/her driving license permanently revoked and can only re-apply for a fresh driving lessons after a gap of two years. 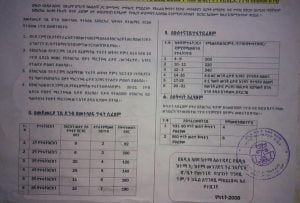 Yabibal Addis, head of the Addis Ababa Transport Bureau (AATB), said the regulation was “more than necessary” as it intends to curb the increasing traffic accidents in the country that are resulting in the death of more than 4,000 Ethiopians every year, and injures twice that number. Property damages due to traffic accidents during the year 2014 – 1015 were estimated to be slightly more than one billion ETB, according to Yabibal.

The federal transport bureau announced this morning that the implementation date for the new regulation was postponed by three months. But the announcement came a few hours too late as roads in all the four parts of the city were deserted of minibus taxis starting from early hours affecting thousands of commuters who resorted to walking to make it to their work stations.

According to Abel Daniel, an employee of AATB and one of the hundreds of young Ethiopians involved in regulating taxi routes in the mornings from dispatching areas, as of late this morning the bureau has started registering plate numbers belonging to striking taxi drivers to “penalize those who refuse to come to work”, Abel told Addis Standard. State owned blue buses that provide free transport to the city’s civil servants were seen trying to provide transport to hundreds of thousands of stranded commuters.

AATB estimates that Addis Abeba is home to close to more than 4, 000 white minibuses, 8,000 blue minibuses and more than 500 mid-buses (known as Higer buses), all providing the much needed transport within the city and its environs. It is estimated that the blue and white minibuses together provide transport services to about 1.1 million commuters every day, while the 500 mid-buses transport no less than 700, 000 commuters. The Addis Abeba city bus enterprise operates more than 800 city busses that transport an estimated 1.2 – 1.3 million passengers per day.

Taxi and bus owners’ association are often at odds with the government over issues such as low taxi fares and forced destinations, which are both regulated by the government. Recently discontent is also often heard from taxi drivers and commuters alike over the government’s reluctance to adjust the cost of fuel price in line with the global prices index, which continued plummeting as of the last five months.