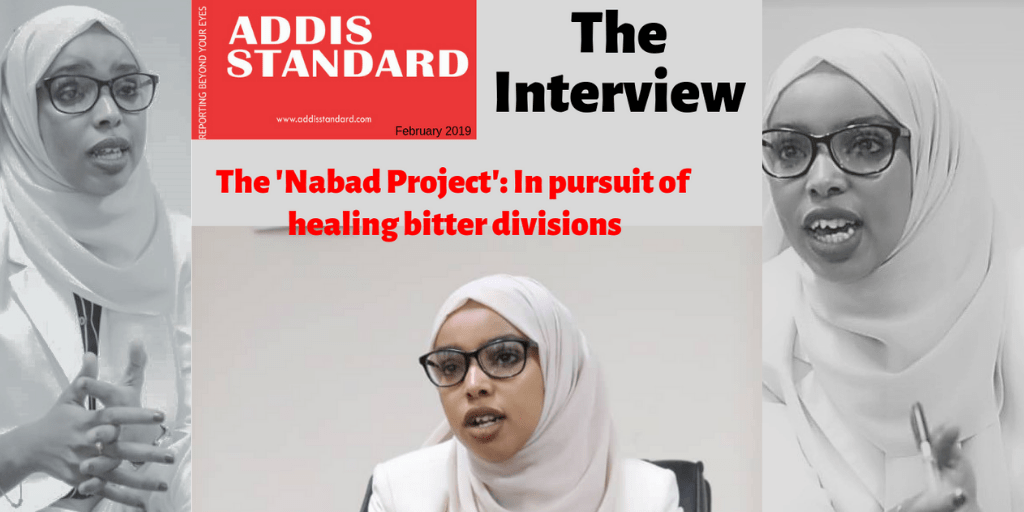 The Interview: The Nabad Project: In pursuit of healing bitter divisions

Addis Abeba, February 11/2019 – Filsan Abdi, 27, is a UK based Speech and Language Therapy consultant and the founder of the ‘Nabad Project” – ‘Nabad’ in Somali means ‘Peace’. It is a recently established campaign for peace and reconciliation between various ethnic groups in Ethiopia.

Born in the city of Dire Dawa, in Eastern Ethiopia, Filsan spent most of her teen and adulthood in Addis Abeba, where she had her first academic degree in Leadership and Management from the privately owned Unity University. Later on on went to Leister City in England to do her second degree in Communications Science and Disorder’, in university of Hertfordshire, but it is her studies in the field of communication which would become one of her bedrocks that helped her make her first move in organizing the ‘Nabad Project.’

Filsan was raised among her Somali parents who are from Jigjiga, the capital of Somali regional state. As much as she was an individual who is optimistic of her country’s journey to a better future, the decade old devastating human rights record in the region, where she always had a bond as an Ethiopian Somali, had impacted her deeply.

The recent headlines of mass killings and displacement in Ethiopia in general and the Somali regional state in particular kept making her and the people around her wary of the future. Above all, as she says, it was the deadly conflict between armed members of Somali and Oromo communities which made her decide to “break the silence and throw a stone for change than being a part of the spectator by the side lanes.”

Hundreds were killed and more than a million civilians were displaced in the last two years only from areas bordering the Somali and Oromia regional states, and Filsan watched it unfold with horror – from afar and on the ground. What she experienced during her visits to the region was only a trauma, discontent and a broken spirit. It eventually led her to establish the “Nabad Project”, a peace initiative that involved a group of young volunteers who defied the ethnic divide and came together with a promise of leaving their differences aside for a future of peaceful coexistence.

What began from the Somali region, the ‘Nabad Project’ has now came too far in turning differences into opportunities to sustain a county with people of shared destiny; “together for good.” Today Filsan is proud to call the ‘Nabad Project’ volunteers the ‘Peace Engineers’ in the making.

A few weeks ago, Yared Tsegaye, Deputy Editor-In-Chief of Addis Standard, sat down with Filsan Abdi in Addis Abeba to discuss the ‘Nabad Project’ and a range of other topics affecting the youth in her community and beyond.