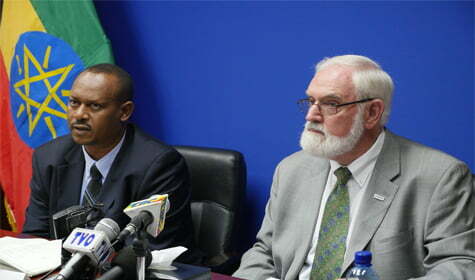 The US announces nearly $128m in additional humanitarian aid to Ethiopia

The United States Agency for International Development (USAID) announced today nearly $128 million in additional humanitarian assistance to help the people of Ethiopia face the impacts of the worst drought in fifty years.

Triggered by El Niño, the drought follows successive poor rainy seasons and now exceeds many people’s ability to cope. “Today’s announcement will provide vital humanitarian aid including relief food assistance, safe drinking water, nutrition services, and mobile health teams to help address the needs stemming from the drought” a statement from the US embassy in Addis Abeba said.  In addition, it will also help people by providing seeds for food production during the upcoming rains.

Acting Assistant Administrator for the Bureau of Democracy, Conflict, and Humanitarian Affairs Thomas H. Staal announced the new funding in Ethiopia alongside Commissioner Mitiku Kassa of Ethiopia’s National Disaster Risk Management Commission. In his remarks, Mr. Staal said, “This new funding underscores the United States’ commitment to working with Ethiopia to prevent this drought from becoming a humanitarian catastrophe.”

With this announcement, the United States has provided nearly $705 million in humanitarian assistance since October 2014, and continues to be the largest humanitarian donor to Ethiopia. The U.S. commends the other donors who have contributed generously to the drought response, and encourages others to join this international effort to address the drought’s impacts and also protect hard-earned development gains.

Ethiopia: The dawn of another ‘structural opening’

Obituary: Admasu Berhanu - The loss of an icon