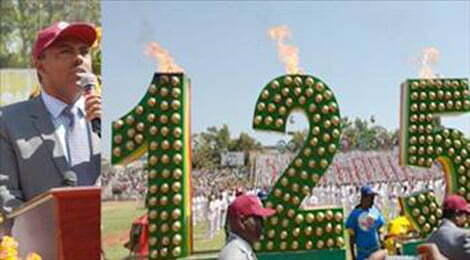 Addis Ababa has just completed celebrating its 125th year of founding anniversary, which was being marked for the last one year, as Ethiopia’s capital. Being the capital city of a country with a history that stretches over 3000 years, it’s safe to say that Addis Ababa is a very young city. But in just over a few  decades the city has gone from being a capital of a nation to a political capital of the continent Africa, a seat for hundreds of international diplomatic missions and organizations and one of the “fast evolving cities”, according to Lonely Planet. It has become the business center for many international institutes and organizations too, and has grown very big, became highly populated as compared to its young age and changed a lot in many aspects.

As a capital city, Addis Ababa has been and continued to be hugely challenged as dire shortages of decent housings and road infrastructures  continued falling short of meeting the demands of its growing numbers of dwellers. The federal government has so far spent more than 15.4 billion birr in building 207, 000 housing units nationwide of which 140, 000 are located in Addis Ababa and built at a cost of 7.8 billion birr.

As was reported by this magazine in its Nov. edition, the government has plans to build additional 35,000 condominium houses in Addis Ababa alone in the next fiscal year, and a further 170,000 within the coming three years. Two months ago, the government has announced another massive housing construction project called 40/60, in which housing beneficiaries will be asked to deposit 40% the value of the house in advance with the remaining 60% expected to be covered by the government as a long term loan to be paid by the beneficiaries at later stage. Its first phase implementation, mainly registration of citizens entitled for the project, however, was hit by unexpected administrative misfit.

The Addis Ababa City administration estimated that in Addis Ababa alone it would have been necessary to build 468,668 houses between the years 2004 – 2009, which means that on the average, it would have been necessary to build more than 78, 000 houses annually. Now, a sober estimate by the same office has reduced that number to 60, 000 houses every year over the coming three years if the city hopes to meet the growing demands from its ill-sheltered or un-sheltered dwellers.  That leaves a considerable amount of city dwellers still unable to move into inhabitable housings.

A recent trend by private real estate companies is attempting to fill the gap by answering to the demands of middle to upper middle class city dwellers. However, many of them, aside from their suspicious promises, are tangled by a new and troublesome land lease policy that came into effect roughly a year and half ago.

The roads to connect the city with itself

The city got its Road and Transport Bureau only in 2003, following which an accelerated construction of roads saw the city connected with itself by ring roads and different in-city road constructions. According to Engineer Fekade Haile, Head of Ethiopia’s Roads Authority, Addis Ababa city currently has a total of 1,807 km asphalt, 1,777 km gravel and 277 km cobble stone roads. In August this year, road coverage of the city was a mere 13.7%, according to the City Roads Authority. This coverage is expected to be 20% by the year 2020.

Addis Ababa also waits for another six lane highway over the coming two years to connect it with Adama (Nazareth), 100 kms South East of Addis, and the only gateway to the nations import.

Currently, limited to a couple of thousands of taxis and a few hundred busses, in-city transport is a complete frustration for millions of dwellers moving from one destination to the other inside the city. However while the city was busy celebrating its 125th anniversary, the construction of an exciting electrified light rail transit project has gained an unprecedented speed. Covering a total length of 34.25 km North-South and East-West parts of the city, when completed it is expected to serve more than 80, 000 passengers/hr.

The poor and the rich

Unlike many other capital cities the world over, Addis Ababa has been quite a sleepy city for most of its years. Many of the things happening around it gives one an impression that the city has just woke up and is trying to put itself in order.

Celebrating its 125th year anniversary also means the city of Addis Ababa, where some three-five million Ethiopians are estimated to live in (depending on who is doing the counting), triggers a thought about the rich and poor sides of it.

As dynamic in many ways as the city of Addis is, it takes little to see the visible gap between the poor and the rich that has grown very wide over the past few years. It is an ordinary occurrence to see the rich driving expensive cars and living in segregated neighborhoods even by the standards of developed countries while the poor, confronted with a hyperinflation, struggle to get a meal a day. That makes the question of how far has Addis Ababa gone in delivering some of the basic needs to its dwellers over the past 125 years a daunting exercise.

Be that as it may, in October this year, Lonely Planet, the global travel guidebook company, has named Addis Ababa as one of the world’s best cities to visit in 2013. Interestingly its rating of the city, which it said was “evolving at a fast pace”, as the best ten cities to visit was based on culture, food, and value for money, which is not exaggerated at all. Despite its construction hustles a stop over this young city for the year 2013 may worth all the money spent.