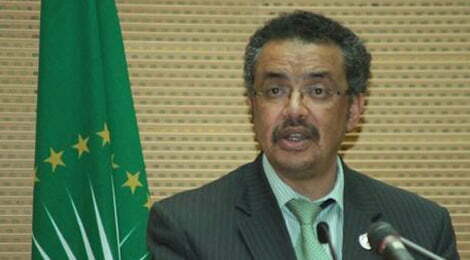 As a matter of historical coincidence, both Ethiopia’s Ministry of Health and the World Health Organization (WHO) were established in 1948. Dr. Tedros Adhanom became the former’s first unqualified but politically appointed minister in history and he now wants to take over the later, in a similar and unjustifiable trajectory.

First, it has to be established as to how such a man with all sorts of personal shortcomings, including but not limited to, professionalism, integrity, leadership quality and even humanity made atop Ethiopia’s political hierarchy. Dr. Tedros is the executive member of the TPLF, a party constituting the core of the lofty ruling coalition, EPRDF, which ruled Ethiopia for over quarter a century with an iron fist. TPLF elites hail from the minority Tigrean ethnicity in the north who played a significant role in ousting Ethiopia’s communist dictator, Derg, in 1991 only to appear yet as another version of it under the leadership of the late Meles Zenawi. By effectively annihilating the country’s capable political elites, the late Meles created an amorphous political buffer around himself where opportunist elites such as Dr. Tedros were to be welcomed. The promotion of Dr Tedros from a mere malaria desk expert at the regional health department of Tigray to the ministerial portfolio of Ethiopia in 2005 was part of this trajectory. Accordingly, the biologist-turned malaria entomologist became the first health minister with non-health background in the history of the Ethiopian state.

Following the death of his late mentor Meles Zenawi, the malaria expert even astonished the whole world by becoming, all of a sudden, the minister of foreign affairs in a country home to some of the most experienced career diplomats. In a nutshell, both his shortcomings in professional competence and the typically opportunist twists of the political pathway for his ascendancy to power proves the modes operandi of his party TPLF and how such people like him benefited from that.

It’s true that under his tenure as a minister of health, there were some progresses registered in the country’s health sector. But, the narrative that Ethiopia registered miracles, as even wrongly propagated by few western media, should be filtered so carefully. Ethiopia’s health sector is still categorized by the WHO itself among those “in critical crisis”. Nevertheless, because of the politically motivated decisions made by the regime to crackdown on international NGOs working on human rights (especially after the 2005 elections fallout) thereby channeling some huge international funds only into the health sector, there were progresses made during his tenure as a health minister. This is particularly true in the areas of health facilities expansion and the globally politicized care involving maternity and child health. But below, I outline examples of Dr. Tedros’ grim failures even in these allegedly modest gains.

Corruption: As huge international funds pumped by NGOs & philanthropists to strengthen Ethiopia’s health sector, mismanagement of funds and corruption were the hallmark of Dr. Tedros’ tenure as a minister of health between 2005-2012. This was brought to public attention as some media went on meticulously reporting it. Even the US government was obliged to cut funds for HIV/AIDS by 79% because of such financial mismanagement and corruption.

Inequality in health: Ethiopia has been praised for its achievements in the areas of maternity and child health. While there could exist some elements of truth in this intentionally hyped story, taking it as such would amount to a gross distortion of the country’s reality. In fact, the progresses made were achieved only for the wealthier class in the health quintiles. According to the latest report by the “Count Down” project, a US-funded project established in 2005 with the aim of assisting countries to generate and utilize empirical evidences in order to track progress towards health-related MDGs – particularly in areas of Reproductive, Maternal, Newborn and Child Health (RMNCH) – the disparity across wealth quintiles – between the poorest 20% and the richest 20% of the population – is extremely high in several indicators. For instance, the under-5 mortality rate, though declined overall, has actually increased among the poorest 20% of the population, from 130 in 2005 to 137 per 1,000 in 2011. Disparities in coverage also remain large across Ethiopia’s administrative regions, and between residents of urban and rural areas. According to this report, not only in remote regions like Afar and Somali, but also in the largest & central region of Oromia, from where 60% of Ethiopia’s GDP comes, a significant majority receive two or less out of eight essential RMNCH interventions; while in Addis Abeba & Dr. Tedros’ homeland of Tigray in the remote north, a vast majority of children receive at least six out of the eight.

Politicization of health: Dr. Tedros left the Ethiopian health sector very much politicized and crippled, which has to be yet depoliticized if it has to function properly. The more than 35,000 female health extension workers trained for six months and deployed across Ethiopia during his tenure, which many praise him for, are more of political cadres who are deployed in rural household families to serve the TPLF than helping health workers. This has been verified by their own internal memos and reports on various occasions.

In addition to these, under Dr. Tedros’ tenure, Ethiopia experienced outbreaks of many rudimentary diseases, like the cholera outbreak in 2006, 2008 and 2011 among others. Even though the Ethiopian law stipulates cholera to be a “mandatory notifiable disease”, Dr. Tedros left the legacy of keeping disease outbreaks “secrete”. Today that legacy remains as cholera ravages the whole country including the capital Addis Abeba.

In my view, Dr. Tedros doesn’t deserve to represent the face of such a prestigious global organization as the WHO, which is much regarded as an utmost humane. Ethiopia has many talents and capable leaders both in the health sector and beyond to offer to the WHO if professional competence, integrity and leadership quality are to be considered. Dr. Tedros Adhanom is not one of them.