Addis Abeba, March 03/2017 – Despite a six month nationwide state of emergency declared in Oct. 2016 and was hoped to restore a military style law and order throughout the country, weeks-long cross border incursions by armed militiamen into many localities in eastern and southern part of Oromia, (bordering the Ethiopian Somali regional state, in east and south east Ethiopia) have left more than 100 people dead and the destruction of unknown amount of properties, a local resident said in a phone interview with Addis Standard.

According to Abdurrahman Dubaa, a resident of Chinaksan town in east Hararghe, some 630km east of the capital Addis Abeba, many of the militiamen conducting cross border raids in various localities, including Chinaksan, Babile, Gursum and several other villages, are members of the Liyu Police, a special paramilitary force set up by the Somali regional state with the help of the federal government to counter rebel groups operating in the restive Ogaden region in eastern Ethiopia, and are stationed in and around Ethiopia’s Somali regional state.

The border incursions have also affected areas in West Hararghe especially Bordede woreda, “where more than 30 civilians were killed overnight on Wed. Feb 22,” according to Abdurrahman. In south east of Ethiopia, some 450 km off the capital Addis Abeba, similar incidents have occurred in Bale zone in Swena, Meda Wolabu and Dawe Serer woredas, among others; as well as in Liben and Gumii Edelo woredas in Guji Zone of the Oromia regional state in southern Ethiopia. Abdurrahman further said that the number of people killed so far in various places in the last two weeks only was well “over 100.” 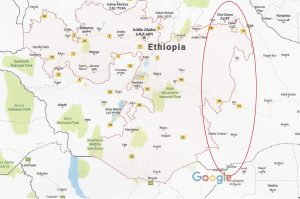 The second reason is economic, according to Addisu. “After attacking the areas, these armed militiamen engage in looting of properties.” He further admitted that “lives were lost” in the last two months, but fail short of mentioning the exact number. He also fail short of identifying who exactly these armed militiaman were. However, he cautioned that the incidents have nothing to do with the people of both regions and the regional governments, adding, both the Oromia and the Ethiopian Somali regional governments were trying to “solve the matter peacefully”. Members of the command post tasked to implement the state of emergency were called to intervene in some areas, according to Addisu.

When asked by Addis Standard if the presence of members of the command post was helping to contain these deadly border incursions, Abdurrahman simply said, “[they are] becoming part of the problem than the solution.” Abdurrahman claimed there were several incidents where members of the command post have fired at civilians, a claim Addis Standard could not corroborate due to lack of sources willing to come forth.

In a statement sent to Addis Standard, an organization called Human Rights League of the Horn of Africa, said, in the past six months “hundreds of Ethiopian Somali Liyu Police…have entered into Oromia villages, attacked and killed and abducted hundreds of Oromos and looted properties; over 750 goats, sheep, and camels were taken.” The organization claims the number of people killed in recent skirmishes is more than 200.

On Thursday March 02, during a televised meeting of Caffee Oromia, the region’s parliament, which was chaired by Lemma Megerssa, president of the region, several members of the parliament were seen voicing their frustrations in what they indisputably asserted were the “violence and killings perpetrated” by the Liyu Police, but also by members of the federal police force, on several villages bordering the two regions. “

Perpetual
In addition to being one of food insecurity prone areas, the boundary between the two neighboring regional states has been a hotly contested affair both before and after the Oct. 2004 border referendum, which was held to determine the residents’ choice for administrative status of border kebeles.

The referendum was conducted in 420 Kebeles located in 12 different Woredas across five zones of the Somali Regional state. Official results of the referendum say residents in close to 80% of the disputed areas have voted to be under the administration of the Oromia regional state. Addisu Arega Kitessa asserts the result of the referendum are “final” and will not be altered. But claims alleging voting irregularities persist. And subsequent ethnic conflicts have led to the displacement in late 2004 and early 2005 of more than 80,000 people on both sides.

It is in the backdrop of this that the Somali regional state special force, known in Amharic as Liyu Police, was formed in 2007. The presence of this special force, established to counter threats from the secessionist Ogaden National Liberation Front (ONLF) is often associated with several accounts of abuse against both ethnic Somalis thought to support ONLF and the Oromos by holding cross border raids for the purpose of territorial expansion and resource looting.

A report in May 2012 by the Human Rights Watch (HRW) accused the special force of “summarily” executing 10 men “during a March 2012 operation in Ethiopia’s eastern Somali region.” “The Liyu police have been implicated in numerous serious abuses against civilians throughout the Somali region in the context of counterinsurgency operations,” it says.

“The purpose of Liyu Police is double edged,” says a professor of political science at the Addis Abeba University (AAU) who wants to remain anonymous. “It serves both as the savior of the regional state from ONLF’s encroachment and the safeguard of territorial expansion of the Somali regional state into the Oromia regional state across the border between the two regions. The Liyu police serves both these purposes with an extreme sense of impunity,” the professor said.

Although officials of the Somali regional state claim that the Liyu Police was established in “accordance [with] police proclamation that emanate from the national constitution of the Federal Democratic Republic of Ethiopia (FDRE),” the exact legal and constitutional status of the force remains a perplexing enigma.

Commenting on his Facebook page on Sunday Feb 26, a pro-government blogger and editor at Horn Affairs, Daniel Berhane, said, “The Somali regional state should be told in clear language that it should refrain from its irresponsible acts. To this end, the federal government should discharge its responsibilities.” According to Daniel, although several factors determine the recent clashes, “it is clear that there were disproportional use of force by the Liyu Police in several areas.”

Back in Chinaksan, residents have once again took to the streets last week and have blocked roads “to prevent the Liyu police from coming in,” Abdurrahman Dubaa said. As of Monday this week, federal forces enforcing the current state of emergency have taken control of the city’s security and are “searching homes of residents, detaining young people and taking them to unknown locations,” he said.

What triggered the latest incursions is not clear, and so far, there has been no statement both from the federal government and the Somali regional state. AS

Cover photo: Undated photo of members of the Liyu Police in thier military fatigue