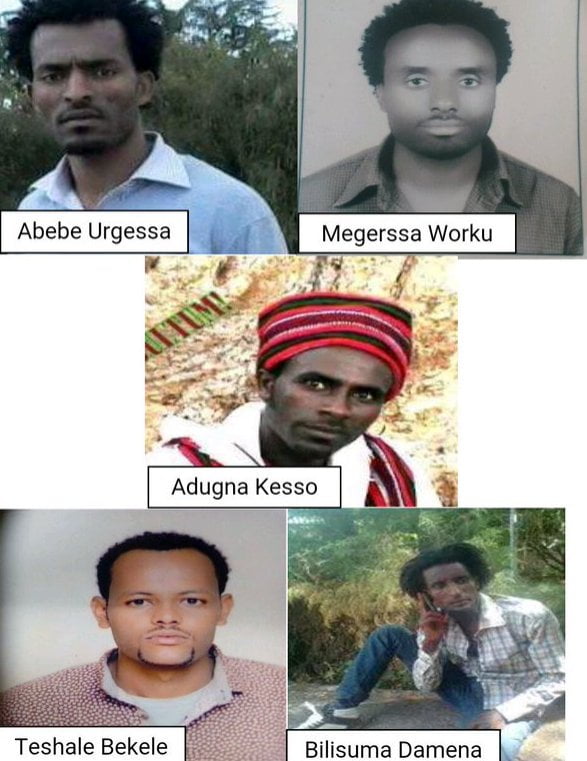 Addis Abeba Nov. 18/2016 – The Federal High court 19th criminal bench has yesterday sentenced three of the five university students, who were arrested in April-May 2014 during the first #OromoProtests, to various terms in jail.

Six university students from various universities located in Oromia regional state were among the hundreds of students arrested during the April-May 2014 Oromo students protests against the now shelved Addis Abeba Integrated Master Plan. They were subsequently charged with violating various articles in Ethiopia’s sweeping Anti-Terrorism Proclamation (ATP). One of the six, Lenjissa Alemayehu, a third-year water engineering student at Jimma University, was acquitted by the court during the early days of the trial, although he has been in and out of prison since. The remaining five were charged for having connections with the outlawed Oromo Liberation Front (OLF), and for inciting violence during the students’ protests.

In December 2015, the federal high court 19th criminal bench found all the five guilty of the charges against them. Accordingly, the first defendant, Abebe Urgessa, was found guilty of being behind the May 2014 football stadium explosion that went off at Haromaya University, in eastern Ethiopia, killing one and injuring over 40. However, during the last two trials last week and this week, prison police have failed to bring Abebe from Showa Robit prison, some 200k northeast of Addis Abeba. The court adjourned the sentencing of Abebe until November 28th next week.

During yesterday’s hearing, the court sentenced the 3rd and 4th defendants Adugna Kesso and Billisuma Damana to four years and five months each. The 2nd defendant Megersa Worku was recently acquitted of all charges against him, while the fifth defendant Teshale Bekele was sentenced to one year and two months, a time he already served in excess.

It is understood that the students can appeal the sentencing. AS