Addis Abeba, December 15/2017 – September 2017, the start of the Ethiopian New Year of 2010, had a devastating beginning, the level of which was previously unseen for at least two and a half decades. More than half a million innocent Ethiopians (mostly from the ethnic Oromo background – and to a smaller extent Ethiopian Somalis) were brutally uprooted from their homes and their ways of lives. Only a few weeks before September  they all called the villages and towns bordering the Ethio-Somali and Oromia  regions – in eastern, southern and south eastern part of the country – a home for decades. 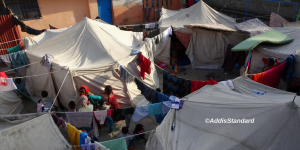 This is what they now have as “home” away from home

Their displacement didn’t come alone; hundreds of men and women were killed in the process; women and girls were raped; and children were separated from their families. This violence has since long been a military violence more than an “ethnic clash” that the international media were busy calling it.  It was all laid bare for the world to see in just few weeks.

But laid bare as it were, for the following months since, Addis Abeba, the capital and the center of the federal government’s power, remained as far removed emotionally as it is physically, save for few exceptions. The Oromia regional government’s effort to raise money via an SMS campaign using the country’s telecom monopoly was quickly put off , perplexing the authorities of the regional government and Ethiopians willing to support the effort. But Addis can no longer remain unaffected as more than 2,000 families of who are the victims have made the perilous journey to seek for shelter and safety are now camped inside the Rift Valley university premises located in Nifas Silk Lafto Sub-city, at the heart of the city. They are being sheltered and fed by Dinku Deyas, the owner of the university and volunteers. 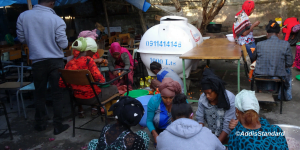 Taking care of one another. A group of women cooking for a camp full of internally displaced fellows

This are their stories…

“I was celebrating the New Year with my family when suddenly some members of the Liyu Police broke in to our house,”  Deyasa Dengeya, who used to a businessman in the town of Jigjiga, the capital of the Ethio-Somali region, for the last 18 year told Addis Standard. He estimated his capital to be around 3.8 million Birr. “I couldn’t save anything else but my wife and four kids; we left right away, but I wasn’t able to save my kids from the trauma they had to go through.  We managed to reach to the military personnel who were around there but they told us that they couldn’t interfere as they don’t have any order.”

At the university’s compound , businessmen and women and different professionals such as teachers, doctors, engineers and more than 30 university lecturers are temporarily sheltered, as was recounted by a Jigjiga university lecturer who didn’t want to tell us his name, not his story. He escaped the attack by hiding in a toilet for five days.

Another woman, who also wanted to remain anonymous, says hat organizations such as the UNICEF and UNHCR had had their workers, whose ethnic backgrounds were Oromo, leave the area for fear that it was beyond their capacity to stay safe and didn’t want to take the risk. “My husband, who was an employee of Save the Environment Ethiopia, survived the attack and death because I locked him in the house,” she said, adding that although the organizations are now calling their employees back to their works places no one wants to go back as they don’t have a guarantee for their safety.

Among those who are now sheltered in Rift Valley University Gerji premises are those, a few years ago, used to live in the outskirts of Addis Abeba but were displaced due to the city expansion projects. Birhanu Girma is one of the people who left Addis Abeba to settle in Jigjiga because his home located in Yeka Sub-city Kotebe area was demolished for a development reason. Displacements has haunted him back. 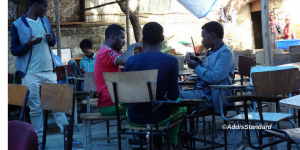 Men like Dereje Getachew, who were once a productive part of their society, are now sitting jobless, playing cards

The story of Dereje Getachew, a father of two who owned an electronics business for the last two years, is no different. “I never thought this would happen when I started my business there. I even created some job opportunities for the locals but now I’m looking for help myself,” he told Addis Standard.

A committee of misery

Zenebe Degefew is a member of the refugees’ committee formed inside the university shelter. According to him, the committee has reached out tothe Addis Abeba city administration and the surrounding towns requesting for a permanent resettlement. They are waiting for a response, hoping all the same that their please would fall into compassionate ears. But he fears all the same that the mass killings they have seen, the disappearance of families and the large number of rape victims, (seven of those are still getting medical treatment in Sebeta town), is more than what can be compensated.

“There was this bride we have seen, they raped her on her wedding day and killed her groom right in front of her. She then took her dead groom to a place called Gara Muleta, which later became another reason for a rally in Awoday and the surrounding,” a brokenhearted Zenebe told Addis Standard.

There are currently more than 2,000 families living at this temporary camp since they first began arriving on September 22, 2010. “We have been getting supports only from volunteers since the first day we came here and we didn’t receive any meaningful support from the concerned government body,” say other members of the committee who were interviewed by Addis Standard. The lack compassion, political and material support to the victims from the federal government has been a point the authorities of the Oromia regional states have been unhappy about and have stated criticized publicly time and again. 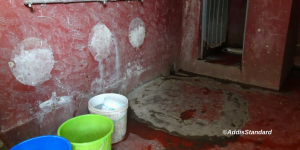 Lack of Hygiene is the next horror awaiting them all

Those who escaped alive and are now sheltered in the university campus are in tern haunted by lack of access to hygiene, including clean living areas, kitchen and toilets, as well as access to medical care, which could have easily been met if the federal government showed the will, according to Ebisa Tamene, a nurse by training who is working in the temporary clinic center at the camp. Ebisa is deeply worried about the dangerous possibilities of an outbreak of a disease or two. According to him, one person was recently infected by skin rash, which immediately transmitted to some 20 other people; “luckily we managed to control it. But if an outbreak such as cholera happens here, I’m afraid it’ll even spread rapidly to the local communities outside the camp,” Ebisa told Addis Standard. 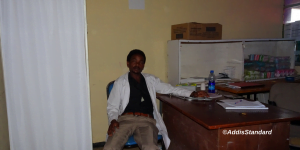 Ebisa sits in this temporary clinic, unable to provide what a clinic is supposed to provide

Ebisa and his colleagues are themselves victims who escaped alive from Chelenko, a scene of another atrocity last Monday. They are now volunteering to take care of their victim friends and camp neighbors. “The Addis Abeba City Administration Health Office has promised to give us an ambulance and free medical treatment at Zewuditu Hospital, but we haven’t seen any of it so far and the refugees are paying half of their medical cost by themselves,” he added.

The refugees are currently being asked to go return to the towns and villages they have left behind. But according to the committee members many are saying they will never go back unless they first see justice served for the wrong done to them. AS

All Photos by Henock Keber/AddisStandard