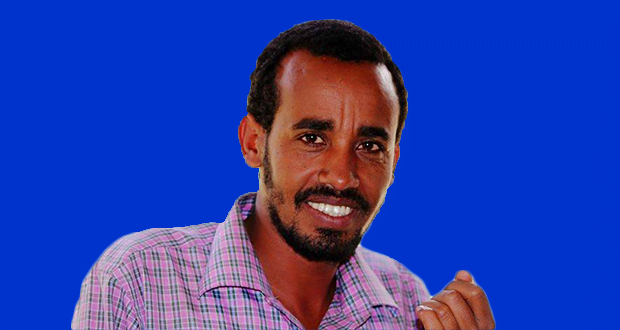 News: Ethiopia editor-in-chief sentenced for a year and half in prison, time he already served

Addis Abeba, May 26/2017 – In what came as a big moment of relief to family and friends,  despite it being a further blow to freedom of the press in Ethiopia, the federal high Court 19th criminal bench has this morning sentenced Journalist Getachew Shiferaw editor-in-chief of a local Amharic newspaper Negere-Ethiopia, established by the opposition Semayawi (Blue) Party to one year and six months in jail, a time period he has  already served since his first arrest on December 25, 2015.

Accordingly, Getachew is expected to be freed  as of the court’s ruling this morning because he will be entitled to four months of good time credit per one year of his incarceration.

The court found Getachew guilty of violating article 257 A and D of the Ethiopian penal code under “Provocation and Preparation” to “publicly provoke [offenses mentioned under articles 238-242, 2465-252 of the penal code] by word of mouth, images or writing (A)”, and “enter into relations or establish secrete communication with a foreign government, political party, organization or agent (D)”. The offenses referenced under articles 238-242, 2465-252 include, among others, “outrage against the constitution, or the constitutional order (Art 238)”, and “attack on the political or territorial integrity of the state (Art 241).”

Getachew was detained during the time anti-government protests were sweeping throughout the Oromia regional state. He was subsequently subjected to several abuses including a pre-trial detention when he was kept incommunicado at the nation’s infamous decades old prison ward, Mae’kelawi, located in the capital Addis Abeba.  He was initially charged with article 7/1 the much criticized anti-terrorism proclamation (ATP).

After several hearings and insufficient witness testimonials, the charges were downgraded to the criminal charges he is now sentenced for. The bases for the criminal charges, according to the prosecutor, were Getachew’s Facebook posts, in which he “endorsed” and “supported” an incident in which Abebe Gellaw, an exiled Ethiopian journalist himself convicted of terrorism charges at home, heckled the late Prime Minister Melse Zenawi at an international agricultural symposium shortly before he died.

In January this year, the court denied him bail following prosecutor’s appeal that he would leave the country if he was set out on bail.

The following trial procedures were marred by several inconsistencies and upsetting delays as prosecutors were reluctant to bring the transcript of the statement he gave to the police while he was in Ma’ekelawi. In March this year, he objected to a guilty plea bargain and defiantly spoke at the court that he was a “journalist, not a criminal”. “I will not enter a plea bargain, I have committed no offense.” Eventually prosecutors have brought to the court his statement of confession, a statement several former detainees say is often obtained under duress, which were taken as key factor to sentence him to jail.

Getachew’s guilty verdict on May 24 has caused condemnations from the Committee to protect Journalists (CPJ)  and Amnesty International (AI) .

“That prosecutors struggle to find a charge to levy against Getachew Shiferaw shows that Ethiopian authorities are desperate to lock journalists away and makes a mockery of this conviction,” said CPJ Africa Program Coordinator Angela Quintal. And Muthoni Wanyeki, Amnesty International’s Regional Director for East Africa, the Horn and the Great Lakes said: “Today’s groundless ruling is a further slap in the face for justice in Ethiopia and proof of the authorities’ continued willingness – despite its stated commitment to reform – to misuse the criminal justice system to silence dissent.”

Getachew’s sentencing brings the number of Ethiopian journalists sentenced to jail only within the last five months to three. In January 2017, Kalid Mohammed Ahmed, 26, and Darsema Sori Banqash, 48, journalists at Radio Bilal, were jailed for terrorism related offenses; and yesterday, a federal court sentenced former Blue Party spokesperson Yonatan Tesfaye to six years and six months for his Facebook posts that prosecutors alleged were “inciting violence”

Getachew Shiferaw was a former employee of the state’s Information Network Security Agency (INSA). AS

Internet as utility, not luxury