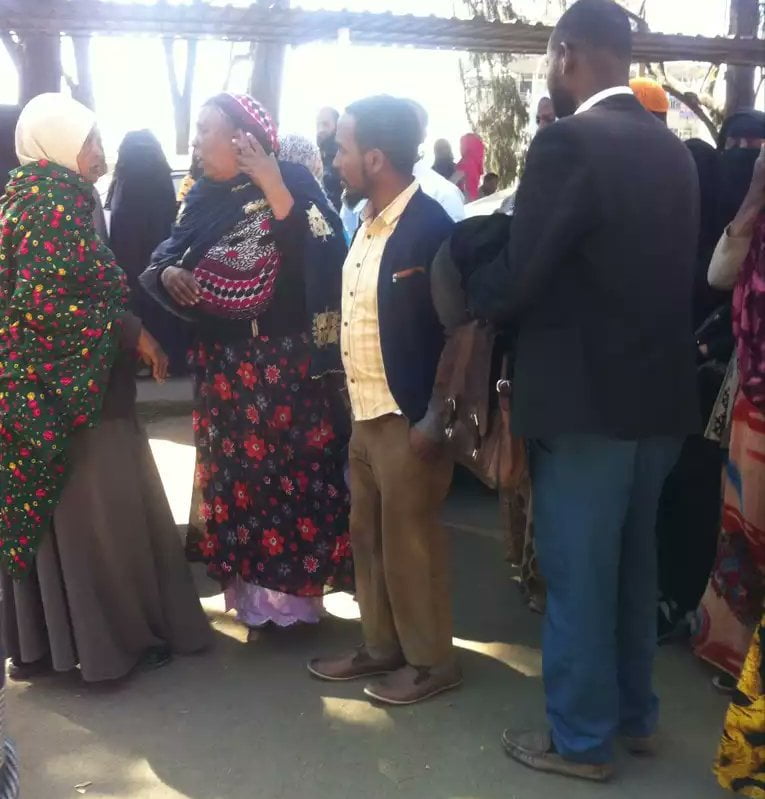 Journalist Darsema Sori Banqash is sentenced to four years and five months as he is suffering from tuberculosis; four of the 20 are among the 38 inmates facing a separate charge suspected of burning Qilinto prison

Addis Abeba Jan. 03/2017– The federal High Court 19th criminal bench has today sentenced19 defendants under the file name of the first defendant Kedir Moahmmed Yusuf to five years a six months each while one defendant in the same file was sentenced to four years and five months. On Dec. 21 2016 the federal court found all the 20 defendants guilty of terrorism related charges and violating the country’s penal code.

Two of the accused: Kalid Mohammed Ahmed, 26, and Darsema Sori Banqash, 48, are journalists at Radio Bilal. Darsema Sori Banqash is the one who is sentenced to four years and five months because he is suffering from tuberculosis, according to the court’s ruling.

The accused have shouted the slogan ‘Dimtsachin Yisema (Let our voices be heard) upon the court’s reading of the sentences. The court premise was crowded with family and friends of the accused who were seen reacting with anger and despair against the court’s ruling. The Police from the city administration have quickly disbursed the families.

Their lawyer, Mustafa Sefi Suleman, told Addis Standard that the ruling was unjust as the accused were merely exercising their constitutionally guaranteed rights of freedom of expression.

Four of the 20 defendants: Ibrahim Kemer, Fitsum Chernet, Sheha Sudin Nesredin and Usman Abdu, are among the 38 inmates facing a separate charge suspected of setting the controversial fire that gutted the maximum security Qilinto prison.

They were initially accused of conspiring and entering into an agreement to coerce the government to release 18 members of the Ethiopian Muslim arbitration committee, from custody where they were being tried for terrorism related offenses. However, the charges have grown to include accusations of, among others, “organizing and communicating, including via telephone, to recruit members to incite violence and participating with terrorist organizations.”

Although the 18 members of the Ethiopian Muslim arbitration committee were jailed to lengthy terms of varying periods, the 20 individuals, including two journalists: Kalid Mohammed Ahmed, 26, and Darsema Sori Banqash, 48, from Radio Bilal, who were accused of coercing the state to release the 18, remained jailed.

However, prosecutors have continued pressing the charges against the 20 defendants. They are now found guilty by the federal high court this morning.

The trial over the last two years of Abubeker Ahmed and the remaining 19 has been marked by several irregularities including inconsistent witness statements and complaints by the defendants of having had no access to their lawyers and having been subjected to torture and duress.

Many of the arrested were the Ethiopian Muslim arbitration committee members who volunteered to become members in order to seek solutions to narrow the widening gap between Muslims and the government.

The three outstanding differences the Ethiopian Muslim arbitration committee, simply known as “The Committee”, were trying to resolve were the demand by Muslims for the restoration of the Awoliya College and Secondary School administration which was sacked by the government in Dec. 2011; a free election without the interference of the government to replace members of the Islamic Supreme Council (Mejlis), again sacked by the government; and an end to the government’s attempt to publish and distribute books which carry a new Islamic teaching called Al-Habesh. The government denied its hands were on all the three demands but claimed Awoliya College and Secondary School, a highly regarded Islamic school based in Addis Abeba, had become a breeding ground for radicalism and Wahabia. 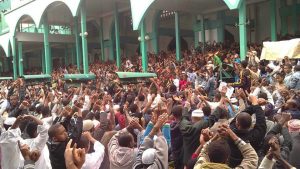 The incident triggered one of the most disciplined and sustained Friday sit-in protests by hundreds of thousands of Muslim protestors here in Addis Abeba and other major towns throughout the country that lasted for more than four years. it also gave birth to a famous online activism on twitter and facebook by an underground group called ‘Dimtsachin Yisema’ (let our voices be heard) which has attracted the participation of thousands who campaigned for the release of the committee members and others arbitrarily detained during sit-in protests. However, the Friday-sit-in protests were often met by the presence of large numbers of police forces who at many occasions have clashed with protestors which led to polices’ brutal use of force.

The three years trial of the Ethiopian Muslim arbitration committee members until they were jailed in August 2015 hasn’t been without tense moments too. Most importantly, the judicial independence was believed to have been tarnished when a state sponsored documentary called “Jihadawi Harekat” was aired by the national television soon after the trial began. Legal experts believe the incriminating contents of the documentary had severely affected the independence of the judiciary, which struggles to maintain its distance from political pressures, often in vain.

In Mid December 2016, a radio station called Radio Daandii Haqaa released a new documentary called “The Movement” chronicling the story of Ethiopian Muslims and their struggle since 2011. AS

Cover photo: Families of the accused at the court premises today received the news with anger and despair

Memoirs of my detention at Awash 7: tales of indoctrination, of laughter and the unknown