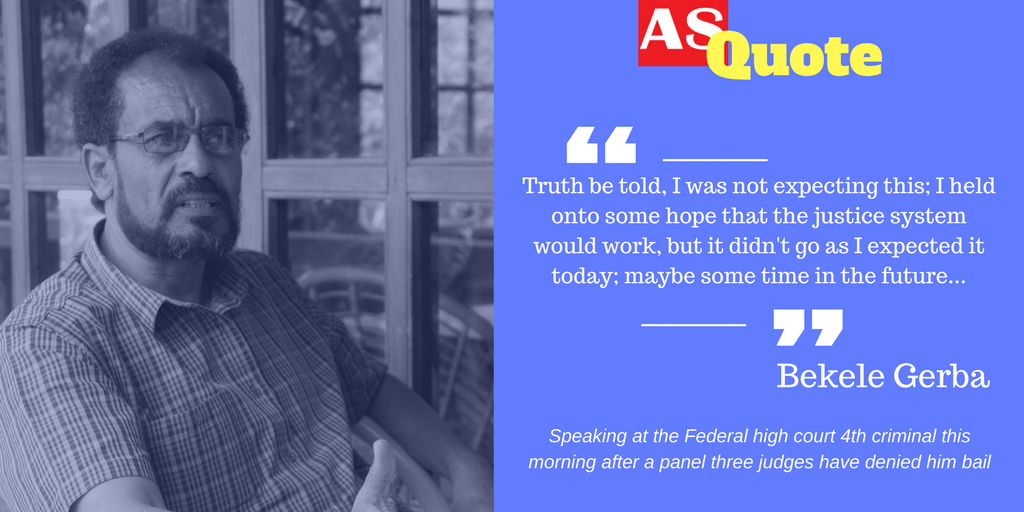 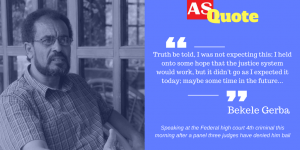 The decision came after the judges have failed to respond during the previous four trials that followed the court’s July 13 decision to reduce the terrorism charges against Bekele Gerba to criminal charges.

In today’s hearing the judges have said that they accepted prosecutor’s argument that if released Bekele would get “involved in acts of inciting violence.”

The decision was unexpected to many in the court compound and to Bekele himself. “Truth be told, I was not expecting this; I held onto some hope that the justice system would work but it didn’t go as I expected it today; maybe some time in the future…” a calm and composed Bekele said upon hearing the verdict.

On July 13, the court ruled that Bekele Gerba, who was first detained in December 2015 shortly after the start of the popular Oromo Protests, should defend not the terrorism charges he was originally accused of, but article 257/A of the 2004 Criminal Code.

Under the reduced charges Bekele Gerba faces accusations of “Violence against the national state”, which includes, among others, “outrage against the constitution, obstruction of the exercise of constitutional powers, and armed rising and civil war.”

Bekele Gerba was  charged in April 2016 along with 21 defendants that included defendants Dejene Fita Geleta, Secretary General of OFC, and Gurmesa Ayano, another senior member, with various articles of the ATP. The charges included, but not limited to, alleged membership of the banned Oromo Liberation Front (OLF), public incitement, encouraging violence, as well as causing the death of innocent civilians and property destructions in cities such as Ambo and Adama, 120km west and 100km east of Addis Abeba, during the recent Oromo protests in Ethiopia.