Addis Abeba, June 24/2020 – Yoweri Museveni in his book “What is Africa’s problem?” observes that the longer presidents stay in power, the more difficult it gets to remove them democratically. There is no better example for the validity of his observation than himself. He has made it difficult to remove him democratically for more than three decades.

What makes the struggle for democracy difficult in Africa is mainly the absence of a genuine commitment for it from the political elite. Democracy has become a justification for incumbents to remain in office through their flawed elections and an organizing principle for state capture by their opponents. And the tendency and propensity toward corruption among those in government and their affiliates in business and the similar drive to exit among those marginal to these systems have weakened the legitimacy of many of the states and governments in Africa.[1]

Ethiopia is not an exception to this African story. Now, it is almost half a century since the entrance of the term democracy into the nomenclature of the Ethiopian state. Many would agree with me that the Ethiopian state is anything but democratic.

I suspect the depressing state of democracy in Ethiopia has led Mohammed Girma to note that “the word “democratic” [in the republic] means nothing.” I was intrigued by his piece and it is in the spirit of extending Mohammed’s conversation that I am writing this.

Mohammed believes that the lack of meaning to “democracy” both as a category of practice and analysis may be related to its “foreign roots”. And the diagnosis he gives is adapting democracy with the indigenous virtues. I agree with Mohammed that Ethiopia should contextualize democracy to serve the needs and interests of its people and there are several options for democratic innovation and contextualization.

I argue that it is not the “foreign roots” of democracy or the lack of adaptation that makes the word “democratic” in the republic a mockery, but a lack of genuine commitment from the political elite to democracy. It is the political elite’s inability or unwillingness to understand how democracy can be more powerful than authoritarianism to protect its long-term political interests that put the country in a vicious circle of political crises.[2]

As the indigenization of democracy is the main theme of Mohammed, I will closely examine this drawing from the experiences of other African countries and recent Ethiopian initiatives. Along the way, I will also highlight the difficulties that may arise in the practical translation of Mohammed’s call.

Soon after independence, many African scholars, including leaders, echo Mohammed’s idea of indigenizing democracy in their quest for searching an alternative to liberal democracy that is best suited to Africa.[3]

They posited that democracy is a hurdle for development, social transformation, and nation-building in addition to its alien origin and nature to the African experience. It was contended that an African theory of government should accelerate development, enable government, and bestow on the state the power and resources it needs to defeat “African real enemies – ignorance, poverty and diseases, ” also a familiar message we often hear in Ethiopia.[6]

Based on these cultural justifications, they replaced multiparty democracy by one-party systems, and they established personal rule or “Big Man Rule” by dismantling the institutions of separation of powers and checks and balances.  Such changes were rationalized based on the alleged existence of an African system of government that favors consensus and cooperation over competition, the unity of power than its division, and the centrality of a unifying personality in the exercise of political power and authority.[7]

However, the practice of one-party systems and Big Man Rule neither brought economic development and built a unified nation nor did it confer the much-needed legitimacy to the states and governments. The primacy of personal patronage, loyalty, and dependence around the presidency over constitutional rules and laws for opportunities in politics and in business drained these states’ hope for development and progress. These states became captives to their new presidents and their cronies and ready for capture by their opponents when circumstances permitted.

As these states were held hostage by their political elites, the military was invited by the prevailing circumstances or invited itself into the realm of politics by transforming its role from protecting the territorial integrity of these states to cleanse them from “incorrigible politicians.”[8] With the exception of few states where one-party autocracies survived, from the late 1960s up to the end of the 1980s, the military took over power from the civilian regimes in many of the African states. There were 80 successful coups, 108 failed attempts, and 139 reported plots in 48 African states between 1956-2001.[9] The ultimate objective of the military leaders was to institutionalize their personal powers under a theory of unlimited government like their civilian predecessors.

It is the general distaste, protest, and struggle against authoritarianism and dictatorship by the people at home and the triumph of liberal democracy abroad with the end of the Cold War that coerced African leaders to reaffirm and accept liberal democracy in the 1990s. Even after three decades of a flawed democrat experiment, a 2016 Afrobarometer survey that included 36 African states shows that the majority of the people in these states want democracy.[10]And I think Ethiopians will not be any different from their African sisters and brothers.

Indigenization of democracy by whom and how?

The power of the people rests on democracy that creates necessary, if not sufficient, conditions for choice, participation, and representation even in the indigenization of democracy itself.

From the experience of other African countries, the intellectuals and the political elite were the drivers of the indigenization of democracy. The result was clearly self-serving. The general public would have benefited more under a democracy rather than under Authenticité, African socialism, Harambe, or some of their variants. And the people paid a huge price for the return of democracy, even if flawed, in the 1990s and still pays a huge price for a true democracy.

Medemer as an example of indigenizing democracy in Ethiopia

Prime Minister Dr. Abiy Ahmed, I think, already set the tone for the Ethiopianization of democracy within the framework of Medemer.

He seems to follow the paths of Kwame Nkrumah, Julius Nyerere, and other African founding fathers in domesticating democracy. For instance, consider the blurb of his book Medemer, he “advocates for a fresh, Ethiopian-centric approach to the country’s politics, citing the past half-century when previous administrations applied successful ideologies and theories from outside of Ethiopia that failed, being alien to Ethiopian problems and realities. Abiy calls for reversing the trend of importing ideologies for a renewed Ethiopian political ideology that emanates from Ethiopia’s social-political context and taps into the country’s historical and cultural values.”

Medemer draws or claims to draw from the rich Ethiopian cultural systems, and hence the Prime Minister already articulates this “Ethiopian democracy” and makes it the guiding ideology of the Prosperity Party and by extension to the current Ethiopian government and the state. While Abiy Ahmed’s Medemer can be transformative like Julius Nyerere’s Ujamma, it may also be destructive as Kwame Nkrumah’s African socialism or Jomo Kenyatta’s Harambee.

Yet, in as much as Medemer has many supporters, it has also fierce opponents. Only through democracy can the supporters and opponents of Medemer resolve their differences in a peaceful, acceptable, and durable manner. This is why free, fair, periodic, and democratic elections are necessary to Ethiopia. And this is also illustrative of how the indigenization of democracy, whatever form it takes, cannot diagnose the democratic deficit in Ethiopia.

Also, let’s not forget that we are talking about Ethiopia where the political elite, not the people, hold diametrically opposed views about the historical trajectory of the country ranging from a history of nation-building to colonial domination to national oppression. In light of such a contested account of history, democracy is really the minimum core and the trusted virtue for all Ethiopians to even indigenize democracy.

Why the absence of a genuine commitment to democracy from the political elite is the main hurdle for Ethiopia’s democratization?

Therefore, the word “democratic” in the republic is a mockery not because of its “foreign roots”, but because of the absence of a genuine commitment to democracy from the political elite. Democracy works when the political elite makes painful political compromises, and these are reflected in the country’s constitution. The military regime (Derg) and the Ethiopian People’s Revolutionary Democracy Front (EPRDF) did not make such compromises. They simply nationalized and constitutionalized their political ideologies and programs. Unless the Prosperity Party breaks this vicious circle, the trend continues.

The truth of the matter is a sustainable political system rests on having a legitimate constitution that speaks to the hearts and minds of the people, and that eliminates the tendency and propensity toward corruption among those in government and their affiliates in business and the similar drive to exit among those marginal to these systems.

Editor’s Note: Berihun Adugna Gebeye (S.J.D.) is a Postdoctoral Research Fellow at the University of Göttingen and a Visiting Scholar at the Max Planck Institute for the Study of Religious and Ethnic Diversity. He can be reached at
Gebeye_Berihun@alumni.ceu.edu

[2] See Stephen Holmes, Passions and Constraint: On the Theory of Liberal Democracy (The University of Chicago Press 1995).

Analysis: Egypt’s GERD complaint to the Security Council and its flawed legal arguments 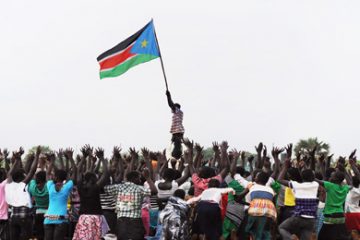