The five-star Sheraton Addis Hotel, known for hosting high-level events, usually reserves its biggest ballroom, named after Ethiopia’s rock-hewn churches of Lalibela, for big gatherings. The ballroom has a capacity of accommodating more than 1,000 people on occasions such as cocktail receptions. The organizers of Girma Yifrashewa’s piano concert, held on 16 June 2016, have therefore picked no other venue than this spacious ballroom.

Organizing a concert in such a luxurious venue, in a country like Ethiopia, which favors contemporary and pop music than classical and piano pieces, takes a courageous decision. And it would not be odd, judging from the eye-watering ticket price (nearly US$50), to assume a low turnout of the event. But even as the doors opened after an hour’s delay, seats were taken in no time. If any reminder is needed, the star of the night was Girma Yifrashewa, the acclaimed Ethiopian classical pianist who is as much treasured abroad as he in his motherland.

When Girma finished his first solo performance, followed by Polish composer and pianist Frédéric Chopin, concertgoers who jam-packed the ballroom gave a standing ovation in unison. Some remained standing for the two and a half hours to come.

It was exactly to allure such audiences that the organizers paid close attention to details starting from choosing a well-versed Master of Ceremony to the stage arrangement and a giant background billboard design, which portrayed Girma and his piano.

The concert began after a marathon of speeches delivered by dignitaries and Ambassadors. The stage was then all Girma’s. The first part of the concert saw Girma’s composition, “My Strong Will”, played by a group of five Yared Music School instructors. Girma also played solo two pieces, including his own arrangement, “Hope”, from his 2014 album “Love and Peace”.

First released by a reputable record label, Unseen Worlds,“Love and Peace” was one of the three albums included in his trilogy CD collection distributed as a complimentary gift to the attendees of the concert. The collection bears his concert theme, ‘Bridging Cultures’, a tribute to the theme of the concert, which has, indeed, superbly signified bridging the western classical music tradition with that of the Ethiopian melodies. 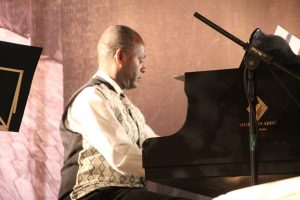 Girma’s night was flavored by the company of four Czech musicians from a premier chamber orchestra in Prague, who masterfully played Ethiopian compositions: “To the Master”, “Forgiveness”, “Union”, “Hope”, “Blues” and “My Strong Will”.

For Berhanu Degafe, host of Leza music show at Sheger 102.1 FM, the repertoire of Ethiopian compositions played by foreign musicians gave a unique feature to this concert as compared to Girma’s previous concerts in Ethiopia.

Well known Ethiopian jingles meticulously harmonized and performed by Girma together with his Czech colleagues were what brought the audience to a constant standing ovation. The clarinet performance of Jan Smolík was exceptional as it was beautifully embedded with Girma’s piano touches especially with the two pieces, “To the Master” and “Forgiveness”.

Among the most impressed were Ethiopian musicians who attended the concert. “He [Jan Smolík] really listens quietly on how Ethiopians play clarinet,” Yonas Gorfe, a musician and music instructor, told Addis Standard. “Ethiopians often play clarinet in short notes. That is not usually easy for Western players.”

The admiration given to the Czech quartet is more amplified when it was announced that they only did rehearsals with Girma for three days prior to the concert. Joachim Schmidt, Ambassador of Germany to Ethiopia, provided the musicians with his residence to rehearse for the three days. Having no spare time to spend in Ethiopia, the Czech musicians directly went to the airport after their performance at the Sheraton. Their performance was, literary and metaphorically, one of its kind.

At the end, it was well worth it. Their performances “astonished” Girma himself because he knows he had only a day to discuss about the compositions and two and a half days to do the rehearsals. But two things have played a role in making the concert impeccable: his track record in writing his music scores and their professionalism. “They have huge experiences and good educations,” Girma said. “They are highly valued professionals. They had good techniques.”

For Ethiopian music minders, playing in precision some of Ethiopian tunes composed by Girma, such as “Forgiveness” and “To the Master” requires a sophisticated understanding. “Forgiveness”, for instance, is arranged based on the Ethiopian Orthodox Church’s spiritual tune of “Medina Ena Zelesegna”. It incorporates the spiritual gift of forgiveness into prayer and suffering. It also embraces “forgiving hearts in order to bring hope and winning attitudes”.

Followers of the Ethiopian Orthodox Church almost exclusively play “Medina Ena Zelesegna” during the two months of the main fasting season – often from Mid-February to mid-April. It is mainly played using a single-stringed Ethiopian traditional music instrument called Masinko. Many compare the melody of Masinko with that of the modern world’s Violin. One of the toughest tasks for Girma was therefore to replicate the sound of Masinko into music scores. “Ethiopian music is highly decorated, ornamental and very unique,” Girma says, “writing the score of the music while upholding the essence of the song is very tough.”

Another beautifully played piece on the concert, “To the Master” is also one of the most admired songs in Ethiopia. Originally titled “When I was in the Far East”, the song was first played by the renowned late singer Tilahun Gesesse. The tune’s Japanese music influence had a direct relation with the personal history of the song writer, Sergeant Shewandagne Woldeyes.

Sergeant Shewandagne, who was among the Ethiopian soldiers who fought in Korea under the United Nations military contingent in early 1950s, wrote the song while traveling to Japan for a ten-day break. During his brief stay in Japan, Sergeant Shewandagne fell in love with a Japanese woman and had a chance to appreciate the country’s music. When he came home, he wrote the song that portrays his love and nostalgia. No one, other than the late Tilahun Gessesse, could have probably sung it better. 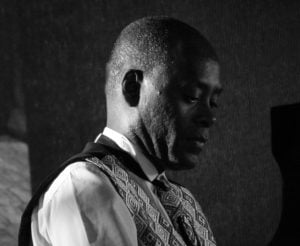 On his night at the Sheraton Girma honored Sergeant Shewandagne by inviting him to his concert and introducing him to the audience. Girma also donated a classical music score of “To the Master” to Yared School of Music of the Addis Abeba University. He also delivered three more scores, which were dedicated to renowned Ethiopian musicians and poets, to the music school. “This is a big triumph for me,” Girma shared his feelings with Addis Standard.

Girma’s donation to Yared School of Music was personal. It was where he was first introduced to the piano at the age 16. The school‘s contribution to the Ethiopian music industry continued until today (it brought up another internationally acclaimed pianist, Samuel Yirga, for example). But Girma’s donation of a classical music score to the School is rare, making it only next to the late Professor Ashenafi Kebede, who is known for his classic “The Shepherd with the Flute”, a piece beautifully re-played by Girma and is included in his new album.

“For non-musicians or people who do not go through this tradition, this may not be easily understood but it is like someone who has written a book, published it and at the end gives it to the public,” musician Yonas Gorfe said explaining the significance of handing over music scores.

The existence of such scores will pave the way for Yonas and Berhanu Degafe’s wish to come true: they want to see Girma performing with a symphony orchestra that comprises as many as a hundred or more musicians.