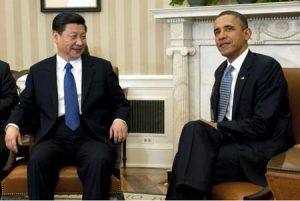 China’s Vice President Xi Jinping recently visited the United States on a trip intended to keep relations between the two largest economies and often mistrustful partners within constructive channels. The visit was also meant to familiarize the figure likely to head China for the next five to ten years with his American counterparts, should they be reelected. Finally, in light of troubled economic times, Xi’s party signed contracts and made modest policy adjustments to benefit some American farmers and businesses and symbolize good intentions. It was an opportunity to lay out many issues forthrightly, but to leave partisan politics out.

Xi’s visit was conceived amid the tumultuous events of 2010, when China overreacted to incidents in the South and East China Seas and on the Korean Peninsula. The Obama administration, seeking to induce Beijing into more constructive interactions among other objectives, proposed a sequence of visits, starting with the January 2011 state visit by President Hu Jintao, a trip to China by Vice President Joe Biden in August, and culminating in Xi’s visit. The idea, put crudely, was to keep leadership skin in the game of high politics, thereby providing adult supervision for two massive and suspicious bureaucracies.

So far, the plan seems to be working well. Despite the anti-China tone of much of the media coverage of Obama’s extensive trip through the Pacific last year, subsequent adjustment of American military deployments to the region, and even a conspiracy-generating episode at the U.S. consulate in Chengdu a few weeks ago, Xi and his top officials have put on a game face. A week before departing for Washington, Xi called Biden, according to the Chinese foreign ministry website, and said, “I look forward to conducting extensive and in-depth discussions with the U.S. side on bilateral issues and other major issues to consolidate the consensus.” Continuing, Xi said, “We hope we can convey a positive message that China and the United States will stick to the principle of showing mutual support to people in the same boat and strengthen cooperation.”

The reference to the “same boat” is from a famous Chinese poem that was used to signify the spirit of the Strategic and Economic Dialogue (S&ED) when it first met under Secretary of State Hillary Clinton and Secretary of the Treasury Timothy Geithner in 2009. The S&ED will meet again this spring to continue the work of resolving concrete issues in U.S.-China relations.

The formal portion of Xi’s visit was his meetings in Washington. Xi has a plenary meeting on February 14 with Biden and representatives of several agencies, where presumably the two sides have rendered their standard talking points on the main issues between the countries. It was followed by a more intimate meeting between the two vice presidents, where more sensitive points were likely made. Trade, Taiwan, Tibet, and human rights were certain to be among them. U.S. officials are acutely aware that Xi is still an heir apparent and not yet in a position to deal as if he is already China’s leader. At the same time, they owe him and their fellow Americans frank discussion of the real issues he will face once he is elevated.

President Obama received Xi in the Oval Office, where the main objective should be to establish a personal chemistry and basis for direct communication. Xi is said to be less formal in his exchanges than President Hu, though many say he has a hard inner core that belies his softer appearance. If Obama is reelected, it is likely to be these two men who pick up the phones when things go wrong or help is needed. Personal trust and clarity will be at a premium. The protocol treatment given Xi will be measured minutely. Ritual ranks high on the Chinese scale, and they will count the minutes spent with Obama.

The Congressional leadership of both parties engaged Xi the following day and presumably emphasized issues of key concern to them behind closed doors. a

An accompanying party of Chinese business leaders and commercial officials met with the leaders of ten large American businesses and some contracts were made. A key issue was expanding the limited number of American films permitted to be imported into China each year, driving many of those not approved into the market for pirated films. Concluding the Washington portion of his trip, Xi made a policy speech at a large luncheon hosted by civilian American associations with extensive China business and other ties.

From the beginning of the planning process, Chinese officials have shown an interest in Xi engaging in people-to-people activities that convey personal warmth. With that in mind, Xi flew to Muscatine, Iowa, where he made a home stay during a visit as a provincial official in 1985. He dined with Governor Terry Branstad, whom he also met in 1985.

His last stop was in Los Angeles, where Mayor Antonio Villaraigosa has been courting Chinese interest in investing in the city’s infrastructure. Again, some symbolically important contracts were signed before Xi departed for Ireland and Turkey.

Media figures, especially the White House press corps, are interested in how Xi’s visit will play in the American election campaign. Mitt Romney energetically criticizes China and Obama’s policy, and Obama and his West Wing team are equally eager not to let Romney outscore him in being tough. This helps account for two scratchy messages from the Obama administration: the foreign policy message of working through difficult issues constructively and the more contentious political message that Obama is being tough and confronting his Chinese counterparts.

If the Obama team wants to turn Xi into a more mistrustful counterpart and corner him into taking tough stances when he is actually in authority next year, pressing him now (while he is still the presumptive leader being watched by all Chinese for how he behaves) will be just the right formula. Instead, this would be a good time for Obama and Romney to represent America’s issues frankly and privately, but give partisan politics a time out.

The writer is vice president for studies at the Carnegie Endowment for International Peace. Addis Standard received this article from Policy Pointers.

The toll of ‘moral underdevelopment’