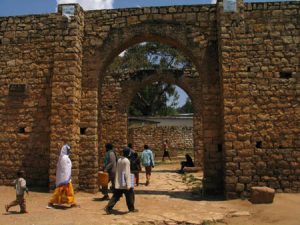 When I first planned to go to Harar a few weeks ago, I never thought to experience anything new. All that I had imagined was an old city (probably half in ruin) surrounded by its inhabitants deeply addicted with khat (a mild narcotic) and Shisha (Hookah). On top of that my previous information about the people of Harar, a city in the eastern part of Ethiopia some 336 kms from Addis Ababa, was not a pleasant one. I heard that socially they were careless, less trustworthy and that they curse each other as if they are blessing one another.

Packing my stuff for the trip all I was trying to do was paint a clear picture of Harar in my mind. I have tried to associate one story to another. I thought about my Harar born college roommate. I remember he was the best roommate in my time through college and that none of his personality traits fit to all the information I heard about the people of Harar.

So I thought all what I heard about that old city must be a prejudice. But I needed to see it firsthand. So off I went.

I arrived in the city of Harar, early in the morning, so I took the chance to cruise through the streets by foot. Contrary to my expectation the town was calm and has a graceful presence.

The city of Harar…

Harar is an ancient walled city (the old town is surrounded by five famous gates scattered in all four corners). It is also a city awash with medieval architectures unusual in most parts of Ethiopia. Harar is a lively city inhabited mainly by Hararis and Aderes. But unlike other cities famous for their ancient history, Harar has a sense of quietness and relaxed atmosphere.

Most notably (apart from its walled gates built to protect the people of the city in the medieval times), Harar is a city home to the House of Arthur Rimbaud, the French poet and alleged arms dealer and the ancient mosque of Abul Bakir, a mosque which is said to be built some 1000 years ago. Abul Bakir is considered as holy as Mecca of Saudi Arabia for the Muslim population of Ethiopia. Interestingly though, Harar is also where Emperor Haile Selassie I, the last monarch to rule Ethiopia, grew up as a kid, although the ranch where he grew up is in a bad shape and unrecognizable. 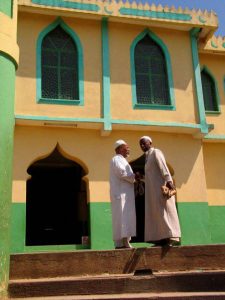 One of the five gates often referred to by many Aderes and Hararis is the gate through which Richard Burton, the 19th century explorer, passed in 1855. It is said that Burton was the first white man to pass safely through the then closed city of Harar, which was alreday a holy city for Muslims. Unfortunately, any foreigner was regarded as an “infidel” and would be executed if found wandering around. There is a controversial account of how he managed to escape execution: he wrote he had successfully dressed as an Arab and used his flawless Arabic to communicate with the locals. The Aderes say they knew his identities all along but were impressed by his inquisitiveness to spare him of what would have easily been a gruesome end. Seeing their politeness to a stranger, it would be hard not to believe their side of story.

Wondering if it was not a good idea to cordon off the city of Harar as a designated ancient site, I left the main road and went through one of the high-walled road. To my surprise the walls and the surrounding roads are cleaner than the original picture I had tried to paint in my mind.

The next morning I had a chance to catch up with some of the Harari people. My original plan was to spend only the morning with them, but I it was hard to stick with my plan. The people are completely different from other Ethiopians I have had a chance to meet elsewhere. Their heartwarming are hospitality game me the impression that I was only there to make them happy. They are forthcoming and display some undeniable degree of honesty, but most importantly, they don’t seem to be bothered about the presence of a stranger in the midst of them.

All that what matters most to the people of Harar seems the present; many of them don’t seem to have the slightest worry about what tomorrow is or should be. No one seemed to be bothered to know where I came from and why. Unlike other places the city is packed with elderly people that know plenty of things about Harar, Ethiopia and the rest of their environs and are willing to share what they know with any stranger.

A display of contentedness and smile is what often accompanies the faces of everyone from the elderly to the young to the children on the streets of Harar. Most of the people are ready and willing to share their love, their house, their meals, and almost everything that belongs to them with a stranger.

Nightlife in Harar is unlike any other cities in Ethiopia when particularly such cities are Muslim dominated ones. It’s very easy to lose track of oneself while wondering from one bar to the next, which gave no indication whatsoever that the city is also home to more than 80 Mosques and a majority of Muslim community. It is almost like a divine lifestyle accompanied by the grace of the town that has so many untold stories and undiscovered treasures buried deep inside every individual and every curve in the city.

Where Khat is a beautiful thing to do

Chewing khat (Chat), the mild narcotics widely common in Yemen, is an everyday ritual for almost everyone in Harar, a place where the best Khat bush is growing. Conspicuously, it is easier for a stranger to accept the humble invitation by the people of Harar, extended to everyone regardless of religion, ethnicity and gender, to chew kaht  (ceremoniously or casually) than to shun. It is the best moment for easy socialization and a lasting memory of the times spent in Harar.

There are two ways to go about chewing Khat: many people in the streets of Harar go about doing their daily business while chewing Khat, (it is not unusual to see men of varied age smiling with a totally green, or worse dark, teeth and a cheek stuffed with ball of the green leaves of Khat); it is an unsightly way of looking at a man’s face, but it’s widely accepted. The most popular way of chewing Khat, particularly in the presence of a visitor, is one that is done in a more organized ceremony at a house decorated with Arabian mattresses where the men and the women lean on for hours and chew.

The side effects of Khat are hardly a topic in Harar. For an outsider like me, there is a direct relation between some of the unsettling acts of men in the streets of Harar and Khat, but the passionate people of Hara hardly draw a parallel between Khat and some of the mad men on the streets.

For now who cares? Recently, I am engaged in quiet a few travelling adventures across Ethiopia. But I haven’t seen a city that, for some inexplicable reasons, gave me the beauty and the harmony of itself and that of its people all in one like the city of Harar did.

The lasting memory I have, as I prepare to leave the city, was not the image I had earlier painted in my mind of a city in ruin, but that of an unforgettable site and moment of the city of Harar and its people.  I don’t know about Paris, I have never been there, but Harar is a city of love.

Senegal: When enough is enough and the people know it as that