Addis Abeba, June 13/2019 – The House of People’s Representatives (HoPR) have today approved the appointment of four new board members of the National Electoral Board of Ethiopia (NEBE).

The Parliament received list of the nominees forward by PM Abiy Ahmed for approval and approved the four names: Bizuwork Ketete (W/ro), Dr. Getahun Kassa, Abera Degefu and Wubshet Ayele, with 17 objections. The later, Wubshet Ayele, will be the deputy chairperson of NEBE, which is currently led by Birtukan Mideksa, a former judge and opposition party leader. Birtukan will remain in her position as Chairperson of the board. Wubshet is a judge at the federal high court and is chairman of political parties consultative forum.

The other three board members came from various career backgrounds. Accordingly, Bizuwork Ketete (W/ro) is head of good governance department at Ireland embassy in Addis Abeba; Dr. Getahun Kassa, legal expert and advisor at the legal advisory council currently advising at the office of the federal attorney general’s office on judiciary reform; and Abera Degefu, a lecturer in various universities.

However, MPs who objected the approval raised concerns that the nomination process conducted by PM lacked clarity and did not consult EPRDF’s ally parties, an accusation dismissed by the government representatives who responded that only about 20 political parties reacted to the PM’s call for consultations.

The number of board members was reduced from nine in the past to five currently following ongoing reforms being undertaken by NEBE. Accordingly, in April this year, PM Abiy Ahmed established a committee to shortlist list of nominees. On May 21, the committee completed its preparations and announced the opening for submission of names of nominees. According to Dr. Meshesha Shewarega, chairman of the committee, by the end of the deadline on May 30, some 200 names nominees were forwarded from members of the public. Out of the 200, eight nominees and one reserve nominee were shortlisted and sent to the PM Abiy for shortlisting. The four members approved by the parliament today were therefore the finalists nominated by PM Abiy Ahmed. 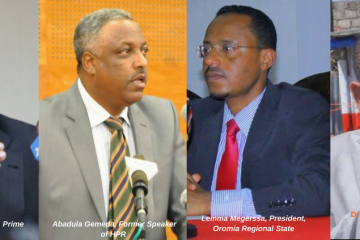