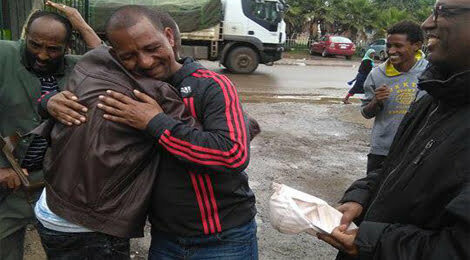 Abraha Desta, executive member of the opposition Arena Tigray, who has been arrested exactly two years from today, has just been released.

Abraha was arrested shortly after Ethiopian security officials took Andargachew Tsige, a British national who is now on a death row in Ethiopia and a senior member of the outlawed Ginbot Seven (G7) opposition group, from Yemen.

The arrest of Andargachew was followed by a massive crackdown against three opposition parties which saw the arrest of four individuals from Semayawi party (Blue party), Arena-Tigray party and Unity for Democracy and Justice (UDJ/Andinet) party. All were accused of having links with Ginbot Seven.

During his arrest, Abraha has just been elected to the executive committee of the Arena Tigray Party, which has a popular base in Tigra regional state in northern Ethiopia. Tigray is also the stronghold of the Tigray People’s Liberation Front (TPLF), the all too powerful party within Ethiopia’s governing coalition EPRDF.

Abraha Desta, a philosophy lecturer at Mekelle University in Northern Ethiopia, is widely known for his active social media engagement and fierce criticism against the ruling party in Ethiopia. He was arrested along with three other opposition members: Habtamu Ayalew and Daniel Shibeshi of UDJ/Andinet, and Yeshewas Assefa of Semayawi (Blue) Party. All of them were later acquitted by a federal court in Addis Abeba, but Abraha was handed a year and four months sentence in jail for contempt of court. He often confronted judges during his trial.

The other three were released earlier, but prosecutors have appealed against the acquittal and their case is being seen at the Supreme Court. However Habtamu Ayalew has fallen ill since his release and is now in a hospital bed in what family members say is critical but stable condition. His lawyers have appealed to the Supreme Court to lift travel bans against Habtamu to help him get medical treatment abroad. The court hasn’t yet decided on the matter citing the need for a referral letter from the hospital’s board of directors.

Cover Photo: Abraha being greeting by family members and friends

Struggles of an aspiring singer