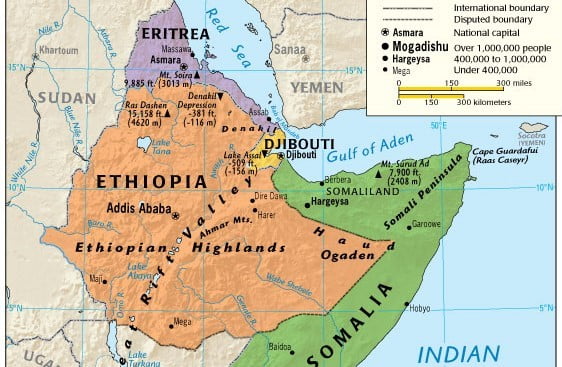 Addis Abeba, June 12/2017 – The year 2016 placed Ethiopia on major newspapers across the world including Financial Times, and Washington Post as well as major broadcast media outlets such as the BBC and Aljazeera all due to the persistent, widespread and escalating anti-government protests that engulfed the country.

The question many asked was “Why are Ethiopians protesting?”  Ethiopians were protesting mainly because of, to refer to a July 2001 research by Acemoglu, Johnson and Robinson: “state and private predation”, (not to be confused with lack of good governance or corruption); state violence; and repression of democratic rights.

In this article, I will use a political instability forecasting model developed by Goldstone et.al (2010) to assess the situation in Ethiopia.

Goldstone et.al (2010) model is distinguished by its accuracy, simplicity, and policy implications. The model accuracy is impressive, exhibiting 80 percent accuracy in predicting the onset of political instability with a two-year lead time. It is unique in the sense that its policy implication – that is, political institution reform – is both within reach in the short term and the least costly option for national and international communities. The model is simple in its specification, too, and it uses only four variables in estimation. The four explanatory variables are infant mortality, conflict in neighboring states, political and economic discrimination, and regime type.

The model predicts an increased likelihood of political instability in countries that exhibit one or more of these factors: high infant mortality rate, location in conflict-prone neighborhood, discrimination against one or more minorities, and a non-democratic regime type. Instead of using a binary measure of regime type (autocracy/democracy) or a three-category measure (autocracy/anocracy/democracy), Goldstone et.al constructed a new categorical measure of regime type. They did this by using the two-polity component (openness in executive recruitment and competitiveness of political participation) from the polity data set and creating a two-dimensional space that can be used to identify the regime types of full autocracy, partial autocracy, partial democracy, partial democracy with factionalism and full democracy. (Please See table below.)

Where does Ethiopia stand along these four independent variables?

The second variable is whether the country is located in conflict-prone neighborhood. Ethiopia shares borders with six countries: Somalia (1640 km), South Sudan (1299 km), Eritrea (1033 km), Kenya (867 km), Sudan (744 km), and Djibouti (342 km). Based on data from the Center for Systemic Peace’s Major Episodes of Political Violence, Ethiopia is situated in a neighborhood ravaged by prolonged conflict. Somalia, which shares the longest border with Ethiopia, has suffered an ongoing civil war since 1988 that claimed the lives of more than 117,000 Somalis and led to the migration and displacement of hundreds of thousands of its people. South Sudan, which shares the second longest border with Ethiopia, has gone through a devastating civil war (1998-2014) and an ongoing ethnic violence with a loss of 16,000 lives. Eritrea (part of Ethiopia until its succession in 1991-2) experienced war with Ethiopia itself from 1998-2000, a war, which, by many estimates, cost the lives of more than 70, 000 on both sides. Kenya, a relatively stable country, has been subject to spurts of ethnic violence between 1991 and 2008, costing 4,300 lives. And it is estimated that the 1983-2002 ethnic war in Sudan had claimed the lives of nearly one million Sudanese; and the recent ethnic violence (2011-2014) has claimed 4,000 lives. Djibouti’s civil war (1991-1994) had also led to the death of 1,000 people in the tiniest Horn of African nation.

It is clear, then, that Ethiopia is surrounded by countries characterized by recurring ethnic violence and civil war. There is a need to analyze this “neighborhood factor” in Ethiopia by incorporating four other factors that significantly increase the impact of a “bad neighborhood” on political stability.

First, Ethiopia itself is marred by its own civil war. Its struggles with Oromo separatists (1999-2000) and ethnic violence among the Somali and Oromo people (2007-2014) have resulted in the death of thousands.

Second, Ethiopia is directly involved in either peace-keeping missions (in the case of Darfur in Sudan and Somalia) or in conflict (in the case of Somalia and Eritrea) which have separate implications in several neighboring countries.

Third, the prolonged nature of the conflicts in these neighboring countries and within Ethiopia itself add another dimension.

The third factor is whether there exist political or economic discrimination. According to the Minorities at Risk Project by the Center for International Development and Conflict Management (CIDCM), four ethnic groups are subject to discrimination in Ethiopia: the Oromo, Somali, Amhara and Afar. Although to a lesser extent, the report also named Tigreans as a minority at risk, stating that:

“Currently, Tigreans possess special status within Ethiopian politics and society with the best official posts, military positions, and of university slots allotted to those of the Tigray province … While Tigreans remain an advantaged minority in Ethiopia to date, it is unclear whether the EPRDF’s mix of political maneuvering and governmental heavy-handedness will last.”

In addition to the minorities subjected to political and economic discrimination, the Political Instability Task Force (PTIF) has identified possible target groups of genocide and politicide in Ethiopia, including supporters of the Oromo and Somali secessionists (2001, 2005 and 2011) and the people of Gambella (2005) and Anuak (2005, 2011).

The last variable of interest is regime type. Ethiopia had a partial democracy with factionalism from 1995-2000 but then transitioned to a partial autocracy from 2005-2014. The country’s score worsened in terms of executive recruitment, dropping from a 7 (transitional/restricted election) to a 3 (designation). This suggests that executive recruitment is not competitive, but rather closed to contestation. The second component, competitiveness of political participation, has remained factional since 1995. It is evident that the relationship among political elites has not improved in the last 20 years, and the political sphere in the country remains exclusive.

Ethiopia’s status based on these four variables indicates that the country is highly likely to experience political instability (civil war or adverse regime change) in the near future. It is imperative that all concerned parties- the Ethiopian people, political groups, civic society, the international community and donor countries, step up their efforts to prevent the onset of political instability in Ethiopia and the Horn of Africa.  AS

ED’s Note: the author can be reached at gurradimae@gmail.com