On Friday, 11 March 2011 the Japanese coastal city of Tohoku was hit by an earthquake of a 9.0 magnitude with the epicenter approximately 70kms east of the Osheka peninsula of Tohoku.

The earthquake had triggered a powerful tsunami waves that reached heights of up to 40.5 meters. Furthermore, cooling systems in one of the reactors at the Fukushima Daiichi nuclear power station in the Fukushima prefecture failed shortly after the earthquake, causing a nuclear crisis. This initial reactor failure was followed by an explosion and eventual partial meltdowns in two reactors, followed yet again by a fire in another reactor which released radioactivity in to the atmosphere. 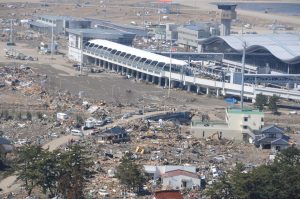 It was a series unfolding of a devastating human catastrophe. Even now after a solid year has passed, imagining the situation in the shoes of the people of Tohoku is incomprehensible. It feels like the end of everything. With a registered casualty rate of more than 15,800 deaths, 3,200 missing persons and over 600 injuries in one place, it can simply be considered as nothing but hell on earth.

That was what I thought until I visited a photograph exhibition commemorating the first year anniversary of the disaster, which was organized by the Embassy of Japan in Addis Ababa and was held at the national museum Sidist killo.

When I first plan to visit the exhibition my expectation was simple: I walked in to enjoy Japanese art and creativity in photography. But once I was in, I found it was more than the conventional Japanese photographic collections.

The exhibition is perfectly designed to grasp and swing the attention of the visitor’s emotion in these before and after extremes.  The pictures hanging at the exhibition trailed one after the other and showed the devastation at the same place.

Then in came the pictures that, for me, were a sight for a sore eye: the Sendai airport completely restored and ready to provide service. It was followed by a section of Joban expressway which caved in to the earthquake on March 11. But which, after so much destruction, by March 17, was opened for traffic.

More than 50 photographs were displayed at the exhibition: all of the pictures showed the story of hopes, of dreams and of togetherness; the story of adversity and creation altogether.

If anything goes by to show how resilient Japan is in the face of unimaginable natural disasters, this exhibition held plenty of answers.

Without a shred of doubt the Tohoku earthquake marks one of the darkest moments in the lives of millions of Japanese but it was also a significant moment (unfortunate it was) in the history of mankind that showed the world how to survive, and then thrive.