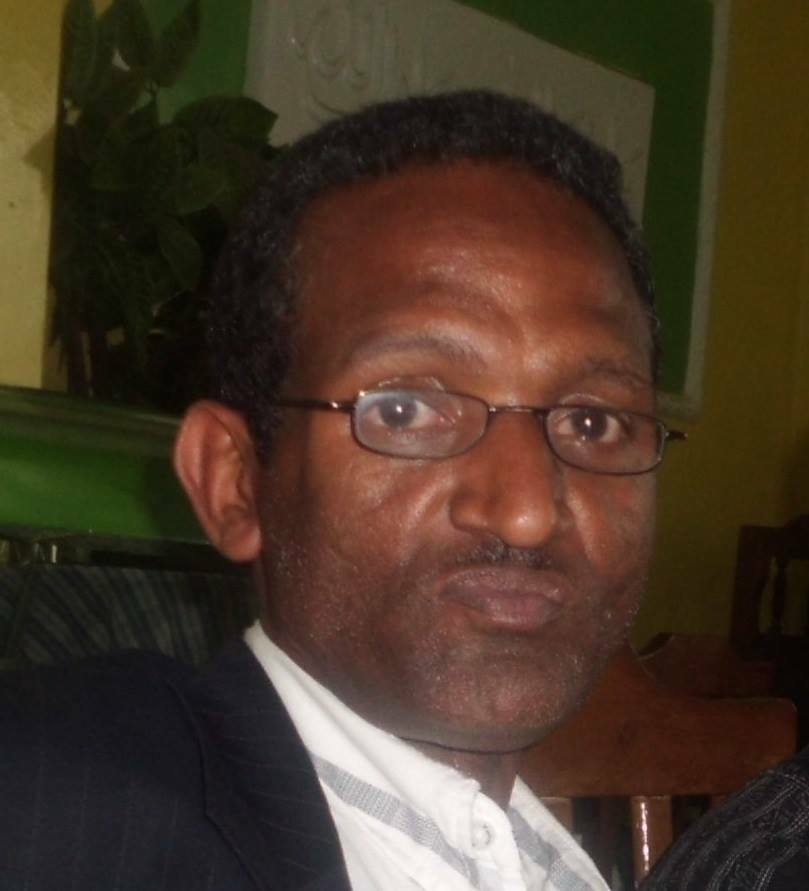 First my greetings to all the people of Ethiopia, who made me who I am today so that I can serve them back in my profession as a journalist; the ones who are still suffering under this repressive regime while struggling in search of freedom and good governance. To the Ethiopian Muslims, who are suffering under ruthless successive regimes, but continue struggling tirelessly to make sure our religious rights are restored and respected; and also to the “Dimtsachin Yisema” activists who strive to make our voices heard.

To all of you who are suffering the departures of your loved ones to the dungeons of this regime we have; and to all the international organizations who stood by me during this testing time; The Committee to Protect Journalists (CPJ), Reporters Without Borders, and Amnesty International, among others; to local and international media outlets who are the voices of these who are rendered voiceless; and Lastly to my families (especially my beloved wife and children) and friends, who are suffering as me, if not more.

I take pride in having served the people of Ethiopia for the last 18 years as a journalist, struggling to ensure civil liberties and religious rights to those whose voice I have amplified in the line of duty.

I have been imprisoned multiple times doing my job, journalism. Even though I am now deprived of my profession, I assure you that I stand strong in the face of the recent unjust conviction of the oppressive court on January 05, 2017 through hostile judges. If anything, their decision has strengthened me to stand committed in the struggle for civil liberties and democracy in our homeland.

In the last two years, I have witnessed the extent of the brutality of the Ethiopian regime and all the blood it has spilled all over this land. I have witnessed the broken justice machinery, its policies, its powerless judges, and prosecutors—that have all drifted far from the public interest. Now it is clear to me that all this dirt will not be clean with a light brush. It takes a deep systemic shrug. That’s what makes me feel good about the sacrifice I am paying now in prison.

I have chosen to become a journalist fully aware of the dangers of being a journalist in our tyrant-ridden continent, Africa. The danger is visible especially in a country like Ethiopia where Journalists are languishing in jail for doing their job.  Journalists such as Yusuf Getachew, Temesgen Dessalegn, and Eskindir Nega have paid a lot of sacrifices. They indeed deserve our respect for their sacrifices.

Since you might have already seen the reports in the media, I do not see the need to reiterate all the violations of our rights in the courtrooms and how the judges and prosecutors have done their best to silence our voices during the court proceedings. Facing injustice on January 05, 2016 – the day injustice was done against me and my co-accused fellows – the only reason that I remained silent was only because all the 19 defendants chose not to speak in defense. After all, what is to defend while appearing before a compromised court which is at the heart of broken justice machinery?

Our case has been deliberately presided over by at least 14 different judges and 7 different prosecutors in one year and five months period of time. The motive was clear – making the case complicated and fabricating incoherence.  Though we had complained to the court about this frequent changes, both in written and verbal forms for 17 times, we only heard back five times.

Adding salt to the injury, while we were accused of the unconstitutional Anti-terrorism Law, the Presiding Judge, Abuhay Guade, was labeling us ‘Terrorists’ on various sessions and all before the orchestrated conviction. Obviously, not even a single witness has presented substantial evidence that we were ‘terrorists’. The government witnesses failed to prove anything against our case except confessions acquired through torture in Maekelawi prison as per Article 27 (2) of the Ethiopian Criminal procedural Law, which is unconstitutional. Even though the unconstitutional confessions under duress of torture were incomplete, and nothing has been presented as evidence, the judges have decided that all of us the defendants should defend the bogus chanrges labeled against us. This shows nothing but a clear manifestation of Ethiopia’s broken justice system.

Seeing that the judges were only in the court of law to warm their chairs and act out a scripted theater, we came to realize that speaking in defense would do nothing for us except a waste of our time and elongation of our agonizing stay in Kilinto prison’s remand center. Understanding that we couldn’t change this decision we chose to notify the court on our decisions to waive our right of defense.

Of the fat 997 page charge presented against us, there is no single statement or a shred of evidence that shows the damage of a single property or risk of life. However, I, along with my colleague Journalist Khalid Mohammed and other innocent Muslim brothers with us were accused of violating the draconian Ethiopia’s Anti-terrorism law, which is condemned globally. It was clear that our accusers had no idea of a good judgment and were devoid of any sense of justice. Accordingly, we didn’t see the need to present a defense against such a charge cooked by loyal regime cadres and acted out by prosecutors.

Article 142 of the Ethiopian Criminal Procedural Code provides that a defendant should present his/her defense only after witnesses have been heard in accordance with the charges against him/her. But we have been asked to present our defense without witnesses proving the accusations labeled against us. Our complaints have been repeatedly disregarded, which made us believe that justice was very unlikely to be served. This is not a decision we reached out of simple feelings. Rather it was substantiated in the wake of the prosecutors’ and the judges’ frequent violation of our constitutionally guaranteed rights. Thus, we chose to let them do whatever they wished without presenting any defense.

Having faced five months of the agony of torture and violent interrogation at Maekelawi, we decided to give up on the hope of getting justice which was very painful both to us and to our families. That’s why we chose to leave aside all that misery and pass it over to the judgment of history and the people of Ethiopia.

Furthermore, it has been seen on January 05, 2016 proceeding that the judges wanted to convict us unjustly as per Article 7/1 of the Anti-terrorism law in a reference to a medium degree of severity. This was clearly a manifestation of their blind hatred and a reflection of the order they have received from the regime. The court hearing that was held early morning ended in sentencing all the defendants except me with five years and six months of rigorous imprisonments. The only exception was my case in which I was given one year less sentence due to my deteriorating health condition. But, all this injustice was not unexpected.

After our repeated attempts to prove our innocence came to no avail, we have chosen to keep quiet during the subsequent trial because we didn’t want to endanger our loved ones who came to our trials ridden with emotions and anger.  Otherwise, the accusation was totally bogus. We have done nothing but reporting the globally praised and the most peaceful Ethiopian Muslims resistance against the interference of the regime in religious affairs. We should have been praised for reporting on such a peaceful movement and not punished for it.

The unjust conviction and the rigors sentences followed only vindicated us and proved our innocence as citizens and journalists who strive for the betterment of our own country. It is nothing but the reflection of our search for justice and freedom. Rather the conviction made us become more committed to the voices of the people on behalf of whom we chose to speak.

Our oppressors will have to understand that we will do our best to amplify the voices of millions till our very last breath. They will have to realize that it is impossible to cover up the truth and the struggle for justice by imprisoning journalists. If repressions could have stopped people from the fight for justice, we wouldn’t have seen the continued struggle although thousands continued to languish in jails and detention camps all over the country.

This is my short message: despite my prison sentence and my deteriorating health condition, I assure you that the hardship will not deter me from my commitment to my profession as a journalist. And I am sure all this shall pass and I will return to my beloved profession.

Finally, I would like to express my gratitude to all those who stood by me during my hardship in prison and in a hospital. I wish that one day my beloved country will be one in which equality is guaranteed, religious rights are ensured and its justice–craving citizens are united in prosperity. I long for that day where the despairing citizens will once again reclaim back their own country to live in freedom and dignity.