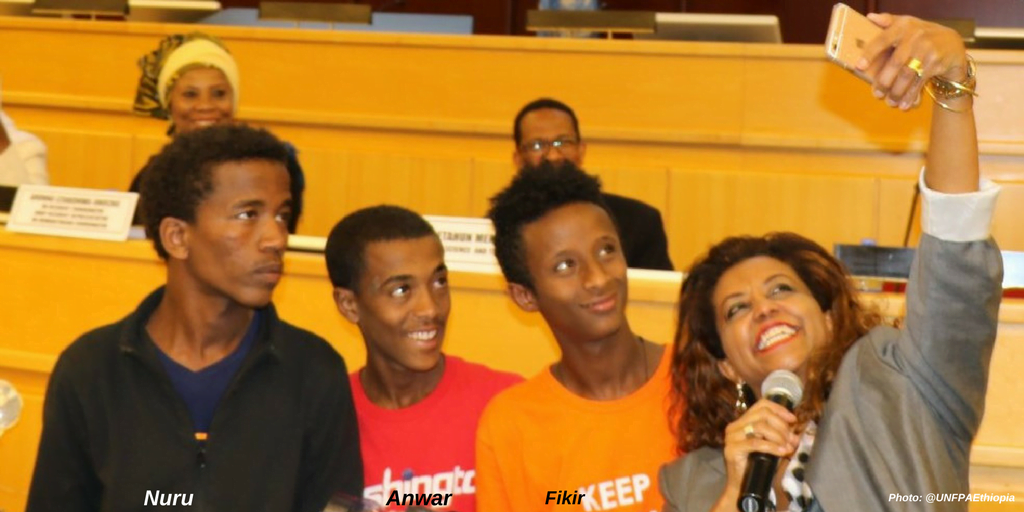 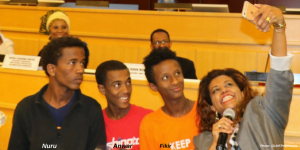 Dr. Elleni enjoying a selfie with the “Kombolcha Trio”

Addis Abeba, August 30/2017 – At a day-long forum held at the UN conference center on Tuesday August 29 under the theme “Ensuring Creative Innovative Spaces for Youth Engagement in Ethiopia”, three 17 year-old student innovators who traveled from Kombolcha, about 255 Km North–East of Addis Abeba, became the unexpected spotlight of the show.   The three young creative (and curious) students: Nuru Jamal, Anwar Wudu, and Fikir Legesse, have showcased their hand-made products that include, among others, a solar operated water pump, FM broadcaster, a helmet with a fan, a spy robot, a traffic jam censor (and yes, a web browser that doesn’t recognize Facebook!), to a roomful of applause and admire.

The “Kombolcha Trio”, as they were quickly referred to by other young participants, said they have taken their creative ingenuity after observing the works of different organizations and spending much of their off school times trying to create their own.

Of all their innovations, the water pump was the one that received more attention from some participants as it works with solar power and is environmentally friendly. And Nuru told Addis Standard that officials from, MeTEC, Ethiopia’s army business empire, have shown  enthusiasm for the spy robot.

The trio have previously been to Addis Abeba to compete on the annual youth innovation program organized by the Ministry of Science and Technology, but they were rejected because they didn’t have the proper tool kit, which, according to them, would have cost them around 5,000 birr (around US$210).

Then, an advice from an informed friend who knew about blueMoon, a recently established initiative and told them to visit the office. There they met with blueMoon Founder and CEO, Dr. Elleni Gabre-Madhin. “I cried with them when they came and told me their stories,” Dr. Elleni told a group of journalists outside the conference room. It was indeed a perfect match with what blueMoon stands for, which is, “to discover, nurture, and fund exceptional agribusiness ideas among youth that are innovative, scalable, and have huge transformational potential.”

The trio don’t even know English language well but they taught themselves on the internet, according to Elleni, who expressed her concern that the education system in Ethiopia may fall short of meeting their talents and expectations. “Centers to support these kinds of kids should be organized and the internet should be available free for them,” she said.

Lucky for them, Dr. Elleni’s blueMoon is currently supporting them financially and providing them with further training opportunities.

Yesterday’s event was organized by the UN in Ethiopia, in collaboration with Ethiopia’s Ministry of Youth and Sports and in partnership with blueMoon, Entrepreneurship Development Center (EDC), Impact Hub Khartoum, Xhub and iceaddis.

“The forum links to the African Union declaration of 2017 as the year of Harnessing the Demographic Dividend through Investments in the Youth,” UN in Ethiopia said in a press alert. AS

Ed’s note: the part about MeTEC representatives has been removed from the original story as it was wrongly asserted. Representatives from MeTEC were not attending the event, but have shown interest for the spy robot, according to Nuru, who spoke to Addis Standard.

We regret the error.