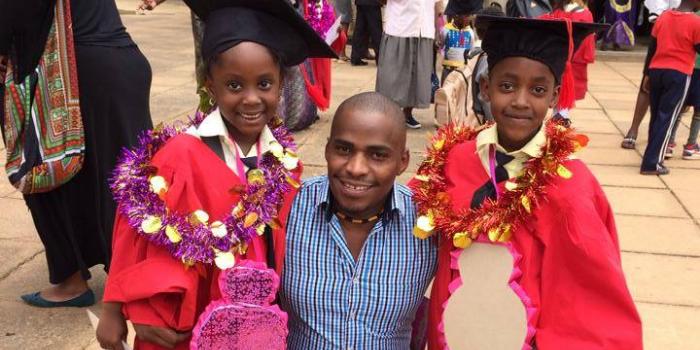 Addis Abeba Dec 12/2016 – The body of a Kenyan engineer who died while in an Ethiopian prison has arrived home on Thursday Dec. 11th.

Zak Muriuki, a father of two girls (pictured) and a tech engineer by profession, arrived in Ethiopia nearly two years ago on January 9, 2015, according to information obtained by Addis Standard. He was arrested on January 10 along with another Kenyan, Jadrick Mugo, who is still in prison.

Zak and Jarrick were subsequently charged with “telecommunication fraud” and were facing trials at the Arada High Court Penal Division here in the capital.

Zak was sent to Ethiopia by Intersat, the company he was working for to “help a client install VSAT equipment ”. According information in the company’s website, “Intersat is one of the largest and most respected providers of Internet solutions in Africa providing Internet via Satellite connectivity to some of the leading organizations, government institutions and the private sector.”

“The two had gone to Ethiopia to install VSAT equipment for a customer. This was a normal routine assignment and they had been there before and came back home safely. However, this time around, the customer’s site was raided by Ethiopian police and the 2 arrested and booked by the police,” an anonymous source who spoke to Kenyans said.  Addis Standard learned that both were arrested in Jigjiga town, the capital of the Somali regional state in eastern Ethiopia some 600km from the capital Addis Abeba.

“Zack is back home from prison, after 20 months, in a coffin. He died in an Ethiopian Jail… and we could do nothing about it,” wrote Joseph Ogidi, a presenter at Radio Africa, on his Facebook page. “We are angry…. you should be to. Share and let this government know we are angry.”

According to a source here in Addis Abeba, Zak was held in Kality prison in the southern outskirt of the city, where Jadrick is still detained at. His trial was largely marked by “lack of witnesses, translators [and absences of prosecutors]” on hearing days. The hearings were happening “almost every two month but they [the court] would push the dates forward on flimsy grounds.”

Zak and Jadrick were sent by two different companies “but they hired the same lawyers in Addis”, our source said, “apparently, the lawyers appear to be cons. Out to milk the companies.” Addis Standard couldn’t establish the names of the lawyers representing the duo.

In the last several months Zak was being treated for meningitis but he was not able to get proper medical care in time. He is believed to have died of it. His “family opted not to have an autopsy here [in Addis Abeba],” our source said.

Ethiopia is home to several prisons notorious for their widespread abuses of detainees.

Kenya and Ethiopia enjoy a robust diplomatic relations. Recently, Ethiopia announced that it would back the candidature of Kenya’s foreign affairs minister, Ambassador Amina Mohamed, in her bid to replace the current chairperson of the African Union (AU) Nkosazana Dlamini-Zuma come January.  On Nov. 29 Ambassador Amina launched her candidacy in Addis Abeba. She met and held bilateral talks with Ethiopia’s Prime Minister Hailemariam Desalagn the next day. It is not clear if the issue of the two Kenyans in Ethiopia’s jail was discussed during their meeting.  AS

Ethiopia: A new Human Rights Action Plan as country plunges in opposite direction