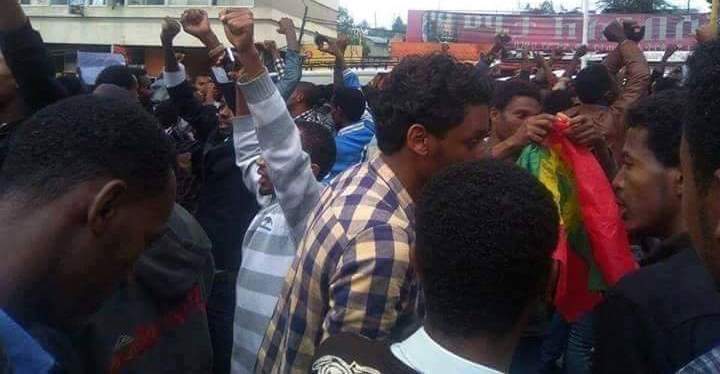 Addis Standard has so far received reports of the death of more than 50 Ethiopians in Oromia and Amhara regions of the country following massive anti-government protests over the weekend, during which the government entirely shut down internet connections throughout the country.
According to several tips received by Addis Standard from individuals who want to remain anonymous for fear of repercussions, death tolls were high in West Arsi (in Assasa, Adaba, Shashemene and Kofele cities), West Shewa in the city of Ambo and Ginchi town, east Hararge and east Wolega of the Oromia regional state. Accordingly more than 30 individuals were believed to have been shot dead by security forces on Saturday alone. Hundreds of protesters have also sustained gunshot wounds; hundreds detained by security forces while several people have disappeared without a trace.
A university student in Ambo who is originally from Dambi Dollo in Wolega called Addis Standard on Sundays with information that the police have abducted both his brother and his father “from their home on Saturday night. “
Further tips from northern Ethiopia also indicate that more than 20 individuals were killed on Friday and Saturday during protests in Gondar and Bahir Dar cities, ancient histories city home to thousands of tourists and the capital of the Amhara regional state respectively. It is believed that more than 20 individuals were killed by security forces. According to the government’s own account, seven people were killed in yesterday’s protest rally in Bahir Dar city, while five police officers were hospitalized. However, unconfirmed reports on social media claim the number to exceed 30.
The weekend protests in Bahir Dar followed a previous protest held between July 12th and 14th in which more than a dozen people were killed and a massive peaceful protest in the weekend of 30-31 July in Gonder city.
The protest in Amhara region followed a raid by heavily armed federal security forces, including the Anti-Terrorism special force, targeting members of the Wolkayit community who have been protesting against the federal government’s decision to incorporate the area where the community lives into the Tigray regional state. The Wolkayit community members also reject the idea of them being ethnically considered as Tigrayan and want to identify themselves as Amhara.
More causality feared
The death toll from both regions could reach as high as 80, according to online activists who post pictures of individuals who have died or have sustained severe wounds caused by gun shots.
The weekend region wide anti-government protests in Oromia regional state were called by online activists of the #OromoProtest, a persistent anti-government protest by Ethiopia’s largest ethnic group, the Oromo that lasted for the last nine months.
Accordingly, protests have happened in almost all major cities and small towns across the Oromia regional state, the largest of the nine regional states in Ethiopia home to close to 40 million of Ethiopia’s more than 100 million populations. Here in the capital Addis Abeba, a city originally belonging to the Oromo, police have quickly, and brutally dispersed protesters and have sealed roads leading up to Mesqel Square where online activists called for the protests to happen.
According to a recent report by Human Rights Watch (HRW), more than 400 Oromos were killed by security forces since the ongoing protest first flared up on November 12, 2015 in Ginchi, a small town some 80 Kms South West of the Capital Addis Abeba. In Addition to the report by the HRW, activists are also documenting the death, injuries and forced disappearances of individuals from areas where protests are taking place. Hundreds of University students have also been dismissed from several state universities located in the region.